For the first time in US history, the celebration of the birth, enlightenment and passing away of the Buddha (Vesak), was held in the White House today. In honor of Vesak, an official statement from the White House has been announced by President Biden:

“Jill and I extend our warmest wishes to Buddhists in the United States and around the world as they celebrate Vesak, a day honoring the birth, enlightenment, and passing of the Buddha. The ceremonial lighting of a lamp, the symbol of this holiday that has been celebrated for over 2,500 years, reminds us of Buddhism’s teachings of compassion, humility, and selflessness that endure today. On this day, we also commemorate the many contributions of Buddhists in America who enrich our communities and our country as we all work together toward brighter days ahead.”

The White House has celebrated Vesak for the first time ever with the Second Gentleman, Mr. Douglas Emhoff, lighting a candle in the White House in the presence of three Venerables representing Theravada, Mahayana, and Vajrayana traditions. This is also the first time for all of them to come together under #peaceloveunity. 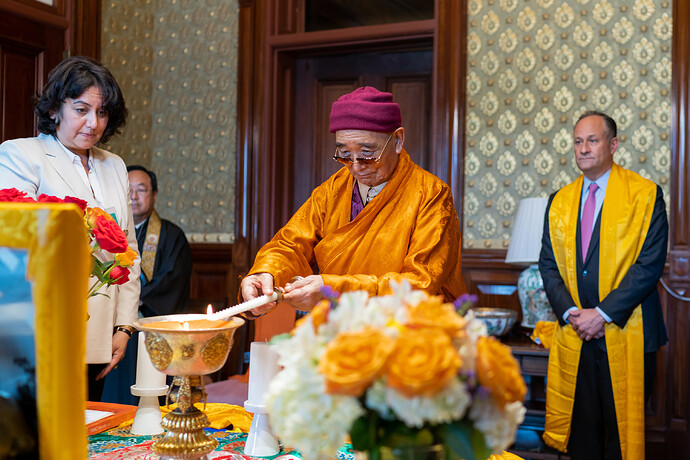 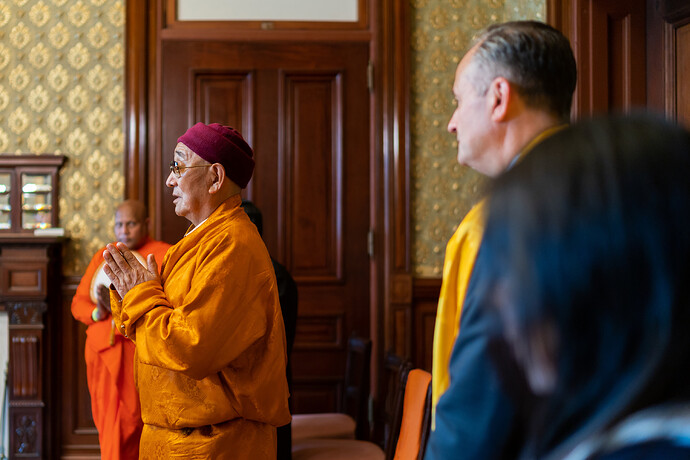 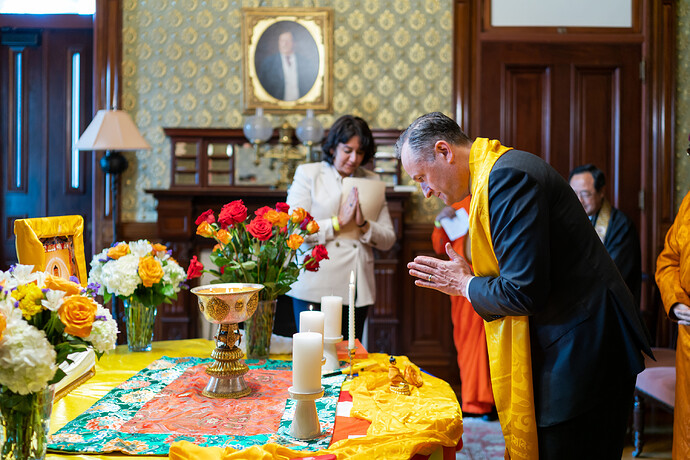 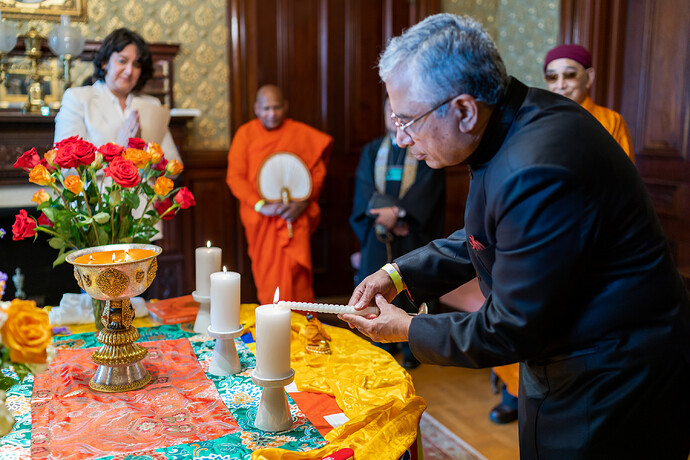 Wow, they even made an effort to represent the three major divisions of Buddhism.

Beautiful, these symbols are important and meaningful. We need to be seen.

these symbols are important and meaningful. We need to be seen.

Yeah! With anti-Asian American hate crimes on the rise, now more than ever. “Not by hate is hate stopped…”

I remember when Obama became the first president to release a Vesak message from the White House: as a Buddhist American it was surprisingly emotional for me. Not something I even thought I cared about until it happened. Only then did I realize how meaningful it is.

Kudos to the Biden and Harris families for expanding on what the Obamas started and for actually hosting the ceremony. May the Triple Gem bless their big, white house, their big, multicultural country, and our big, fragile planet.

Curiously, or perhaps not too curiously, there is not much coverage of this in the U.S. news media. A quick Google search turns up virtually no stories on the websites of major newspapers, wire services, or cable news channels (not even the website for National Public Radio, which receives funding from the U.S. government). The New York Times, which styles itself as “the newspaper of record,” often runs short pieces (a small paragraph in its Daily Briefing section) reporting on White House commemorations of other religious holidays such as Easter, Ramadan, Eid al-Fitr, and Passover has not made a single mention of the White House Vesak statement.

Normally news coverage of White House statements commemorating religious holidays amounts to short puff pieces. So it’s not as if these events are headline news. It just seems odd that the Vesak event has generated essentially zero interest in the news media.

The news cycles this week seemed to be dominated by the 1 year anniversary of the George Floyd murder, and listening to NPR yesterday the entire programming seemed focused on this issue, so it may be that the Statement by President Biden on Vesak | The White House was drowned out a bit by other news. Pres. Biden’s focus on “Buddhism’s teachings of compassion, humility, and selflessness that endure today” might make the Dhamma the most profound and important path for humans, but not nearly as newsworthy as the pots that stir within the Abrahamic religions in the US. Plus, Buddhism doesn’t have a heavily monied PAC (the way that the Abrahamic religions do in the US) , and so I nominate the idea to start a PAC, and fund it and use it to support politicians and political issues. Then, we might get some news coverage. (previous sentences all meant in humor) Otherwise, we will just be relegated to the position as the religion of renunciation, wisdom, compassion, and peace, practices that seem to be anathema in the world at the moment.

On a much (much) smaller scale, I posted a message yesterday on my workplace’s internal communication app, pointing out that it was Vesak, together with a brief explanation of its significance.
I was hugely heartened when my boss responded with a lovely ‘Happy Vesak’ image of the Buddha, and many colleagues added heart and praying hands emojis, as well as ‘Happy Birthday to the Buddha’ wishes.
I think it was the first time Vesak was recognised by my place of employment.

One of my coworkers is from Bangladesh, and he mentioned that it was Vesak yesterday during a coffee break. I was surprised he mentioned it. He is Muslim, but he said they celebrate the holidays off all the religions in Bangladesh - Buddhist, Muslim, Hindu, and Christian. And everyone gets days off for every holiday. Maybe that’s the way to create harmony among different religions: everyone celebrates all the religions!

Thank you so much for this, @Vimala.

The Sri Lankan monk in the background (holding a fan) is Bhante Uparatana of the International Buddhist Center near Washington DC. He is one of the sweetest people whom I know; as a student of my teacher Bhante G, he was a regular visitor to my home monastery, and is like a beloved Uncle to me. I’m glad he had the honor of lighting a candle to represent us. 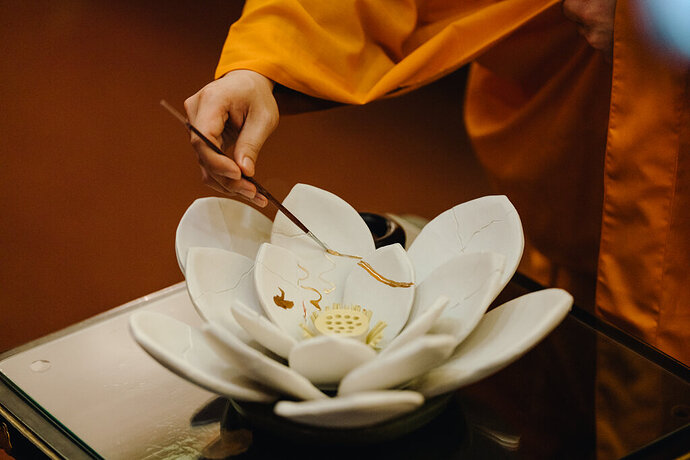 Repairing Generations of Trauma, One Lotus Flower at a Time

The lotus flower, blooming out of muddy waters, has long been a symbol of rising above suffering. In the wake of Anti-Asian attacks, spiritual leaders hope it can help heal the trauma of racial violence in the U.S.

I nominate the idea to start a PAC, and fund it and use it to support politicians and political issues

You joke, but in the US as in Australia, Buddhism is massively under-institutionalized. We need much stronger representative bodies to make sure the Buddhist voice is heard.

It just happened this week, for example, that our state government held a photo opportunity for religious leaders in support of people getting vaccinated. Ven Akaliko and I were happy to attend. It’s a good initiative, because it helps to get the message to people who may not normally watch mainstream sources. But at the last minute they changed the day to Vesak. We were like, “Umm, you realize this is literally the holiest day in the Buddhist calendar?” But they wouldn’t change it. Obviously there’s no way they would have done it on Christmas.

To be clear, the relevant department has generally been good, and our contact there is a Buddhist herself. It’s a small thing, but it just shows the extent to which our values can be overlooked.

I think it was the first time Vesak was recognised by my place of employment.

Nice! That’s a really good idea, I’ll suggest it to our Buddhist Councils for next year.

he said they celebrate the holidays off all the religions in Bangladesh - Buddhist, Muslim, Hindu, and Christian. And everyone gets days off for every holiday.

So nice! There is of course a strong traditional Buddhist community in Bangladesh.

They do the same thing in Malaysia.

Bhante Uparatana of the International Buddhist Center near Washington DC. He is one of the sweetest people whom I know; as a student of my teacher Bhante G,

Oh, I was wondering about this!

You joke, but in the US as in Australia, Buddhism is massively under-institutionalized. We need much stronger representative bodies to make sure the Buddhist voice is heard.

I was joking, but we all know behind many joking attempts there’s a grain of truth to it. Some years ago I actually researched the idea of starting a PAC, so that at least Buddhist ideals might be represented and that there might even be access to what was then “faith based initiative” funding in Washington, which largely went to Xtian groups. Maybe the time is ripe for a suggested way to strengthen Buddhism as an institution in the US and AUS, and other countries. With the Biden administration, there will be focus on climate change issues, antiviolence campaigns, mental health, and other issues that might be amenable to the influence of informed and organized Buddhists, particularly from those that do not have any personal or pecuniary “skin in the game.” In other words, the PAC would be run by Buddhists of good faith, who participate with strong ethics and who act only to be of service to reinforcing Buddhist values in government, politics and public policy.

What is a PAC please?

I think it’s an American acronym and not used elsewhere. It helps our global readership if these things can be explained on first use.