On September 19th Russian Federal Supervision Agency for Information Technologies and Communications (ROSKOMNADZOR) issued to the administration of the website Theravada.ru a warning about nationwide block of access to the site unless they remove the text of Godhika Sutta (SN 4.23), available at
Годхика сутта: Годхика :: Саньютта Никая 4.23

which according to the agency contains propaganda of suicide.

As a decription of the violating piece of information the state censor agency provided in its letter they cite (in Russian) the following portion of the sutta:

After the news reached the media they on September 23d issued a corrective statement claiming that it’s not the sutta text which had been identified as violating, but the commentary of the editors. The cited portion of the sutta was indeed commented in the footnotes. Only that the said commentary was nothing else than a quotation from Atthakatha.

The entire sutta with the footnotes is a translation into Russian of its English translation by Ven Nanamoli/Ven Bodhi.

Thus as violating has been deemed a note #309

Since the warning had been reformulated rather than withdrawn, the site administration still had to comply to avoid site lockout in Russia and so removed the Atthakatha quotation from the footnotes. 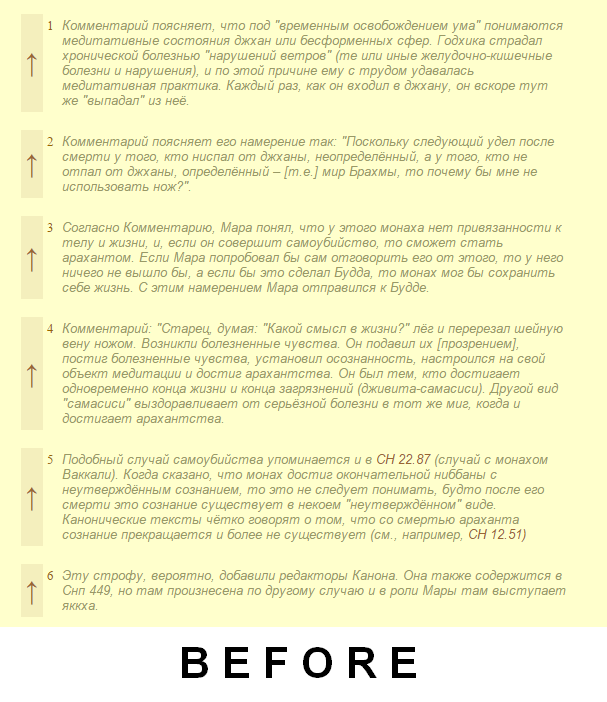 In the WHO 2012 world suicide rating Russia was placed 14th . Only two predominantly Buddhist countries were placed higher in the rating, namely Sri Lanka and Nepal.

Wow, this is incredible, thanks so much. It brings up a whole bunch of issues!

Firstly, do you have any recourse? The idea of censoring an ancient scripture online like this is just bizarre, surely there must be an appeal? We’d be happy to offer any support or endorsement from this end if it would help. It sets up a terrible precedent, and we should oppose any attempt to censor Buddhist texts.

If this was Australia, I would immediately contact the relevant Minister. In this case, the Minister has tweeted reservations about the Bill, so he may be sympathetic.

For the record, the translation of the footnote you give in English is, in fact, directly from the commentary to SN 4.23:

The Google translate version of the comment on the Russian govt. site is this:

According to the decision of Rospotrebnadzor of 19 September 2015, declared illegal information posted on the Buddhist religious site Theravada.ru. In particular, the editorial comments on the religious texts (Sutta) Buddhism is a detailed description of the method of suicide, and expressed appreciation and endorsement of suicide.

If the translation is accurate, then the accusation is clearly wrong: there is nothing in the text or commentary that either gives a detailed description of suicide or that endorses it.

In responding to the govt. department I think it is important to emphasize that Buddhist or Buddhist-inspired meditation can be helpful in both preventing suicide and in helping the loved ones. The causes of suicide are many, but ancient Buddhist texts are not one of them. A leading contributer to suicide in Russia is alcoholism, and it should be pointed out that the suttas are steadfastly opposed to drinking alcohol.

Firstly, do you have any recourse? The idea of censoring an ancient scripture online like this is just bizarre, surely there must be an appeal?

definitely formally there is appeal procedure, but the people running the site seem to have expressed no intention to utilize it

maybe that’s a correct dhammic attitude, having no desire to fight the world back, seeking no restitution when wronged, Russian reality provides a furtile ground for its development, because efforts of fighting back are usually futile anyway

I understand their reluctance! It is a shame though, since such censorship sets a bad precedent. The sad reality is that reading Buddhist texts is a highly dangerous activity in many parts of the world. It might seem unlikely that anyone will follow the Russian govt’s lead here, but there are plenty of countries whose internet policies are no better informed than this.

Yes, it seems the Russian authorities are really missing the point.

they don’t give a damn about the point, they do stats

Apparently this is being challenged in the Russian courts:
http://dhammawheel.com/viewtopic.php?p=365562#p365562

Court, we lose. Judge Maria Moskalenko not satisfy our claim to Rospotrebnadzor. Motives solutions do not yet know, the judgment itself is not yet ready.

At the meeting, the representative of Rospotrebnadzor said, her agency is not required to acquaint us with the expertise, on the basis of which the first was the prohibition Buddhist Sutta Godhika, and when the public is outraged - the decision have changed. Sutta again allowed, but forbidden to comment it.

In a hurry and with flaws is all taken, says an example. Rospotrebnadzor said that the commentary to the Sutta, posted on the website of the St. Petersburg Buddhist community, is editorial. In other words, it produced one of the members of the community. In fact, this comment appeared in the 5th century, the author - one of the most revered monks of Southeast Asia Buddhagosha.

Despite the loss, in a meeting to confirm our fears. As such examination, vindication of which we are seeking, at the disposal of Roskomnadzor is not there. We do not attract experts with knowledge in the field of religion, Buddhism. The decision to ban made on the basis of internal beliefs Rospotrebnadzor officials. This court has openly declared the representative of the supervisory authority.

What is belief, and most importantly - can be considered official experts, in today’s meeting, alas, could not figure out.

We hope that it will be able to appeal.

Yes, basically it turns out they banned the commentary because they thought it was made by a community member and sounded kinda wrong. They didn’t even bother to have the comment examined by an expert, mostly , even though it’s just my hunch, because they didn’t really know who the Theravada Buddhists are and regarded by them as some weird cult like Scientologists or something. Now, when the story went public, they just don’t want to lose face and admit they messed up. More importantly, they don’t really care what ‘these weird cultists’ think and feel. I should note I don’t mean it disparagingly, it is just a statement of the facts the way they are in Russia.

Thank you both so much for informing us. It is a sad day. Of course, one minor passage is not so important, but it establishes a troubling precedent. Who knows what could be next?

If there is anything we can do to help, please let us know. In any case, you know that you have all our support.