Hearing the Nuns on How Their Texts are Lived

This post was originally from the wonderful topic started by @Vimala but in the interests of keeping that thread in line with the intentions of the OP, I have moved this comment here.

So I am making a guess and assuming that these texts have only started to be “lived” in the last twenty years or so… Prior to that they were “gathering dust on a shelf” as it were…? At least in the Theravada tradition?

I suggest that they were initially formulated primarily as “lived” texts. That is they weren’t created out of thin air. They were not created in a vacuum. And they were created for living breathing women to make use of them and live well and happily with them.

They may have been added to here and there…corrupted and turned into an intellectual relic. They weren’t intended to be such a relic.

In doing this, I would suggest, without wanting to hinder anyone’s contribution here, that it is those who are currently living these texts that we should be hearing from the most.

Further, with regard to how a woman’s body works, how her sexuality might play out in relation to her biology and how her mind might interact with this…well…I think again…we should take care, extra care, to attempt to redress the common historical tragedy of humanity and to avoid re-creating it here; that is we have to be careful that we do encourage women to record their experiences, and that we do acknowledge these voices and experiences as being, in some particular respects unique.

I am not, in any way suggesting anyone is discouraging in an opposite way to this… And I do very humbly apologise if any offense is caused.

Indeed, I feel everyone here is genuine in their concern and desire to address these issues and support the nuns to find their way to once again understanding their texts, moving towards a more useful removal of them from the shelves of academia to lived experience. But I am, perhaps pre-emptively, suggesting that we take an extra care here.

I would like to hear their voices more clearly now. I don’t want the voices of those attempting to find their way to living these texts in honesty, to be drowned out.

I say all this with deepest respect for all of you and your clearly, beautifully, well intentioned responses.

But I do call on the nuns out there, the bhikkhunis, the women studying and practising or training in this or interested in this and other related issues, to take a more active role in discussions/sharings such as these; really for all our sakes.

With much metta and anjali to all

Just to note, I think it’s problematic to rely on the Vinaya as the primary source for how the nuns are to live. It is filtered through a patriarchal lens, and offers a very partial and sometimes distorted view. I think the Therīgāthā offers a much better, more honest, and more reliable view of the life of the nuns, as told in their own words.

Thanks for your reply Bhante.

I think it’s problematic to rely on the Vinaya as the primary source for how the nuns are to live. It is filtered through a patriarchal lens, and offers a very partial and sometimes distorted view.

This is one of my main reasons for wanting to know how actual real, life nuns are relating to their texts. I feel it is a starting point, at least, for redressing some of the inherited imbalances and inaccuracies.

It seems from what a few have said elsewhere, that even amongst/between current Bhikkhuni communities, there are differences in interpretation and possibly some of this is based in differences in understanding of how to approach the Dhamma too…(?)…

For me personally, this makes it tricky… I want to hear different voices and experiences, I want monastic women to feel safe enough to share…but I want to be able to respectfully and kindly then look at all the differences and say, “well, that makes sense to me and that doesn’t”… Which doesn’t mean anything except that I think these kinds of conversations themselves need to be the outcome right now.

And taking a step back from this as an outcome, even just having a space to share needs to be a goal.

So I suppose I see a series of possible aims:

…leading in an organic sort of way too…

Ideally, I would see, perhaps in a few years, such conversations, eventually leading to:

Having said all this, and being acutely and ironically, aware of my non-monastic status and your non-nun status, I still want to say that comments like this from monks such as yourself:

Can a Bhikkhunī break Pārājika 1?

In Bhikkhuni Vinaya Studies I argued that the existing texts, especially of the Pali and Lokuttaravada Vinayas, point to an earlier Vinaya tradition among the nuns, which lacked some of the patriarchal features of the developed Vinayas. Notably, that ordination was originally by nuns only. I believe this is well established, but of course it only applies to a limited scope. There are many more areas needing such analysis.

…are just plain helpful. Thank you.

I think the Therīgāthā offers a much better, more honest, and more reliable view of the life of the nuns, as told in their own words.

Is this the earliest text on Bhikkhunis that we have available to us?

Well, it’s the earliest substantive text that is entirely in the nuns’ words.

I am looking forward to reading your translation.

Let me add a little more of a modern-day perspective.
This is how Ayya @vimalanyani and myself have lived in the last 6 months in Belgium. Our monastery is not yet ready so we had to make due with a tent, treehouse and compost toilet in our sponsor’s back yard.

The compost toilet consisted of nothing more than a bucket with sawdust, so had to be emptied regularly. So there is actually a rule for that in the Vinaya:

Should any bhikkhuni toss or get someone else to toss excrement or urine or trash or leftovers over a wall or a fence, it is to be confessed.

The story behind this rule is worth reading:
https://suttacentral.net/en/pi-tv-bi-vb-pc8

And this was SuttaCentral & Samita HQ in our sponsor’s house:

Not many nuns seem to give any reflections on their life here. So here’s a picture that was taken yesterday: we took the monastery’s 20-year old Landcruiser out onto an off-road trip in the desert and after a short hike we came to an old valley that had been the home of a native American tribe some 2000 years ago. It had a wonderful calm and spiritual atmosphere and hundreds of petroglyphs carved in rocks. A lovely place to meditate! 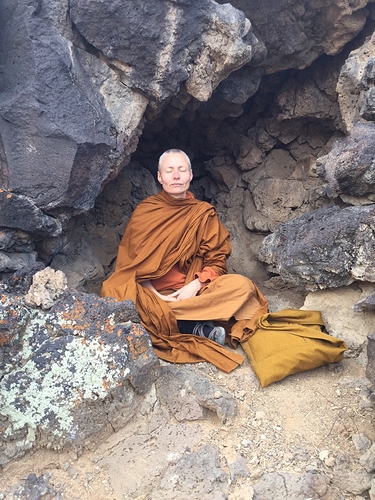 (But most days are spent with a combination of meditation in the Monastery and SuttaCentral work behind the computer, so much less exciting!)

I guess this brings me to another rule:

Should any bhikkhuni, not being ill, ride in a vehicle, it is to be confessed.

As you probably see monks and nuns ride around in cars a lot, you might wonder what this rule is about. Of course life nowadays is much different than India in the time of the Buddha. In any case, they did not have cars and other vehicles where not so widely used either. Nowadays, without cars or public transport, we would not be able to get anywhere. So the Buddha also gave the possibility to adapt rules to time and place.

For cars, most monasteries do not allow monks and nuns to drive the car themselves, but some allow cars to be used on non-public roads like the monastery’s private land. Luxury cars are of course better avoided altogether.

I think we are very fortunate to have many supporters of the nuns and progressive nuns on this forum. I am not sure we have voices at the other end of the spectrum on here. Maybe I’m wrong.

Some nuns seem to be ok with secondary to monks. Maybe they just want to get on with their practice. In which case they’re probably not on SCDD.

Even across Australia I can tell you that different Bhikkhuni/nuns communities live their training very differently.

I think it’s also useful to hear from the monks. We forgot that the monks also have to chose to accept these rules or not.

I haven’t read it, but this book may possibly include some relevant stories. Here’s a review:

Throughout Buddhism’s history, women have been hindered in their efforts to actualize the fullness of their spiritual lives; they face more obstacles to reaching full ordination, have fewer opportunities to cultivate advanced practice, and receive diminished recognition for their spiritual accomplishments.

Here, a diverse array of scholars, activists, and practitioners explore how women have always managed to sustain a vital place for themselves within the tradition and continue to bring about change in the forms, practices, and institutions of Buddhism. In essays ranging from the scholarly to the personal, Women’s Buddhism, Buddhism’s Women describes how women have significantly shaped Buddhism to meet their own needs and the demands of contemporary life.