Hey American Buddhists: time to get the Dhammapada in the Capitol

A new member of Congress is swearing in on an old Superman comic, because apparently nothing matters. But the “standard” books have expanded to include a variety of sacred texts. 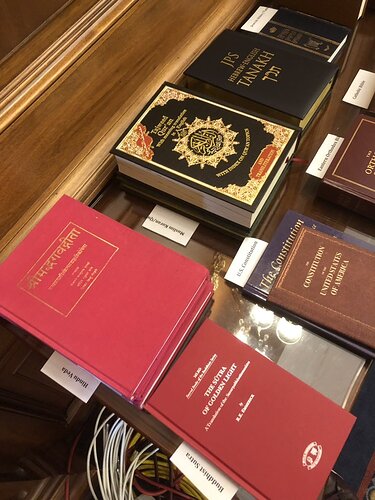 768×1024 131 KB
For “Buddhist sutra” they have “The Sutra of Golden Light” (Suvarṇaprabhāsottamasūtrendrarājaḥ), a Mahayana sutra that is especially popular in East Asia. This serves well as a sacred text for mahayana Buddhists, but since it is not an EBT it doesn’t include all schools, including Theravada.

In 2009 we added a Buddhist text to the Speaker’s box in Canberra. I advocated for the Dhammapada.

The Dhammapada is one of the ancient texts, spoken, as far as we can tell, largely by the historical Buddha, and organized and edited by the Sangha of old. We cannot know, of course, that all of the verses were spoken as we have them by the Buddha himself, and indeed several of them share things in common with Jain or Brahmanical verses. Nevertheless, as a historical scholar I feel that the teachings found there are very likely to represent the actual teachings of Siddhattha.

The Dhammapada is not a sectarian document. It is true that the best-known version, which I have proposed for inclusion, stems from the Theravada school, but this is just an accident of history. This particular version happened to have been passed down through the Sri Lankan lineage. But many other versions have come down to us.

There are no significant doctrinal differences between these versions. They merely choose slightly different readings, some different verses, and change the order. It would be a nice gesture to non-sectarianism to include one of these texts as well as or instead of the Pali, but I am not aware of any suitable translations.

The teachings found in the Dhammapada are those common to all schools. They are particularly relevant for lay instruction, and are frequently used in that way in Buddhist communities. But perhaps even more significant, the Dhammapadas are often associated by scholars with “Ashokan Buddhism”. That is to say, that the emphasis on a practical application of Dhamma to a good life as found in the Dhammapada, and especially the emphasis on non-violence, relates very closely to the teachings found in the Ashokan edicts. This means that they are particularly suitable for a leader who seeks moral and spiritual guidance in the practicalities of life.

Can we imagine, what would a politician do if she happened, on a difficult night in Parliament, to seek some solace from the religious texts found there? She opens the box, is delighted to see a Buddhist text, and, having heard that Buddhism is a rational religion of ethics and meditation, opens a random page. What does she find?

We should have a copy of the Dhammapada, as a universally beloved and canonical text, in the US Congress and Senate to serve all Buddhists regardless of their sectarian affiliation.

Over to you, Buddhists of the USA!

Different swearing in ceremonies have different requirements. In this case, despite the click-bait title of the article that got me yesterday, the new congressman was sworn in on a Constitution, underneath which were three personal items: a comic book, a photo of his deceased parents, and his citizenship certificate.

In the House procedure, there’s no requirement for a book, so members-elect are governed by tradition when selecting items. AFAIK the Dhammapada would be allowed, should someone ask for it.

ETA: It’s being covered in a clickbaity way, but he was sworn in on a Constitution, under which was the comic book, according to his own Twitter account:

Former Long Beach Mayor Robert Garcia, who was sworn in as one of the newest members of the U.S. House of Representatives, had a few special items with him at his ceremony Tuesday.

“Will be proudly sworn-in to Congress on the U.S. Constitution. Underneath the Constitution will be 3 items that mean a lot to me personally. A photo of my parents who I lost to covid, my citizenship certificate & an original Superman #1 from the @librarycongress,” the self-described “comic book nerd” tweeted on Tuesday.

From MSN.com, you can find the article via news.google.com

U.S. Rep.-elect Robert Garcia was to be sworn into Congress on Tuesday where he said he would promise allegiance to the Constitution not on a Bible, but on a copy of the founding document and a rare “Superman” comic book.

The incoming California Democrat, who previously served as the mayor of Long Beach, will also have a photo of his late parents and his citizenship certificate for his swearing into the House of Representatives.

I would choose a copy of the Dhammacakkappavattana Sutta and a copy of the Constitution for myself. I’m sure the texts of choice be will provided upon request from an incoming Theravada Buddhist Congressperson.

Will get right on it, Bhante.
Would it be ok for me to contact my Congressional reps using portions of what you wrote in your post, (with attribution to you, of course)?

Will get right on it, Bhante.
Would it be ok for me to contact my Congressional reps using portions of what you wrote in your post, (with attribution to you, of course)?

That’d be a great start. The thing with politics, you have to begin by getting it on their radar. Everyone is yelling at them all the time, so you have to start with something.

I’m sure the texts of choice will provided upon request from an incoming Theravada Buddhist Congressperson.

Interesting point. In Oz, we raised it with the Speaker—which would be awkward at this exact moment!—and he cheerfully agreed to include it. It wasn’t really an issue at all, he saw it as a nice way to acknowledge the Buddhist community.

I wonder if there is a peak body representing Buddhism, or if not, then some larger people/organizations who might take it up?

Interesting point. In Oz, we raised it with the Speaker—which would be awkward at this exact moment!

But very Buddhist. No speaker, no self.

U.S. Rep.-elect Robert Garcia was to be sworn into Congress on Tuesday where he said he would promise allegiance to the Constitution not on a Bible, but on a copy of the founding document and a rare “Superman” comic book.

That must be a seriously sacred oath to him…

you have to begin by getting it on their radar.

Actually, well known teachers in the US would have the most sway, including their ability to enlist the help of their many students if they believe it’s appropriate to do so. But they’re hard to contact unless one is a prominent member of their Sangha or is a well known/respected teacher.