How do brahmins find a wife by the pouring of water?

How do brahmins find wives by the pouring of water? Does anybody know what this Brahmin custom is about?

This appears in the Vessantara Jataka too, where Vessantara gave away his prized elephant, his children, and his wife. I believe the pouring of water over the hands is a symbol of giving away something that cannot be carried in the hands. In this sutta, it may mean that the woman’s family has approved of the marriage and has willingly given her in marriage.

Could the pouring of water also mean that the giver cleans the hands of the recipient so that they are worthy to receive the special gift?

Not by buying or selling, he only accepts a brahmin woman by the pouring of water.

There are eight types of marriage and the two most legitimate involve the hand-receiving ceremony (Kanyadaan) and pouring of water which symbolizes transfer of fertility from mother to bride and that the bride’s family approves the marriage.

Eight different types of Vivaah have been documented in the ancient Indian scripture Manu Smrti III.20-34. In all these types of marriage, an eligible groom is one who has completed his Brahmacharya Ashram (student hood) and an eligible bride is a never-married virgin who has recently attained puberty. The eight types of marriage are:

After the Varmala ceremony, the Kanyadaan ritual takes place. Kanyadaan, meaning “giving away the bride” in Sanskrit, is a symbolic marriage ritual for the Bride’s parents and the couple. The Father of the Bride take’s his daughters right hand and places it in the Groom’s right hand, requesting for him to accept his daughter as his equal partner. This ritual signifies both the acceptance of the Bride’s Father and his official approval to give his daughter away.

After joining the two hands, ‘Hastamelap’, the Mother of the Bride pours sacred water on to the palm of her husband’s hands, allowing it to flow through his fingers onto his daughters hand and ultimately to the groom’s hand as well. Rituals are chanted during this process and the curtain between the couple is lowered once Kanyadaan has been observed.

The Ritual of Kanyadaan After the Varmala ceremony, the Kanyadaan ritual takes place. Kanyadaan, meaning “giving away the bride” in Sanskrit, is a symbolic marriage …

I can only click one post as “solution”, but I consider actually both your posts as solutions. They both contribute to making sense of this phrase for me. Many thanks to both of you!

And in Thailand until nowadays there is a water pouring element in marriage celebrations / weddings.

(…) "Before the water pouring can take place the couple must seat themselves at the traditional water pouring tables (ตั่งรดน้ำ [ Dtang Rot Naam ]), with the bride to the left of the grrom. They will each have a ceremonial headdress (มงคล [Mong Kol]) , made from one piece of cotton to signify the joining of the couple, placed upon their heads. The Mong Kol will have previously been blessed by the Buddhist monks earlier in the wedding.

The couple will be fully prepared for the water pouring to commence once they place both hands (palms together), overhanging the water pouring table and positioned above flowers that have been arranged in a water tray, to capture the water that runs off.

Each of the elder guests in turn will take the ceremonial water pouring conch shell (สังข์รดน้ำ [ Sang Rot Naam ]), which has been freshly filled with holy water from the Buddhist ceremony, and pour a trickle of water from the base of the thumb to the fingertips over first the groom’s and then the bride." (…)

I went through this with my wife who is Thai and remember how soaked my hands got!

I don’t understand why there is no interest in when this ritual comes from. As if Hindu rituals are automatically ancient, because their rituals, and rituals don’t change.

Instead, we should also ask if we can trace the water-pouring wedding (or wife-seeking) to a pre-Buddha time or not. If for example the oldest source would be Vasistha-Dharmasutra 1.30 (which is about 300-400 years after the Buddha) then this would be an indication for a late sutta. Certainly the question of ‘legitimacy’ would speak for a Dharmasutra perspective. My point is: more historical critical awareness!

Good point! Although this hasn’t been my initial question it is definitely something worth exploring. It seems like the term udakūpassaṭṭha doesn’t occur elsewhere in the suttas.

If you or anybody else could shed more light on where and when this ceremony originated that would of course be most interesting.

It’s almost certainly not a fixed term, not even a very clear one. Sanskrit upasṛj can also mean to connect, so udakūpassaṭṭha could mean water-pouring or water-connection. And since it’s not a technical term it can’t be properly located as a ritual. Water and libation pouring of some sort is part of countless rituals. As mentioned Vasistha-Dharmasutra 1.30 is a source and also a few Grhyasutras, and to draw a connection beyond that to older literature is certainly speculative.

Kanyadaan was not observed in Vedic times in accord with a social climate in which women could choose their husbands. From the Buddha’s time onwards attitudes began to look towards those of the Christian era, kanydaan then arose, and now with the passing of that era, is being abandoned again:

“As per several Vedic Scholars, kanyadaan was not mentioned in the Vedas which are believed to be the source of several Hindu traditions.

Rather, Vedas had given importance to the consent of a girl to her marriage. The concept of offering his daughter as a gift to the groom by her father was never mentioned.” —-Internet

Bride says no to Kanyadaan: 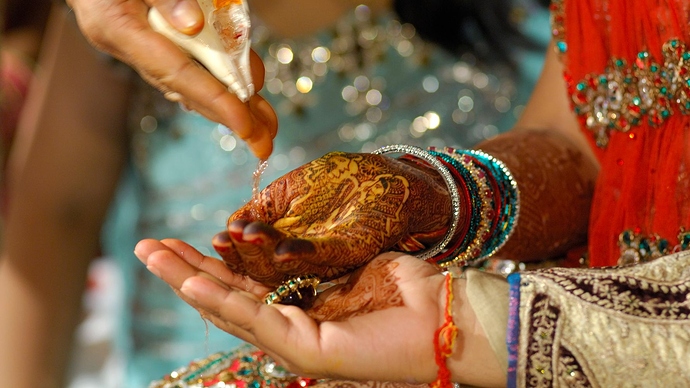 I Said No To Kanyadaan And All Hell Broke Loose

The notion that I will be given away by my father to my would-be husband is frankly cringe-worthy. My father has, without doubt, been one of the most...