How do monks who refrain from lying down hold themselves when sleeping?

I am curious how they keep themselves upright and stable, like against a wall or a post, or if they do not.

If they do not, do they keep their posture properly upright, or do they slouch?

If they do not, do they keep their posture properly upright, or do they slouch?

Maybe they get another monk to hold and keep them upright.

Maybe they get another monk to hold and keep them upright.

If they slept in shifts, it could work. Curious about the case when it’s only a single monk.

The day was very structured: four times a day I would sit and meditate in a traditional meditation box for three hours, and that’s where I slept, sitting up.
'I spent 12 years in a cave' | Life and style | The Guardian 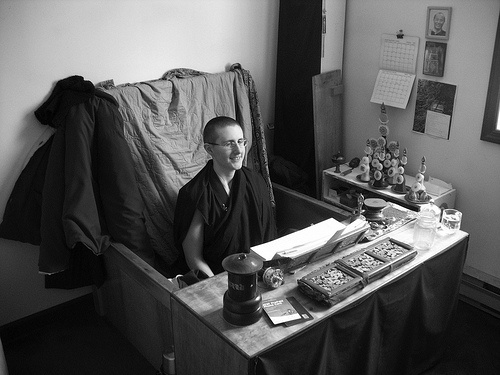 *picture is not Ven. Tenzin Palmo

Thanks for the article; I remember reading this one, long ago, but didn’t remember any details except the deportation.

I guess, to be clearer, the question I have is: What does sleeping sitting up entail? Does one lean back on something, or do they sit by the power of the body alone?

The photo you uploaded, @Cara, may suggest the leaning back idea; unless it’s being used purely as a place to hang the cloth.

I guess, to be clearer, the question I have is: What does sleeping sitting up entail? Does one lean back on something, or do they sit by the power of the body alone?

The Visuddhimagga describes three grades of strictness in the observance. The monks I’ve known who undertook this practice were all doing it in the milder second or third ways.

This has three grades too. Herein, one who is strict is not allowed a back-rest or cloth band or binding-strap [to prevent falling while asleep]. The medium one is allowed any one of these three. The mild one is allowed a back-rest, a cloth band, a binding-strap, a cushion, a “five-limb” and a “seven-limb.” A “five-limb” is [a chair] made with [four legs and] a support for the back. A “seven-limb” is one made with [four legs,] a support for the back and an [arm] support on each side.

And thank you for the source. I did not realize it was stated in the Visuddhimagga; I’ll have to refresh my memory of its contents.

I remember being told the Webu Sayadaw used “chin rests” with his students.

To become his student, one had to be able to not lie down for a month straight if I remember properly. There were no beds in the rooms, only “chin rests” where they could hold their chin while being asleep. This is from memory. Perhaps someone can fact check me on this.

Doesn’t seem that far fetched. Googling “sleep standing up” yields quite a bit of information, including sitting. Several types of animals can sleep not lying down, even moving. An example hit from that search:

How Restful is Sleeping in Your Seat?

Prohibited from throwing down tarps and sleeping bags in Zuccotti Park, some Occupy Wall Street protesters have taken to wearing Snuggies and sleeping ...

If a monks sleeps for just 4 hours or so (that “2nd watch of the night” thing from sutta-s?), the health risks (thrombosis, etc.) may not be that significant.

I myself found, after a couple years of sitting practice and samadhi development, that I could sleep, or at least nap, while sitting very erect and in physical equilibrium.

This was useful while attending all-day “continuing-education” classes that were boring, especially during that post-lunch period when digestion (parasympathetic nervous system) wants priority over the sympathetic NS (fight-or-flight type alertness). I would take a seat in the back-most row, get into a very stable, balanced, upright position, and doze-off for half-an-hour or more.

I suggest we research on whether and how the Jains take on that practice nowadays (or in the past).
This is for they’re one of the few Indian spiritual communities with practices possibly traceable as far back in the past as the Buddhist ones.
Has anyone heard of a vow or penance similar to this one being observed or pursued by our Jain equivalent?