How should we understand delusion?

The Victory Over Mara depicted in murals, where temptations are overcome: 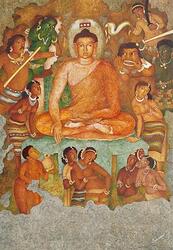 Once that happens it can’t be undone, even if one forgets the truth he has come to know.

Buddhism has a similar statement about the stage of stream entry:

[At Kapilavasthu ] Now at that time Sarakaani the Sakyan, who had died, was proclaimed by the Blessed One to be a Stream-Winner, not subject to rebirth in states of woe, assured of enlightenment."—Samyutta Nikaya 55.24

Thank you for sharing Paul, I appreciate it. I am not familiar with all the Buddhist terms but I am with the concepts, so this is helpful

Understood. An effort should be made to update belief systems since Buddhism is becoming increasingly relevant in the world, for example mindfulness in secular applications, where Analayo is at the forefront. More broadly it throws light on the positioning of China and India in today’s politics.

It’s interesting that the Buddha’s lifetime coincided with the Greek golden age, and some basic Buddhist principles like the middle way have parallels in Greek thought. Golden mean (philosophy) - Wikipedia

You may like to contribute from your knowledge to this: Is mātugāmasseta the 'feminine ideal'?

Thank you for sharing - I had a read, that is quite interesting.

I also appreciate the invitation! I had a look at the thread, but it was very unclear to me. However the feminine ideal is something I’m very familiar with in general

You mentioned ‘leviathan’ and the thread is based on that concept but from a Buddhist perspective. You might like to present the western perspective of ‘leviathan.’ If replies are in Buddhist terminology there’s no obligation to reply.

I understand delusion as:

It’s not seeing the three characteristics of anicca, anatta and dukkha in conditioned things.

Except the order is anicca, dukkha, anatta (Samyutta Nikaya 22.59).

The underlying pattern of the Buddha’s instruction in this discourse shows that insight into impermanence serves as an important foundation for realizing dukkha and anattã. The inner dynamic of this pattern proceeds from clear awareness of impermanence to a growing degree of disenchantment (which corresponds to dukkhasaññã),44 which in turn progressively reduces the “I”-making and“my”-making embedded in one’s mind (this being the equivalent to anattasaññã)."—Analayo