How to address a female​ monastic when talk or in a discussion forum?

What is the female equalant of Bhate?

Ayya is the female rendering for Ajahn.
I like Ajahn Brahm to Bhante Brahm.
Bhante Sujaro rhymes well.

Ayya is the female rendering for Ajahn.

Except not really, because ‘Ayya’ is in Pali and ‘Ajahn’ is in Thai. ‘Ayya’ also means ‘Lady’ whereas ‘Ajahn’ means something like ‘teacher.’

Anyways, I would ask the bhikkhunis and samaneris on this forum what they would like to be called.

As I understand it, the Thai approximation of Pali “ācārya” – a senior teacher.

[quote=“Brenna, post:4, topic:5655, full:true”]Anyways, I would ask the bhikkhunis and samaneris on this forum what they would like to be called.

Except not really, because ‘Ayya’ is in Pali and ‘Ajahn’ is in Thai. ‘Ayya’ also means ‘Lady’ whereas ‘Ajahn’ means something like ‘teacher.’

This is correct. There are also female Ajahn’s, for instance in Amaravati where Siladhara over 10 Vassa are called “Ajahn” also.

“Ayya” is the female form of “Bhante”.
And I’m fine with whatever you call me as long as it’s clear that you are addressing me

There are some differences of opinions as to who can be called “Ayya”. Some say that this term can only be used for fully ordained Bhikkhunis and I think the Sangha in the USA adheres to that. I myself also use it for Samaneri because “Bhante” is also used for novice monks (Samanera).

I think there’s a typo in the title. Do you mean, how to address a “feral” monk?

Just to note that in some Asian countries, they often use “brother” and “sister” (in English) as general terms for upasakas and upasikas, i.e. lay members of the community. So they don’t feel using “sister” is appropriate for nuns. I found this a surprise, because in Oz we always use “sister” to refer to Catholic nuns. But anyway, it’s good to know this local usage.

I think Ayya or Ven is fine.
But it’s really up to everyone what they feel comfortable with.

Sister seems very awkward to me, more Catholic than Buddhist. Monks are very rarely called brother (if at all), so I don’t quite know how sister came to be a form of address for nuns.

What is the female equalant of Bhante?

The lexical equivalent is bhadde, though the word seems to be encountered only in the Therīgāthā and Therī-apadāna:

As other posters have said, the normal equivalent in actual usage is ayye (the vocative of ayyā).

The lexical equivalent is bhadde

For nuns in India bhadde might well be a better term to use, given that in at least four major languages (Hindi, Marathi, Bengali and Tamil) ayya means a child’s nursemaid or nanny.

Agree.
I wanted to say this but I did not know for sure.
Now you confirmed it.

I wanted to say this but I did not know for sure.

Since my last post I have learned that the two ayyas, although homonymous, are in fact etymologically separate and unrelated lexemes.

The modern Indian āyā or ayyā (usually transliterated ayah) turns out to be a Portuguese loanword. As a result of contact between the different colonial powers in India it first found its way into Anglo-Indian English in the late 18th century and later into those native Indian languages that British colonial servants were most encouraged to learn. Its history is:

Other cognates are Spanish aya, Italian aja, and Tagalog yaya.

One of the earliest recorded occurrences in English is in an hilarious period piece entitled The East India Vade Mecum, or, Complete Guide to Gentlemen Intended for the Civil, Military or Naval Service of the Hon. East India Company (London, 1810). The author, Capt. Thomas Williams, seems not to have been very favourably impressed with them:

The female who attends a lady while she is dressing, &c., is called an ayah; pretty nearly corresponding with the ‘lady’s maid’ among us. The wages of this servant are by no means settled, but may be taken on average at from eight to twelve rupees monthly. Some are half-caste children; that is, of European fathers and native mothers: brought up in families from their infancy. To these, good treatment and kindness should form a valuable compensation for the smallness of wages; and induce some among them to remain for numbers of years, faithful and affectionate; but such are by no means numerous, when compared with the thousands who, at a certain age, either quit in search of places affording either higher play or handsome perquisites; or who, if handsome, engage as ‘house-keepers to single gentlemen.’

The majority of ayahs are of Portuguese extraction, being descended from those heroes who, in times of yore, ‘laid bleeding Asia prostrate at their feet;’ but who now compose the most contemptible race to be found on earth; affording to the natives ample scope for comparison between the modern, and the quondam European. Many Portuguese ayahs affect to be in possession of genealogies, whereby it should appear they are lineally descended from most illustrious characters; most of whom would, no doubt, be indeed abashed, could they now take a peep at their ill-fated and degenerate posterity. 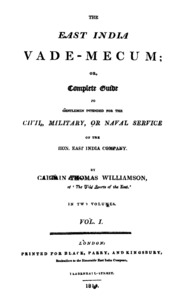