Humans? Or Human-like? Also, the Moon

I was reading DN14, and it’s such an interesting sutta. It’s cool to see the backlog of Buddhas, but I noticed their ages are pretty large until it gets to our Buddha. I wonder why that is, and I wonder if these other Buddhas were humans, or just beings with a similar situation as humans. Same basic intellect and awareness, and same basic struggles. It seems a little weird to me that as the universe expanded and contracted over and over again that it would be homo sapiens that evolved every single time. It must have been pretty cool though, to have a buddha alive for 80,000 years. That’s pretty intense. I also wonder though, if these numbers are just meant to signify compared lengths of time, not necessarily those exact amounts.

I also want to say, that if these are actually accurate, it’s pretty interesting, because it’s one of a few places in the suttas where the Buddha talks about the sun and the moon shining light, both seemingly as their own source. It kind of shows that even a Buddha, in some ways, still can only use his insane mental power through what he knows. He may have been able to see and directly experience the fundamental nature of reality, but there was still no way for him to know that the moon just reflects the light of the sun. Although, I wonder if that detail was just added later, and it wasn’t the Buddha that didn’t know, but just the ones writing this down. That makes total sense too. I assume most people go with the latter, but I’m interested to know.

I flagged time as something I’m lost on in the suttas. I was thinking of a few suttas in DN including DN14.

This response was from Bhante Sujato.

Why Secular Buddhism is Not True

Oh, sure. I mean, really, suttas like MN 27 are really blueprints for productive agnosticism. The only problem with agnosticism is when it becomes an excuse for laziness and not engaging in the pursuit of knowledge. This is one of my favorite bits! Long before Einstein, the Buddha was already talking about the relativity of time, how time flows differently in different contexts.

It’s not in the preview but it’s there

It doesn’t sound like they were particularly concerned about a distinct source of the light. Maybe there were more relevant causes to discuss:

“There are four sources of light in the world;
A fifth one is not found here.
The sun shines by day,
The moon glows at night,
And fire flares up here and there
Both by day and at night.
But the Buddha is the best of those that shine:
He is the light unsurpassed.”SN1.26

More interestingly DN14 talks of dark spaces which not even suns and stars cannot light up. Now why the Buddha didn’t think they were lights stuck on the dome of the sky is puzzling! It also seamlessly mixes up the material with the spiritual, very much like how ‘light’ was treated in the sutta above, which makes it tempting to dismiss the entire thing. DN has a lot of extraneous material (is that why the suttas are long??) but sometimes things do pop up which makes you sit up.

Even in those spaces which are between the worlds, baseless, murky and dark, and where even moon and sun, so wondrous and mighty, cannot prevail to give light, even there is manifest this infinite and splendid radiance, passing the glory of the gods. And those beings who happen to be existing there, perceiving each other by that radiance, say—“Verily there be other beings living here!”: And the ten thousand worlds of the universe tremble and shudder and quake. And this infinite and splendid radiance is made manifest in the world, passing the glory of the gods. DN14

Is Mt.Meru from an authentic EBT sutta, anyone? It can’t be accurate, short of it being an immaterial phenomenon.

I wonder why that is, and I wonder if these other Buddhas were humans, or just beings with a similar situation as humans. Same basic intellect and awareness, and same basic struggles. It seems a little weird to me that as the universe expanded and contracted over and over again that it would be homo sapiens that evolved every single time. It must have been pretty cool though, to have a buddha alive for 80,000 years. That’s pretty intense. I also wonder though, if these numbers are just meant to signify compared lengths of time, not necessarily those exact amounts.

Not exact amounts definitely. I suspect sometimes it just means ‘a very long time’ and longer than current life spans. We know from biology that our current cell based life form (albeit, plants) can live up to 80,000 years.

The oldest known plant (possibly oldest living thing) is a clonal Quaking Aspen (Populus tremuloides) tree colony in the Fishlake National Forest in Utah called Pando at about 80,000 years. Lichen, a symbiotic algae and fungal proto-plant, such as Rhizocarpon geographicum can live upwards of 10,000 years.https://en.m.wikipedia.org/wiki/Maximum_life_span

If however in a different/previous universe they were silicon based rather than carbon based, or simply the genetics allowed longer life spans (some jelly fish, hydra and flat worms are thought to be immortal) or it was something completely different to what we can expect or understand then these things may not be improbable, at least in terms of life spans. The universe must be evolving in a similar way that suffering and the cessation of suffering is possible. I wonder if an AI would ‘enhance’ the ‘lifespan’ of a future Buddha.

No no, AI will be the future buddha ;p

That dark space where not even the sun can get kinda sounds like a black hole.

That’s how I interpreted it

True. I thought they might be living in between the spaces of galaxies, considering how little light we get from stars when living in a galaxy. I suppose an immaterial life form could live in a black hole.

Do immaterial beings really live in a certain “place”?

Hah! Good point. I was thinking it would be difficult for material to mean much in a crushing black hole, which is why I said immaterial planes. But then Immaterial planes don’t perceive material (rupa) planes so seeing the light of suns won’t be possible. I’m sticking with vast intergalactic voids!

The red dot is the Milky Way: 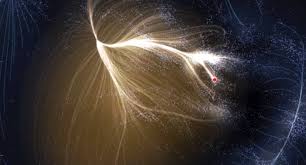 A bit more research and it turns out…

So-called tramp stars, flung from their galaxies in past gravitational interactions, could exist in great numbers outside the Milky Way Galaxy

Another interesting aspect of this is that if that previous buddha lived for 80,000 years, you’d think the teachings would be preserved until the extinction of that species. If our buddha arose right now instead of when he did, his teachings could be recorded perfectly and the originals could be kept until the end of the human race. You’d think that if that previous buddha was alive for around 80,000 years, the ability to record most likely would have been discovered in that time. That round of beings would have been pretty lucky, to have the exact verbatim of a buddha preserved.

Why do you think that the teachings could be recorded perfectly and kept until the end of the human race? They might last a really long time, but then again they might not - who knows what would happen. There is nothing (*not including nibbana, of course) that is not subject to impermanence.

Well the end of the species doesn’t mean eternity. Something can last 10 times longer than that and still be impermanent, it’s just a matter of it eventually ceasing to be. And only because you’d think some type of recording equipment or computer would exist after 80,000 years of a species, it was just an assumption though, and something interesting to think about.

It’s said that in this aeon there will be 5 Buddhas. Gotama Buddha is the fourth. We can already see how his teachings have deteriorated due to various reasons. However his influence has not entirely diminished. An interesting thing is that the teachings of the five aggregates seem known by people outside the dispensation during the Buddha’s time. Now these are very deep teachings and are difficult to logically understand. My theory is that remnants of Kassapa Buddha’s (3rd Buddha) teachings were prevalent in society at the time- of course I have no way to prove it. But to normally ferret out these components of one’s experience require vipassana, the signature teachings of a Sammasambuddha. Like finding a large footprints of an elephant it gives an indication that a profound teacher has passed this way.

As we can see even now, the words might change due to drifting of language but I think the meaning is more stable over time and might have been transmitted but the original teachings (possibly oral) lost. There is one interesting clue re some semblance of historicity - King Dharmashoka was supposed to have visited a stupa which belonged to Kassapa Buddha.

Yeah I agree, I think the Buddha actually says something like this in AN10.95, that no matter who or when they are, they reach awakening by abandoning the 5 hindrances, establishing mindfulness, and developing the 7 factors of awakening.

Correct. SN35.245 Kimsuka sutta has a similar similie. It has the swift pair of messengers coming into that city. Of all the factors to be developed that which is unique to Buddhism and the Buddha is the five aggregates and their understanding (i.e. Vipassana-Samatha). Overcoming hindrances, morality, jhana are all found in other religions then and now.

On the topic of the moon. SN46.96 seems to have the moon as its own light source too.

Just as, monks, of all starry bodies whatsoever the radiance does not equal one-sixteenth part of the radiance of the moon;

I don’t know - if you just look at the night sky the most obvious radiating thing is the moon. The fact that the light is a reflection of the sun’s rays doesn’t change that.