"if this exists, that exists" etc

I’ve often seen quotes that look something like this one taken from Wikipedia:

I have been trying to find a sutta that has that same pithy summary of dependent origination but I have so far failed. Rather, I have found the longer version which is an explication of the twelve nidānas. Does anyone know if the shortened version can be found in the suttas?

I have found SN12.23 useful. It enumerates vital conditions. There are twenty-two, twelve if we stop at suffering. It is one I study regularly. The sequence is subtle and not immediately intuitive.

BTW, we are currently collecting search terms for SuttaCentral Voice. The search term for SN12.23 is vital conditions. I have added this phrase but would gladly amend it if you have a better suggestion.

Other queries return a scattering of pertinent suttas (when this that arises ceases exists) that lack the useful detail of SN12.23.

One of the remarkable statements in SN12.23 is this:

That is how the sutta ends. Just like that. Suddenly.

thanks so much for your help. A number of the suttas found with your queries have the following formulation:

That is precisely what I’m looking for. I will now tell you why.

I am currently reading a book called “The Book of Why” by Judea Pearl. It is about causation and how it relates to science and, in particular, artificial intelligence. He quotes David Hume’s definition of casuality: “We may define a cause to be an object followed by another, and where all the objects, similar to the first, are followed by objects similar to the second. Or, in other words, where, if the first object had not been, the second never had existed.”

The similarity with the Buddha’s “When this exists, that is… When this doesn’t exist, that is not” is striking and I am thinking of bringing the similarity to Dr Pearl’s attention. Since he is an academic, I know it is important to show him an original text rather than a paraphrase of unknown origin, which is why I wanted to find the suttas with the simpler formulation rather than the twelve nidanas.

That Hume’s pronouncement is so similar is interesting enough in itself. But it is even more interesting in light of a journal article by Alison Gopnik that shows that it quite possible that Hume came into contact with Buddhist views during his time at the Royal College of La Flèche in France.

I’ve always been interested in Hume because his views match quite closely with the Madhyamaka view of “two truths”, the truth of the conventional (dependent origination as seen by one with right view) and the truth of the absolute (that any view about the absolute, such a “existence” and “non-existence” are not held by one with right view). I believe, as do others, that Madhyamaka has it roots in the Kaccanagotta Sutta. But that’s another story…

“Mendicants, I will teach you the origin and the ending of the four kinds of mindfulness meditation. Listen … And what is the origin of the body? The body originates from food. When food ceases, the body ends. Feelings originate from contact. When contact ceases, feelings end. The mind originates from name and form. When name and form cease, the mind ends. Principles originate from attention. When focus ends, principles end.”

I know that it is in Pāli. Eventually someone will find you that. It is a linguistic formula, if I remember right, to do with idappaccayatā in Pāli scriptures.

I wonder if 謂 is translating something like “iti”? That just came to mind. I wonder what Venerables @vimalanyani or @sujato might think of that notion. Or @wkhtfb, who I understand reads Chinese and might be of insight here. “Iti,” if I am not misinformed in presenting it this way, is a sort of “quotation mark” for oral literature. I am wondering of the Prākrit this Chinese was translated form might have had some kind of “iti” idiom for 謂, which shows up near-constantly in many SA texts. The presentation @Javier linked us to here, on the orality of Prākrit literature and it’s Sanskritization, had a section to-do with “iti” in the Pāli recension of buddhavacana.

Actually, I think I found the Pāli while writing this post. From SN12.37 Natumhasutta transl V Sujāto:

‘iti imasmiṃ sati idaṃ hoti, imassuppādā idaṃ uppajjati;
imasmiṃ asati idaṃ na hoti, imassa nirodhā idaṃ nirujjhati, yadidaṃ— avijjāpaccayā saṅkhārā; saṅkhārapaccayā viññāṇaṃ … pe … […]
‘When this exists, that is; due to the arising of this, that arises.
When this doesn’t exist, that is not; due to the cessation of this, that ceases. That is: Ignorance is a condition for choices. Choices are a condition for consciousness. … […]

There are many places in the suttas where this quote appears. Here’s another one:

I wonder if 謂 is translating something like “iti”?

I’m not really qualified to judge whether 謂 is generally used to replace ‘iti’. It would seem a bit odd, since iti is used at the end of a quote, and 謂 is used at the beginning. In the patimokkha texts, I came across an instance where it probably stands for “seyyathidaṃ” (“namely, as follows”), in Pali bu np 23 and the parallels.

I came across an instance where it probably stands for “seyyathidaṃ” (“namely, as follows”), in Pali bu np 23 and the parallels.

How can you tell this from the Pleco App?
The entry there just says “say, call, name, meaning,…” and a few other similar words. That could be a number of things in Pali, not just seyyathidaṃ.

Did you download a more specialized dictionary for Pleco?

This is the entry from the Digital Dictionary of Buddhism: 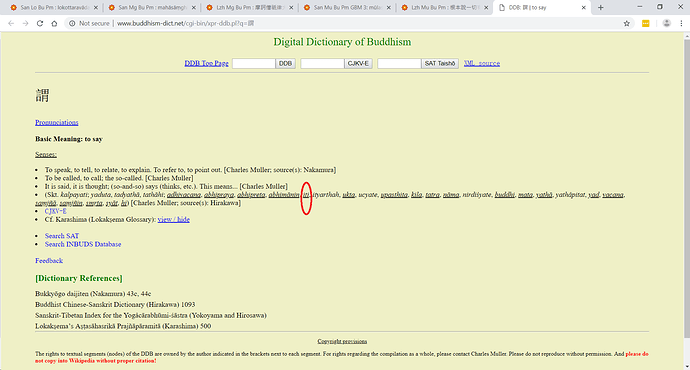 So “iti” is one of its meanings.

I’m going to look at other places it is very frequent.

I am thinking of bringing the similarity to Dr Pearl’s attention.

Ah! Thanks for the clarification. From Dr Pearl’s page, I see he is on the CS faculty of UCLA. I studied CS at UC Berkeley, and have dabbled in AI myself, which helps me appreciate your interest in Dr Pearl’s work.

At this point we are left with mixed feelings ranging from horror to wonder.

Best regards to Dr. Pearl and thank you for posting!

Thanks for all the helpful replies. I really appreciate it.

I have found SN12.23 useful. It enumerates vital conditions. There are twenty-two, twelve if we stop at suffering. It is one I study regularly. The sequence is subtle and not immediately intuitive.

For a good read on the topic look at Ajahn Brahmali’s essays on dependent origination and dependent liberation—the latter one is mainly analysing SN 12.23; the two essays complement each other.

Iti,” if I am not misinformed in presenting it this way, is a sort of “quotation mark” for oral literature.

Yes, this is the most common usage, but fundamentally it simply means “thus”. The use to indicate quotations is derived.

When used at the start of the phrase like this, it is similar in sense to seyyathīdaṁ. In this conext, we could translate it: “That is:” or “That is to say:”.

I personally have the heretical opinion that Hume’s understanding of causality is in agreement with the Buddha, and that ultimately it means there is no such thing as a “cause”; or rather, that there is no fundamental difference between cause and correlation. “Cause” is just a word we use for a correlation for which no exception has been found.

I disagree with the “two truths” thing, though!

that there is no fundamental difference between cause and correlation. “Cause” is just a word we use for a correlation for which no exception has been found.

This idea would not cut much ice in Epidemiology. You can have correlation with no causal relationship in science.

You can have correlation with no causal relationship in science.

But can you though?

Can’t a correlation be as little as “two things happened around the same time?”

Absolutely yes. Assuming a correlation means a relationship is causal is bad science.

So in epidemiology for example there may be a bunch of variables that you think may be correlated with an outcome but if you conduct multivariate backwards regression, some of these variables can be identified as non causal as they loose significance in a statistical sense as they are actually co-correlated with other contributing variables but this does not mean they are contributing to the outcome .