Ayya Kusuma passed away yesterday, at 92 years of age.

Bhikkhuni Kusuma, Ph.D. was a fully ordained bhikkhuni from Sri Lanka who pioneered the re-establishment the Theravada Female Buddhist Order in Sri Lanka, 1000 years after the Order died out. She took upon herself the task of carrying on the efforts of her mentor, Sister Ayya Khema , in establishing the Ayya Khema International Buddhist Mandir in Sri Lanka. She lived at Prajapati Meditation Centre, Batawala, Padukka, Sri Lanka.

Despite her age, she enthusiastically supported the Therigatha Festival a few months ago. She gave a beautiful talk about how the poems gave her inspiration to re-establish the Theravada bhikkhuni sangha. She had to face a lot of hardship and resistance, and was a true pioneer and inspiration for other women in the sangha. Now there are thousands of women in Sri Lanka and around the world who have followed her footsteps and taken full bhikkhuni ordination.
This might be one of her last public talks in English. Enjoy! Here are also some of her translations of the Therigatha verses.

May she attain nibbana.

Thank you for conveying the news Ayya.

May she attain Nibbana

I remember first reading about Ven Kusuma in a book about her experiences printed by the BPS.

But here is a video

Oh no! What a huge loss for the Sasana.

I remember meeting her at the Bhavana Society about 20 years ago. She gave a talk on the Chachakkasutta. I don’t remember anything about the talk itself but I do remember she said how happy she was to have the chance to speak to people who were really interested in deep Dhamma and so she picked that sutta. People don’t realize what a drag it is for monastics to be limited in what they teach based on who their audience is. We really had the chance to see her deep enthusiasm for the Dhamma.

May she attain Nibbana! May she rejoice in all the good actions that all of us on the forum are doing! May we all rejoice in the huge store of merit she collected in this life!

May she reach nibbana

Some of my memories/reflections of Ayya Kusuma.

Ayya Kusuma had visited the BSV some time before I came to Melbourne. While I never met her in person, I had the great joy of working with her over the course of researching Ranjani de Silva’s biography. With her helper Sohani’s able assistance, I had been in correspondence with her in the weeks prior to her passing away, before she became ill and was no longer able to correspond.

Ranjani de Silva had informed me that she passed away at young meditation teacher and nun Ven. Therika’s place. We were happy that she could have the support of nuns in her last days.

In her last months, she had been keen to emphasize to me her own personal determination to ordain, saying “Even at the cost of my life, I will do it.” These were important words to her.

Having spent the last three years putting together a coherent history of 1996 as it relates to Ranjani’s biography, there are certain things I appreciate now about Ayya Kusuma that hadn’t necessarily occurred to me so much earlier.

It hadn’t occurred to me, for example, that many of the gains for sila matas in Sri Lanka had occurred in Sri Lanka from the 1980s, including the formation of a sila mata association from 1986. I understand that Ayya Kusuma’s PhD with Professor Bloss, which had documented sila matas, contributed to documenting this community (which was unrecognised by the SL government for 50 years since 1932).

She had been involved with Sakyadhita International since its inception as the Buddhist Nuns’ Conference in 1987.

She was also a meditator, having stayed at the Daham Madura, one of the first residential meditation centres for lay women in Sri Lanka.

I have a beautiful photo of Ayya Kusuma (then Kusuma Devendra) kissing Ranjani while holding burat-hurulla (ceremonial betel leaf sheath…a gift for guests) at the 1993 Sakyadhita Conference in Sri Lanka. There is a feeling of joy in what they are accomplishing for nuns. 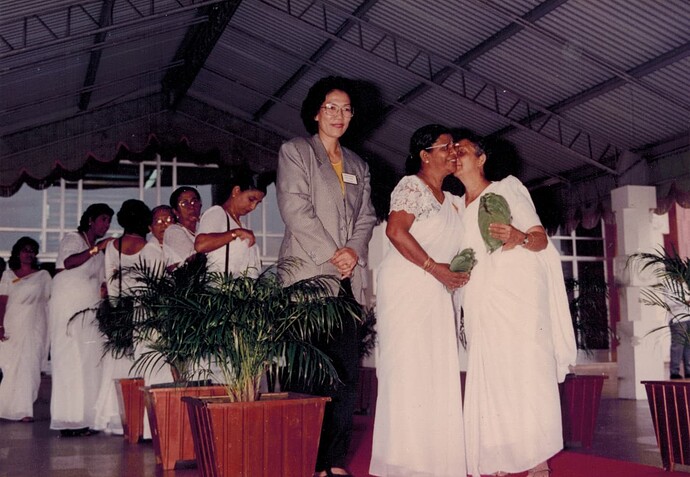 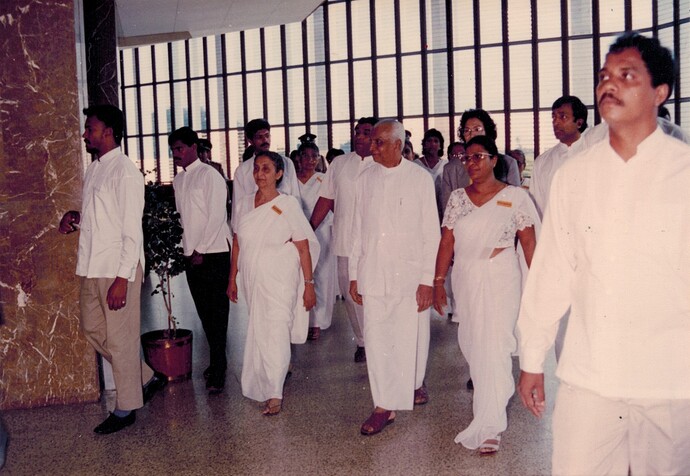 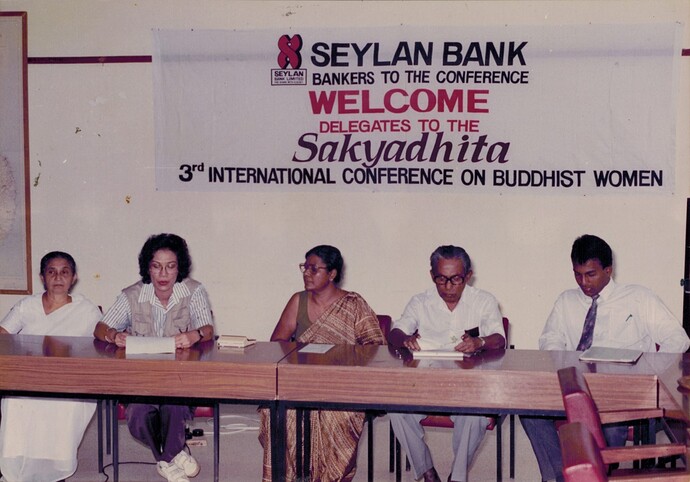 Ayya Kusuma was able to be a bold, fearless public face to lead the 1996 ordination group. She was articulate and educated, a confident public speaker, and has left us with a number of quality publications. In the context of issues affecting sila matas, like rurality and marginalisation, I can see why it was the educated, confident and vibrant Ayya Kusuma who was chosen to be up front. 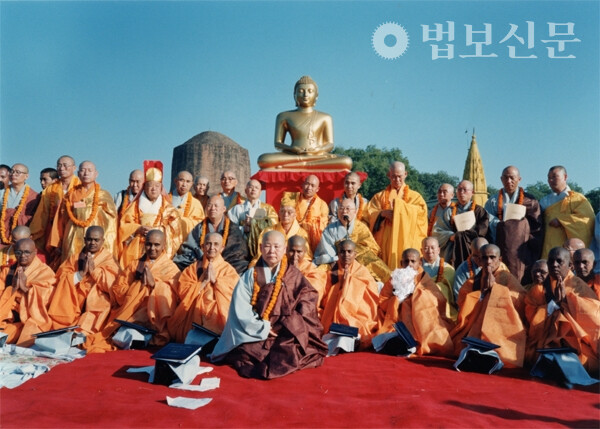 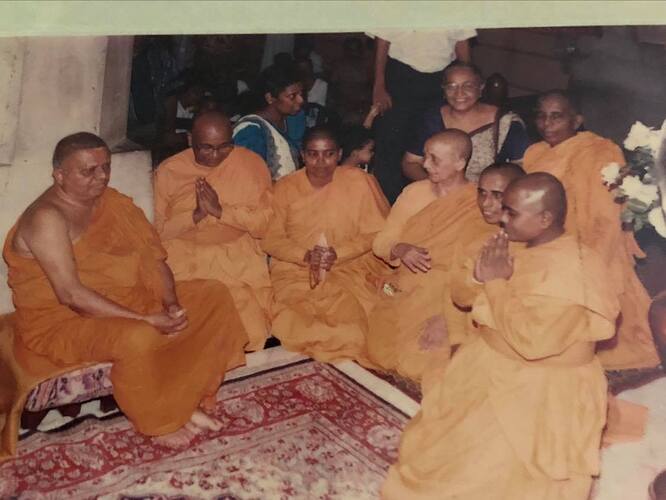 Some of her publications are listed below:

A Mental Therapy: The Development of the Four Foundations of Mindfulness or Sati Satipatthana in Theravada Buddhist Meditation (vipassana)
The Dasasil Nun, A Study of Women’s Buddhist Religious Movement in Sri Lanka
Code of Conduct for Buddhist Nuns (Bhikkhuni Vinaya) By: Bhikkhuni Kusuma
Braving the Unknown Summit (Ayya Kusuma’s biography)

I understand that her dhamma teaching work was personally important to her, so I had wished to highlight these.

These are just some personal reflections on someone who became more inspiring to me the more I got to know her.

May she obtain her heart’s wish.

Page on FB where folks are sharing photos 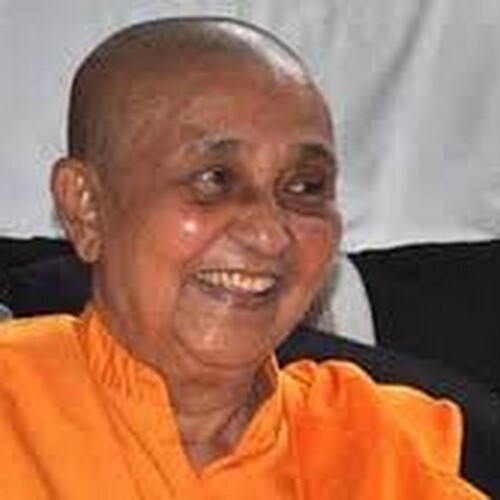 Venerable Bhikkhuni Kusuma (Ph.D.) 92 years of age, started her career as a science teacher in Sri Lanka. In 1969, she won a scholarship offered by National Science Foundation and Asia Foundation of USA to study for a MSc in Molecular Biology in the...

Sadhu sadhu sadhu for a most heartening and priceless recollection of most Venerable Bhikkhuni Mahatheri. Rejoice over her wholesome, selfless and meritorious deeds.