Info in Suttas on Metteyya Buddha

Do we have information on Metteya Buddha (presently in Tusita Heaven as Bodhisatta).

Please confirm, Metteya Buddha will attain bodhi (enlightenment) in 7 days, He will use high technology for discourse, the teachings will be same, The Four Noble Truths, N8P in relevant social order.
(From memory, unverified).

The opening post (OP) question is open-ended and broad , hence I am moving it to the discussion category.

In the four Nikayas, a future Buddha called Metteya is mentioned in DN26:

. The Arising of the Buddha Metteyya

And the Blessed One named Metteyya will arise in the world—perfected, a fully awakened Buddha, accomplished in knowledge and conduct, holy, knower of the world, supreme guide for those who wish to train, teacher of gods and humans, awakened, blessed—just as I have arisen today.
He will realize with his own insight this world—with its gods, Māras and Brahmās, this population with its ascetics and brahmins, gods and humans—and make it known to others, just as I do today. He will teach the Dhamma that’s good in the beginning, good in the middle, and good in the end, meaningful and well-phrased.
And he will reveal a spiritual practice that’s entirely full and pure, just as I do today.
He will look after a Saṅgha of many thousand mendicants, just as I look after a Saṅgha of many hundreds today.

Then King Saṅkha will have the sacrificial post that had been built by King Mahāpanāda raised up.
After staying there, he will give it away to ascetics and brahmins, paupers, vagrants, travelers, and beggars.
Then, having shaved off his hair and beard and dressed in ocher robes, he will go forth from the lay life to homelessness in the Buddha Metteyya’s presence.
Soon after going forth, living withdrawn, diligent, keen, and resolute, he will realize the supreme end of the spiritual path in this very life.
He will live having achieved with his own insight the goal for which gentlemen rightly go forth from the lay life to homelessness.

The relevant wiki is: 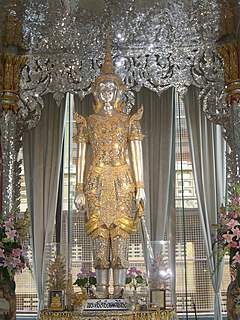 — Events — Maitreya (Sanskrit) or Metteyya (Pali) is regarded as a future Buddha of this world in Buddhist eschatology. In some Buddhist literature, such as the Amitabha Sutra and the Lotus Sutra, the being is referred to as Ajita. According to Buddhist tradition, Maitreya is a bodhisattva who will appear on Earth in the future, achieve complete enlightenment, and teach the pure dharma. According to scriptures, Maitreya will be a successor to the present Buddha, Gautama Buddha (also known as Śā...

In the four Nikayas, a future Buddha called Metteya is mentioned in DN26:

An interesting article on D&D on the topic is found here. It takes you on an astonishing journey through several other collections of the canon with relations to mythical stories of old …

This is a mural about 3 metres long on the wall of a Cambodian cremation centre. I asked a junior monk who could speak English what it represents and the information given was the one with the bull (ox) is Gautama Buddha, and with the tiger is Metteyya. The animals were said to be those that helped them in their lives. The Buddha often used the bull or pasture as an analogy in the suttas. Only the tortoise is an animal not from Chinese astrology. Also the mudras are different with Gautama Buddha showing the earth touching mode, and the bull is an earth sign in western astrology. The halo is yellow ochre which is known as an earth colour since it derives from minerals.

Cool art style, and I like the colors. It’s interesting to see how consistent the bodhisattva type iconography is. Just some cultural differences in the type of crown, ornaments, etc.

I’ll also mention that historically Maitreya Buddha also seems to have been associated with some texts in the Sutta Nipata:

At least in some Mahayana texts, Ajita is another name for Maitreya. I’m not sure if there is any clear connection between Snp 5.3 and DN 26. Maybe just the name Metteyya?

There have also been some speculations among scholars about Mitra / Mithra / Mithras / Maitreya, and possible Iranian connections or syncretism. In Indian Buddhism, Maitreya seems to have been most popular in the Northwest.

At least in some Mahayana texts, Ajita is another name for Maitreya.

That’s the name of the monk who’s given the prediction that he’ll become Maitreya in the future in the Madhyama Agama (MA 66).

Snp 5.2 doesn’t currently have any Chinese parallels identified, but I wonder if the verses aren’t found somewhere in the Avadana collections. If so, I’d wager it is connected to Maitreya.

I am not sure if I may be qualified to quote Visuddhimagga (Bhadantachariya Buddhaghosa, translation by Ñanamoli Thera), there is a Postscript (after Conclusion, page 837) where Metteyya Buddha is mentioned with utmosr veneration:

‘By the performance of such merit
As has been gained by me through this
And any other still in hand
So may I in my next becoming
Behold the joys of Tavatimsa,
Glad in the qualities of virtue
And unattached to sense desires
By having reached the first fruition,
And having in my last life seen
Metteyya, Lord of sages, Highest
Of persons in the World, and Helper
Delighting in all beings’ welfare
And heard that Holy One proclaim
The Teaching of the Noble Law,
May I grace the Victor’s Dispensation
By realizing its Highest Fruit

Behold the joys of Tavatimsa,

And having in my last life seen
Metteyya, Lord of sages…

Anyone know why this passage is referring to Trayastrimsa Heaven, and then to Maitreya? Canonically, isn’t it the case that Maitreya abides in Tusita Heaven?

This postscript refers to Buddhaghosa, the author of Visuddhimagga and it is his aspiration.

I cannot speak to his motivations in writing that, but perhaps it would be alleviate some confusion to point out that beings in higher realms are said to be capable of manifesting in lower realms, and it is suggested they do so with some frequency in nearby realms, such as Sakka commanding the Four Great Kings, or Brahma appearing in the 33’s “hall of justice”