This is a recent dhamma session I conducted-

Do you really understand what you wrote there?

Do you really understand what you wrote there?

Thanks for sharing @Mat
I like the Matrix references!

I like the “Vipassana Nana” chart because I am a chartist, not a fundamentalist. (Investing in share market terminology)

To further understand this chart please read below link.

The Vipassanā-ñāṇas (Pali, Sanskrit: Vipaśyanā-jñāna) or insight knowledges are various stages that a practitioner of Buddhist Vipassanā ("insight", "clear-seeing") meditation is said to pass through on the way to nibbana. This "progress of insight" (Visuddhiñana-katha) is outlined in various traditional Theravada Buddhist commentary texts such as the Patisambhidamagga, the Vimuttimagga and the Visuddhimagga. In Sarvastivadin abhidharma texts, the "path of insight" (darśana-mārga) one of the Th...

How the vipassana naana, map on to the visuddhimagga: http://enlight.lib.ntu.edu.tw/FULLTEXT/JR-AN/an141147.pdf

I left a slide out as I couldn’t convert it fully to a pdf: 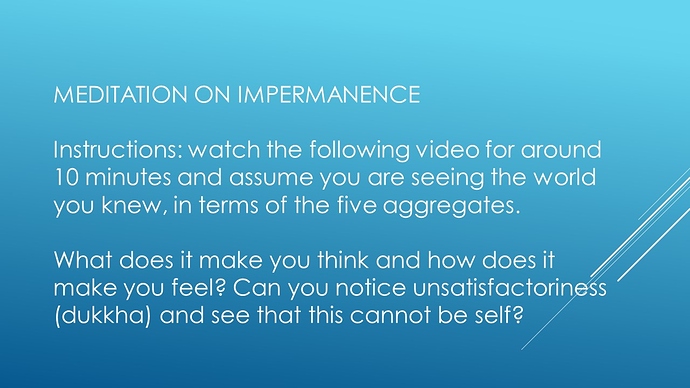 I also suggested poking the corner of the eye with a finger- the image then bends inwards- this shows we are not ‘in a 3 dimensional world’ but seeing the results of the process of seeing.

Yeah, it is amazing how much we take for granted the six basis.

The link below has a cool anatomical explanation of what is behind the visual distortions caused by poking/pression the eyeballs:

r/explainlikeimfive - ELI5:why when I poke one side of my eyeball I see a shadow...

To further understand this chart please read below link.

I find this analysis quite helpful - though it struck me that stages 6 and 7 highlight the need for some degree of metta.

it struck me that stages 6 and 7 highlight the need for some degree of metta.

What I am still trying to comprehend is the illusion of the mind.
It is easy to understand how mind create those pectures in the mind.
What we experience is the pre conditioned ideas of the mind.
How do you apply this to re-birth?
Does the deluded mind create a mirror immage of the same mind?

How do you apply this to re-birth?

Well at one point you may be aware of your death-bed and the next maybe floating (antarabhava) and after that, if awareness is possible, as a foetus or more likely a baby in the womb.

“illusion in mind”
Is that Vinnana or Namarupa?

I imagine the picture of “Mat”
Mat is teaching Dhamma.
Who is teacing who is learning?
Is Matt and I an illusion in my mind or an illusion in Mat’s mind?

Is that Vinnana or Namarupa?

I prefer you stay with the English meaning of ‘illusion in the mind’, as it is meant for people without the need for further complicated dhamma. Having said that, if you were analysing it after seeing the presentation, the illusion of the animals manifest at sanna level, and vanish with concentration.

Easier to explain using physics - at one level we both exist - at another level we are just mostly empty atoms, and ‘people’ don’t exist.

it struck me that stages 6 and 7 highlight the need for some degree of metta.

SW1:Agree.
Perhaps 6,7 and 8, I would say.
It appears the practioner is in a cross road at this stage. Perhapswithout Metta the practioner may have some tendancy to end his life.

Yes, that is where good jhana or samadhi is crucial, as it serves a ‘holding’ function to the more ‘deconstructive’ function of vipassana mechanisms. People with mental health issues need to have sorted things out before getting in into these deep waters or in any case everyone should be doing this ideally in a retreat setting with an teacher experienced with dealing with vipassana progress (repulsion, dispassion, cessation as is more commonly noted in the EBTs).

Yes, that is where good jhana or samadhi is crucial, as it serves a ‘holding’ function to the more ‘deconstructive’ function of vipassana mechanisms.

Indeed, and I think it’s also worth noting that the 7 factors of enlightenment include energy, joy and tranquillity.

I also find it useful to remember that Nibbana is described as the “escape” from samsara, or more prosaically, that stillness is an “escape” from the movement of mind and senses.

Indeed, and I think it’s also worth noting that the 7 factors of enlightenment include energy, joy and tranquillity.

True. It is also said that in the ‘knowledge of arising and passing away stage’ energy, joy and tranquillity can arise ie before nibbida (although these are ‘corruptions of insight’ I think they are actually arising due to samadhi arising).