Sometimes it seems that, when writing about climate change and other existentialist threats, the author somehow feels obliged to give you a moral lecture on how we must never lose hope, no matter what happens.

Last week I talked about the virtues of losing hope. How “hope” was not a Buddhist virtue, but was imported from messianic Christianity. How the Buddha’s teachings were focused on what we can do and see now, rather than a fact-free devotion to a redemptive future. And about how the insistence on hope was, after all, nothing more than a symptom of fear.

As if by magic, in today’s Guardian there was a lovely story of a fellow who found happiness only on the far side of hope.

I gave up hope of a cure for my chronic condition. And it’s made me happier...

For 30 years, I tried to ‘fight’ it. In the end, I found relief in embracing my identity as a person with a disability, says sociologist Keith Kahn-Harris

I’m wondering whether anyone has other stories to tell?

Thanks again for the talk last night (where I am in EST),

Should you have any questions, feel free to contact the @moderators.

Awesome, thanks! Now I don’t feel quite so lonely in my dishopianism.

For those who don’t want to click thru to twitter, it’s a quote from Mike Davis, described as “one of the greatest historians of social movements”. 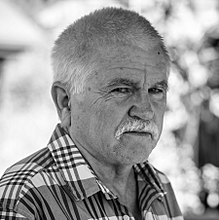 Mike Davis (born 1946) is an American writer, political activist, urban theorist, and historian. He is best known for his investigations of power and social class in his native Southern California. His most recent book is Set the Night on Fire: L.A. in the Sixties, co-authored by Jon Wiener. Born in Fontana, California and raised in El Cajon, California, Davis' education was punctuated by stints as a meat cutter, truck driver, and a Congress of Racial Equality and Students for a Democratic Soc... 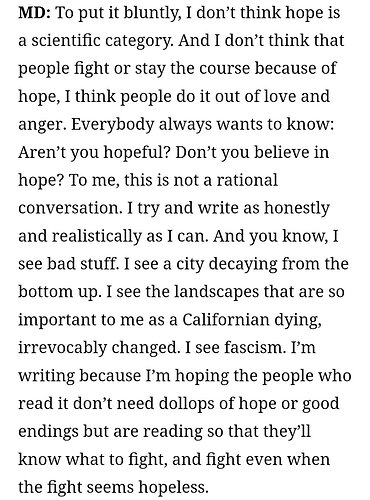 How “hope” was not a Buddhist virtue, but was imported from messianic Christianity. How the Buddha’s teachings were focused on what we can do and see now, rather than a fact-free devotion to a redemptive future. And about how the insistence on hope was, after all, nothing more than a symptom of fear.

Bhante. I wonder if you could comment on how you see the implicit suggestion in the four noble truths that the path leads to the highest happiness? I’ve always thought that this was a Buddhist version of Christian “hope”. Whereas things like giving up the idea that you will be cured of a sickness is just giving up on desire for things to be other than they are (in Christian parlance it might be something like leaving it in the hands of God).

Of course in both religions the sane response to sickness is to choose a team of experts, let them do their stuff, follow their advice as best you can and get on with your life.

One of my early Tibetan teachers once put it into this simile:

Imagine you are sinking down in a deep ocean. You are struggling to find your way to the surface, but you don’t really know where you are heading towards, as there is no orientation. So you hope you are going in the right direction, and as long as you hope, you struggle.

Until you reach the ground. Now you know that it wasn’t the right direction. Hope has ended. You stop struggling. There’s a sense of peace.

Reflections:
Hoping puts us in a passive position.
Letting go of hope while undertaking wholesome thoughts and actions uplifts the heart and creates momentum.

When we hope, there’s the stress of being unfulfilled; and if a particular hope is fulfilled, the mind then moves to the next hope, and the next, and the next…

Story: My wife was diagnosed with incurable metastatic cancer. She quickly gave up hope for things to be otherwise and for the rest of the short time remaining expressed her life as one of grace under pressure, kindness, and seeing to the needs of others. She was freed from the shackles of hoping for herself so had the energy and openness of heart to help others and to set an example for our children.

In my past experience, hope can feel like we’re a cork bobbing on the ocean, at the whim of wind and waves.
Deciding and acting in wholesome ways (see N8FP

), is like being in a boat with a sail and a tiller. Not yet the utter safety of the other shore, but on the way!

Emotions of hope and fear cannot be in themselves good.

We may add, that these emotions show defective knowledge and an absence of power in the mind; for the same reason confidence, despair, joy, and disappointment are signs of a want of mental power. For although confidence and joy are pleasurable emotions, they nevertheless imply a preceding pain, namely, hope and fear. Wherefore the more we endeavour to be guided by reason, the less do we depend on hope; we endeavour to free ourselves from fear, and, as far as we can, to dominate fortune, directing our actions by the sure counsels of wisdom."

Hopefully this is okay, as @sujato was asking for stories and not philosophical demonstrations.

And thanks @Ric for the warm welcome!

We lost hope after being bumped off the server close to 9 times at the beginning of your talk, so we packed up the device and went and meditated.

I’m wondering whether anyone has other stories to tell?

I don’t have one of my own, but Czesław Miłosz in The Captive Mind has a great story to tell.

As does Václav Havel in The Power of the Powerless.

In particular, see Havel’s extended simile of the greengrocer, which Bob Moeller has conveniently excerpted here.

Last, but not least, Aleksandr Solzhenitsyn’s Live not by Lies.

Not exactly a tale, but as a former musician perhaps Bhante will appreciate some Joanna Newsom: