Is mātugāmasseta the 'feminine ideal'?

In Polish, rooster is “Kogut”.

It is onomatopoetic term, so the word for rooster is based on the sound he makes. Like cock in English or cucurio in Latin.

This is true, but it is also a shared word from Primitive Indo-European, not an individual development in each place.

It’s profitable to consider the Buddha-to-be did not avoid the flow, but defeated it in the Victory Over Mara with the ratification of deeds by a female goddess. In Cambodia this event is depicted as a woman wringing water out of her hair, standing (overcoming) on the back of a crocodile. The water represents the coolness of the detached mind. There is a striking difference in colour between them, indicating two separate realities. In right view of realities it’s not profiable to avoid the idea of ‘opposite:’ 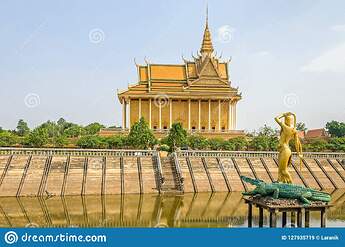 The reason for my original question, and misreading of the Pāḷī, was that I heard the sutta remember as being Venerable Thanissaro’s translation which has mātugāmasseta as ‘opposite gender’ (and sharks instead of crocodiles). I figured that the Buddha probably didn’t say that and I don’t like the idea of ‘opposite’.
I got thinking, what is it we are attracted to? It seems to me, at least in part, that it’s the idea of femininity, masculinity or maybe even androgyny/the play-of-genders that can spark that attraction. It’s nothing to do with the human object we project it on. It’s that ‘ideal’ which becomes the monster which chases us and can easily eat us up.

it’s the idea of femininity, masculinity

Rendering ‘mātugamass’ as “opposite gender” is perhaps an attempt to be gender neutral.
But the word clearly means “women”.

Margaret Cone gives “containing rapacious water-creatures” for “sagaha”.
That seems to cover a lot! Not sure where either ‘crocodile’ or ‘shark’ comes from.

I believe the commentary glosses the word with candamacchamakarādinā, similar to Cone.

I have a perspective/insight to offer outside of Buddhism that may yield some clues.

There is something called “Leviathan” and it is named different things in different traditions/religions. It is a sea serpent, or a dragon…or crocodile/monster in this case (not in a literal sense)

And it’s the barrier between this realm and nibbana. It’s the thing that keeps us reincarnating, chewing us up and spitting us back out spiritually. There are images of the Buddha taming/overcoming this dragon and it now offering him protection instead of enslaving him. This is achieved through mastering all worldly things, which is a process of internal purification and it does involve masculine and feminine Union (many of you touched on that)

Hi Stephen. How does the above translate? “Women of the village; householder women; mothers of the household”? Thank you

Just as above, literally something like,
‘This for women’ (is a designation/term)

‘mātugāma’ is a collective term for women, womenfolk, females.

‘mātugāma’ is a collective term for women, womenfolk, females.

But if gāma can mean “village”, cannot it exclusively refer to “woman as householders”?

Gāma does have the meaning of “village”, but it seems to have a more fundamental sense of ‘collection’. As the second member of this compound, this is how it is functioning.

Btw, the Pali word rendered as ‘householder’ is ‘gahapati’, literally ‘lord of the house’, it seems unlikely a woman at that time period would be awarded that term.
Today we think of the term as ‘lay practitioner’, in contrast to a monastic.

You may have meant ‘Proto Indo European’ as an innocent mistake, but just in case or for anyone else who may be unaware: PIE (Proto-Indo-European) language was not any more or less primitive than modern languages; it was just like French or German is to us now, with a community of speakers, a culture, dialects, etc. In other words, it is not an earlier stage of human language but fully-fledged language that was a node in time from which the modern IE languages descended and continue to evolve. It is called ‘Proto’ because of this and because our only window into what it was like is theoretical reconstruction. Languages like ‘Proto-Germanic’ or ‘Proto-Uralic’ exist as well and are the same thing: theoretically once living languages that are reconstructed and the ancestors of some language or family of them

Mātugāma Saṃyutta of SN does not have a corresponding SA counterpart. One may need to consider why, why not?

a sea serpent, or a dragon…or crocodile

It seems the animals are more personifications of the dangers of flowing water, a river which has to be crossed. The Buddha never genderizes it, “in the seen there is only the seen,” and also uses water to illustrate opposite positive qualities:

Btw, the Pali word rendered as ‘householder’ is ‘gahapati’, literally ‘lord of the house’, it seems unlikely a woman at that time period would be awarded that term.

Women have their own female form, gahapatānī.

The particular named women that I recall being referred to by this term mostly seem to be the wives of gahapatis (e.g., Nakulamātā), so it’s not clear to me whether a single woman or widow with her own home would also count as a gahapatānī. The commentarial gloss of “female house-owner” (gehasāminī) indicates that she might do. A possible example would be Vedehikā gahapatānī of the Kaka­cūpama­sutta; though it’s not explicitly stated that she’s single, there’s no mention of a husband in the story.

Aha, I hadn’t thought of that word.
Cone defines it as “the mistress of a house; the wife of a gahapati.”

She makes reference to the Kakacūpama Sutta, as you did. Ven. Bodhi seems to translate this as ‘housewife named Vedehikā’ and ‘Mistress Vedehikā.’

In any case, the word does not seem directly related to mātugāma.

We have gahapatani, as well as itthi, in the bhikkhuni patimokkha.
It seems that a gahapatani might have more status than a mātugāma, as mātugāma is used in contrast with bhikkhu. (see the thread I link in the OP)

If mātugāma is used in the bhikkhuni patimokkha in contrast with bhikkhu (instead of bhikkhuni?), is gahapatānī used in contrast to gahapati?

Some interesting comparisons here, does the lay gahapatātī have a higher status than a bhikkhuni?

If mātugāma is used in the bhikkhuni patimokkha in contrast with bhikkhu (instead of bhikkhuni?), is gahapatānī used in contrast to gahapati?

Sorry, I wasn’t clear. Mātugāma isn’t in the patimokkha. Only itthi and gahapatiani.
The contrast was mentioned by Bhante Sujāto here, where it seems that mātugāma is contrast in the sense that the there is the bhikkhun who is (aiming for) trancendance and the worldly/temptress woman mātugāma. So the contrast is ethical-ish.

Btw, I notice in the translation choices I quoted from the Kakacūpama Sutta, both “housewife”, and “Mistress” have taken on negative connotations, is there a better choice for gahapatānī?

Maybe part of the problem is that the term gahapatānī seems to label a woman by her relationship to a man (kind of a deBeauvoir-ish issue, no?), so the English translation choices inevitably do so as well.