Is postmodernism "a product of sheer stupidity" according to Buddhism?

It looks as if Buddha noticed this problem too with postmodernist of his time, called Ajnana. A modern complain about postmodernism, aside from being self-refuting and useless, is being nonsensical. A problem also exposed by the famous Sokal Affair.

It appears that Buddhism also considers this philosophy “a product of sheer stupidity”:

Maybe this is why people make so much fun of postmodernism today in modern times too. And we see that Jains refuted them in the same way, by showing that they are self refuting, as shown in this meme: 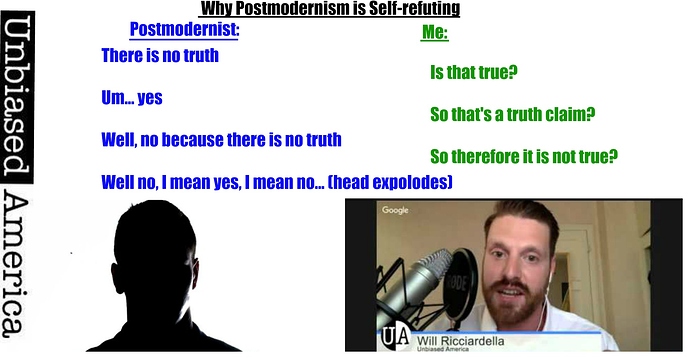 On top of that, Buddha also called them “a philosophy of eer-wrigglers” and it was considered one of the worst kinds of wrong view because it leads to disregard for morality. Other philosophies may be wrong, but few advocate for non-importance of morality.

Therefore, according to Buddhism, it’s not only a wrong philosophy “product of sheer stupidity” but also a very detrimental wrong view. And yes, we have a meme explaining this too: 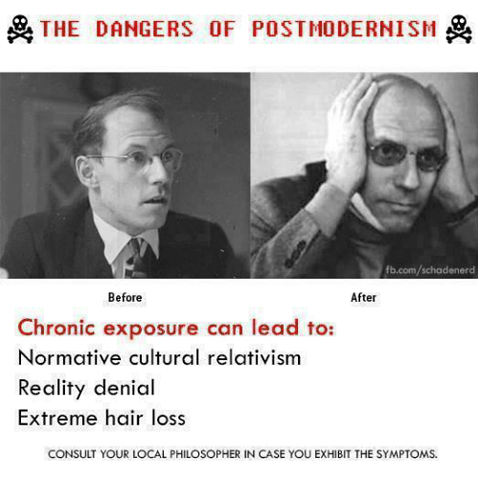 I have been having this conversation on another board and it was brought to me that postmodernism is a useful and much needed criticism of science and is very beneficial to buddhism, being a door to Buddhism. This made me remember B.Sujato book about problems with study of early buddhist texts. As a Romanian, these problems in buddhism studies look 5 times more stupid than they probably look to Sujato because this thing doesn’t exist here, we are not familiar with it. It looks much more stupid when you are not familiar with it. Here was my response:

On the contrary, it has brought nothing but stupidity to Buddhism. B. Sujato considers postmodernism is responsible for setting early buddhist texts study back by a generation. He has even wrote a book against the idea that “we can never know anything for sure, therefore study of early buddhist texts is useless”, showing you can actually know a lot about early buddhist text by using the scientific method: http://ocbs.org/wp-content/uploads/2015/09/authenticity.pdf

Postmodernism, as Buddha has noticed too, is “a product of sheer stupidity”. It questions everything and does so in a stupid manner, not an intelligent one. It never argues based on scientific or logical arguments, it just says “we can never know anything for sure about early buddhist texts” and presents no arguments. It just makes this claim and that’s it, that’s the end of it. It’s such a simple and stupid tactic that the smoking industry had used it for a long time. They said “we have no idea if smoking is bad for your health, there is just not enough evidence” and no matter how much evidence one might bring, the postmodernist will just say “nope, it’s not enough, I’m not convinced, I will never be convinced because the scientific method and logic itself is flawed so all evidence is useless, the whole debate is useless”.

It is completely anti-science and anti-intellectual. It’s a return to the stone age in terms of intellectualism. That’s why postmodernist philosophers have been sometimes called IYIs (intellectual yet idiot) or “82 IQ philosophers”. Even in the stone age people tried to have some sense, even though their use of logic was not the best. But with postmodernism, there is no logic, it’s stupidity in its purest form.

This is why out of 62 schools of philosophy, postmodernism was singled out by the Buddha as being “a product of sheer stupidity”.

“I don’t believe this, no matter how much evidence you might present me cause all that evidence is flawed because logic is flawed to begin with. But… I do believe all these postmodernist ideas. Why do I believe in them ? Well, it never occurred to us this question because, as Buddha said, we’re not the brightest of the 62 schools of philosophy around.”

PS: If one really wants to question science, he should do so in a smart way, not like an idiot.

It’s amusing how even Lenin called them “the useful idiots”. Even if their use of rationality was mostly flawed, communist countries were the biggest lovers rationalism in the world. Education was focused entirely on scientific fields while art, philosophy or other such fields were considered useless. Communist could not be more against such ridiculous ideas held by postmodernist. Yet, postmodernist in the US somehow ended up being marxist and supporting the USSR. This is because those who initially made popular this school of philosophy were rebel marxist, disappointed that communist could not care less about them. They started the Frankfurt school and then moved to US after the war.

That is why Lenin called them “the useful idiots”. They were idiots for him just like they were for the Buddha, but at least they were useful.

I would like to point out what Buddha said about them is not bashing. Some countries are very direct in their way of speaking, while others such as english-speaking countries are the total opposite. We know from records and from the suttas themselves that Indian society was a pretty direct society, similar to continental europeans.

It’s not bashing because he never bashed any other philosophy. If Buddha would say this about 10 schools of philosophy then it might be considered bashing. But out of the 62 schools of philosophy, postmodernism is the only one considered to be “a product of sheer stupidity”. And I would say he was very gentle in his evaluation of the situation. If we look at the 90s “science wars” or modern criticism of this philosophy, we see that people are much more aggressive in ridiculing it.

There is even such a thing called “Postmodernism Generator”: http://www.wikiwand.com/en/Postmodernism_Generator

The Postmodernism Generator is a computer program that automatically produces imitations of postmodernist writing. It was written in 1996 by Andrew C. Bulhak of Monash University using the Dada Engine, a system for generating random text from recursive grammars. A free version is also hosted online. The essays are produced from a formal grammar defined by a recursive transition network. Nassim Nicholas Taleb writes about “Monte Carlo generators” in his 2001 book Fooled by Randomness as a real instance of the reverse Turing test: a human can be declared unintelligent if his or her writing cannot be told apart from a generated one. It was mentioned by biologist Richard Dawkins in the conclusion to his article “Postmodernism Disrobed”[1] (1998) for the scientific journal Nature, reprinted in his book A Devil’s Chaplain (2004).[2]

This link generates a random postmodernist nonsensical article every time it is accessed: http://www.elsewhere.org/pomo/

It looks that from all people, 78 IQ philosophers are going to be among the first ones replaced by machines in this modern era.