Is the Thai Tipitaka available in roman script?

Might anyone know what the Red Elephant edition of the Siamese Tipitaka refer to?

Might anyone know what the Red Elephant edition of the Siamese Tipitaka refer to?

It’s a nickname for the Royal Siamese edition of 1927, on account of its cover. 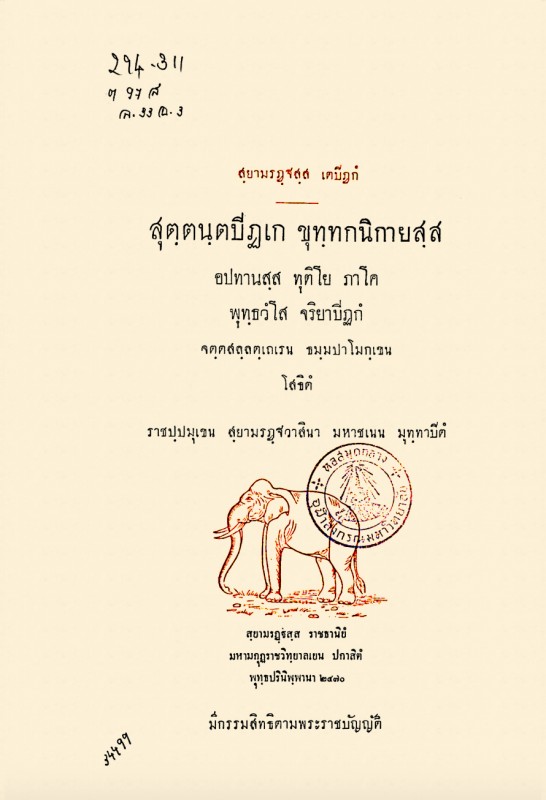 These refer to the two translated texts. But it also has the Pali of the Siam Rath edition. So I’m guessing that this is the same as the edition supplied by Ven Dhammanando, the 1995 Siam Rath, which again I am guessing is a digitization of the 1927 Siam Rath. Which however leaves unexplained why the 1927 and 1995 editions are listed as separate entities on the iOS app. (I can’t get e-tipitaka working on Android or Linux, so can only see the website.)

Checking the Romanized Pali text on 84000, it is not the same as the PTS edition or the VRI edition. There is a mistake near the beginning of the Veranjakanda, on the second occurrence it has bhikkhusaṅghena saddhiṃ pañcamattehi, omitting the following bhikkhusatehi. The same omission is in the Thai edition, so the Roman must be generated from that.

So, this confirms what others have said above, we have one Romanized version of the Thai tipitaka. This is called “Pali Roman” on the 84000 site, and is produced from the edition called there the “Pali edition in Thai characters”.

Putting this all together, I think the situation is as follows. Please may the venerables more learned than me correct me!

There is one digitized edition of the Pali canon in Pali from Thailand. This edition is known as the Siam Rath ( สยามรัฐ) edition, and is also sometimes called the Royal Edition. It was digitized in 1995 by the monks from Mahachula University, based on the 1927 Siam Rath edition. It has been converted to Roman characters and is available as such from http://www.84000.org/ and Ven Dhammanando’s files posted above.

I feel difficult to follow this topic which variation is mentioned…
For reference, here is a table of various scripts by Dhamma Society in Thai.

It is indeed confusing!

In the chart to which you link, the Chulachomklao edition is the one I linked above, where you can see the scanned images.

Syāmaraṭṭhassa Tepiṭakaṃ of 1995 is, I believe, the basis for the digitized editions that I have discussed above (Siam Rath). So far, I haven’t seen evidence that other editions have been digitized.

the 1995 Siam Rath, which again I am guessing is a digitization of the 1927 Siam Rath

I’m not so sure. They are clearly two different texts in the app (though both have the telltale error you mention): 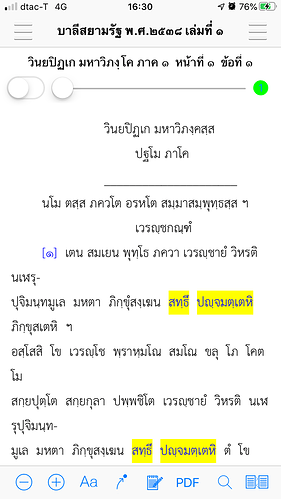 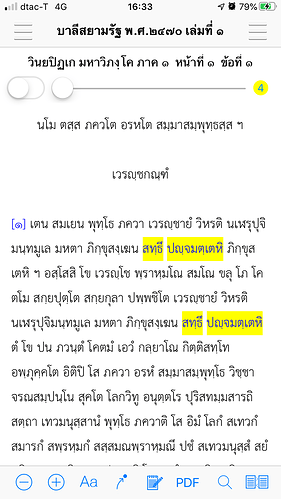 If there’s anything in particular you’d like me to look up let me know.

Bhante, in the footnotes of the suttas, what do the abbreviations sī, yu,po,ka stand for ?

Bhante, in the footnotes of the suttas, what do the abbreviations sī, yu,po,ka stand for?

They identify the sources of the variant readings.