Is there a collection of suttas in Brahmi script?

I searched around on the internet and can’t find any source for such Brahmi based texts. Any idea?

It’s not really what you are asking for (I don’t think) but you may be interested in this conversion tool:

It can take a text and convert it to Brahmi.

Here on Suttacentral you can change your script to Brahmi (under change Pali script). 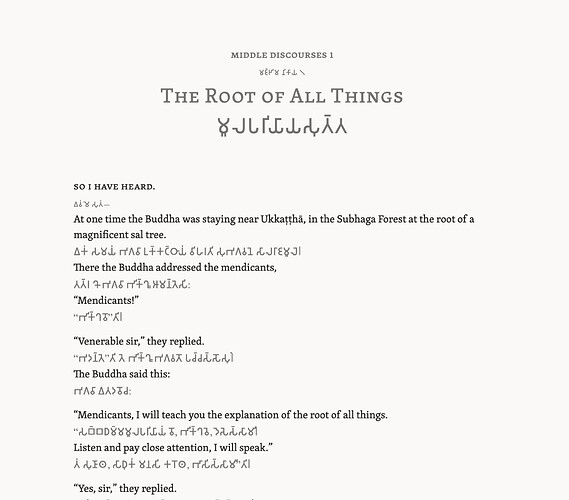 Very nice! Brahmi script can be displayed on my phone but not my desktop browser, any expert here can help?

not my desktop browser, any expert here can help?

What operating system and browser are you using?

Chrome and Win 10. I will check my Chrome version (it’s fairly newly updated about 2 months ago) when I can access my desktop later.

but not my desktop browser,

It would also be helpful if you could give a screenshot of what it looks like. Just saying that it doesn’t work may not be enough for someone to troublehshoot. Are you seeing any characters at all where you would expect to see the Brahmi? Are you seeing square boxes? Do any of the other alphabets work?

Also, try to do a ctrl shift reload to clear your cache.

The trick seems to be my desktop needs time to load the font. It is just strange that my 3 years old phone can be faster than my desktop in this task.