Is there an existing JSON file that lists all bilara translations for a specific language?

Is there an existing JSON file that lists all bilara translations for a specific language? Or would it be possible to have one auto generated when a build is created?

Here is the use case:

I have a monk friend who is trying to learn to speak (and eventually teach in) French. So I am thinking about creating a sort of tri-linear Pali-English-Xlaguage interface. The problem is that for non-English translations (excepting German) the number of bilar translations is very, very few.

However if there was a JSON file for each language, then I could easily create an interface that allowed someone to pick from existing translations.

I know you are busy now, Bhante @Sujato, but perhaps when you are done with your course you could share your thoughts.

Is there an existing JSON file that lists all bilara translations for a specific language?

It’s not a single file, but you find everything that is translated into French in the bilara-data “published” repository bilara-data/translation/fr at published · suttacentral/bilara-data · GitHub.

EBT-sites do already have an interface for showing trilingual mode, although French hasn’t been added to the languages so far. 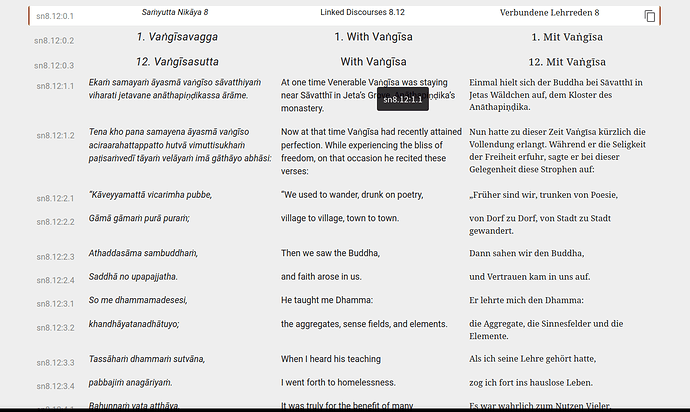 The problem I’m trying to solve is programmatically knowing what is is available. I know I can manually look at what is available in the folders of translated texts.

Voice and ebt-sites use this one, but it’s not specific for one particular language. 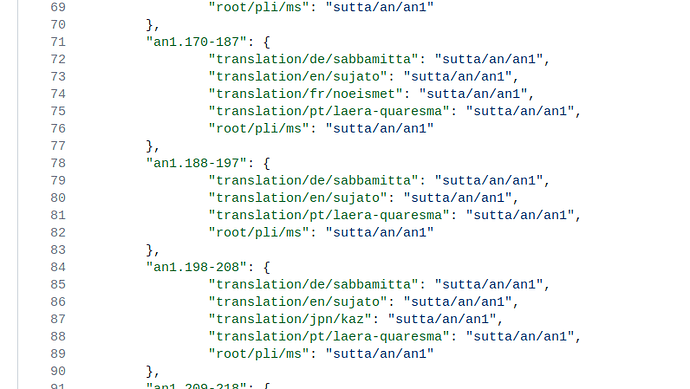 If you want to define a clear use case that is a little more widely applicable, make a proposal on Github and we’ll consider it.

I may need suggestions from others to flesh it out. In general, it seems that for languages that have very few translations done in Bilara, there is no easy way for someone to access them. For example, even if I were to just tell this monk to look for French translations on the main website (setting aside the legacy texts) there is no easy way for him to get to them.

This same issue came up regarding the random sutta getter. A request was made for a Portuguese version. Currently there are only about 200 translations. There is no easy way to just get a list of those (that I can see).

Basically if you want to do any fun stuff with the non-English translations on Bilara, there isn’t an easy way to.

Set the site language to French.

Another enhancement would be to add a navigation capability to the /language pages, so you can start there. I’d be interested to do that, but we would need some time.

Set the site language to French.

Of course that is a necessary feature. However doing that doesn’t actually take you to any French translations. You have to just take a guess at where they may be hiding. One solution might be to hide all books/vaggas etc if there is nothing French hiding behind them. Then the only choices you would have would take you to translations.

I’m not criticizing. It’s a difficult problem to solve.

But you do see the number of available translations in the chosen language for each stage of navigation. What you don’t see, though, is whether any of them is segmented or not—which is, as I understand it, the required information here.

you do see the number of available translations

But the idea of accessing texts of that language more directly via the language page is, I think interesting and I’ll definitely look into it. maybe it won’t be hard.