Kenzo Tange and the creation of The Lumbini Masterplan

Kenzo Tange and the creation of The Lumbini Masterplan – Lumbini Museum

We’re back with Museum in Motion after a brief hiatus. Our fifth instalment features Justin McDaniel, who teaches Buddhism and Southeast Asian Studies at the University of Pennsylvania. Drawing from his book Architects of Buddhist Leisure, Justin McDaniel examines the way in which Kenzo Tange went about creating Lumbini’s pilgrimage park, and how his masterplan has had to adapt to local conditions and changes. He also discusses the way in which Lumbini and other Buddhist leisure parks have contributed to a growing Buddhist ecumenism at a global level.

The presenter:
https://rels.sas.upenn.edu/people/mcdaniel
From his bio:

The book mentioned in the event description: 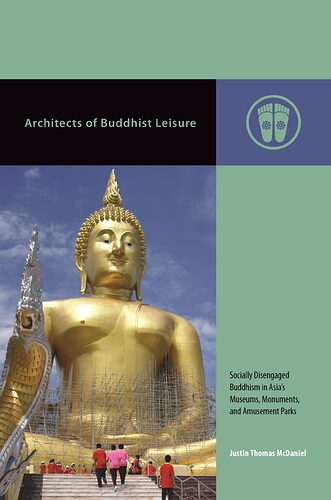 I’ve read part of the book and it’s really interesting.
From the publisher’s site above:

Justin McDaniel looks at the growth of Asia’s culture of Buddhist leisure—what he calls “socially disengaged Buddhism”—through a study of architects responsible for monuments, museums, amusement parks, and other sites. In conversation with noted theorists of material and visual culture and anthropologists of art, McDaniel argues that such sites highlight the importance of public, leisure, and spectacle culture from a Buddhist perspective and illustrate how “secular” and “religious,” “public” and “private,” are in many ways false binaries. Moreover, places like Lek Wiriyaphan’s Sanctuary of Truth in Thailand, Suối Tiên Amusement Park in Saigon, and Shi Fa Zhao’s multilevel museum/ritual space/tea house in Singapore reflect a growing Buddhist ecumenism built through repetitive affective encounters instead of didactic sermons and sectarian developments. They present different Buddhist traditions, images, and aesthetic expressions as united but not uniform, collected but not concise: Together they form a gathering, not a movement.