Wikipedia sometimes has a Sanskrit font, Pali font etc ‘translation’ of the Pali words I look up but not always - and I’m hoping there is a resource that offers at least the big basic terms / phrases in Pali font. Not our alphabet, but written in the actual Pali alphabet. I love the way it looks and feels, and I find it adds to my experience of the suttas. I would love to have a more thorough go-to than Wikipedia! Can anyone point me to a resource?

There is no such thing.

Indian nationalists on Wikipedia have been adding devanagari to Pāḷi terms, but this is a political agenda, not historical accuracy. Pāḷi has always been written in the local script of the place the Dhamma came to: from the Brahmi of the Ashokan pillars, to the Khmer of Cambodia, to the Latin script of the West, Pāḷi is an oral tradition that only incidentally gets written down.

So feel free to learn whatever script you like! This website has a pretty complete collection of the various ways Pāḷi can be written:

Just don’t fall for the propoganda that any one script is more “pure” or “holy” or “real” than any other.

Note that you can select different scripts for Pali on SuttaCentral if you open the “views” panel via the button in the top right corner:

I’m not even sure if it’s proper to say that there is a Sanskrit script, is it? Now (and obviously for a very long time) Devanagri is used, but it was also an oral language only for some time, too, eh?

And big thanks to Vens @Khemarato.bhikkhu and @sabbamitta for your info.

I’m not even sure if it’s proper to say that there is a Sanskrit script, is it? Now (and obviously for a very long time) Devanagri is used

It’s not even that. Like Pali, Sanskrit was written down in whatever the local script was. Devanagari as known today has been in use from about the 11th century, but it wasn’t until modern times that it came to be considered the “standard” script.

The closest thing Pali has a “native” script would be Brahmi, but no-one’s used it for a thousand years. 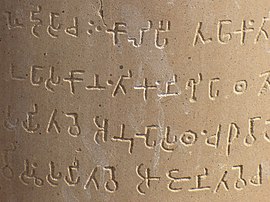 Brahmi (/ˈbrɑːmi/; .mw-parser-output .script-brahmi{font-family:"Segoe UI Historic","Noto Sans Brahmi"}𑀩𑁆𑀭𑀸𑀳𑁆𑀫𑀻; ISO: Brāhmī) is a writing system of ancient South Asia. The Brahmi writing system, or script, appeared as a fully developed universal one in South Asia in the third century BCE, and is a forerunner of all writing systems that have found use in South Asia with the exception of the Indus script of the third millennium BCE, the Kharosthi script, which originated in what today is no Brahm...

no-one’s used it for a thousand years.

Do we know if it was used outside the Ashokan stone inscriptions? Because I thought it doesn’t have all the gliphs required for Pali.

If memory serves, there are e.g. cave inscriptions soon after Ashoka that are also in Brahmi and then even later inscriptions in Brahmi-ish scripts down all the way to the present day, since most of the South/Southeast Asian scripts are actually great great great grandchildren of Brahmi… So it’s more like how nobody speaks Middle English today… because we now have English 3.0. But I am no expert and patiently await the real answer

This is from Richard Salomon’s book “Indian Epigraphy” 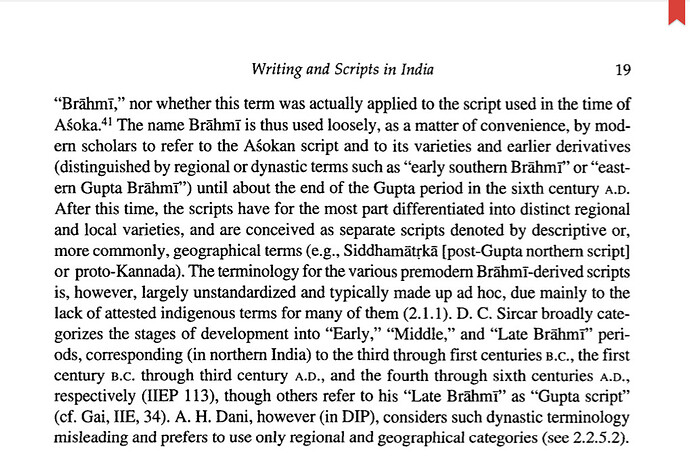 Looks like the script has been classified into different stages… 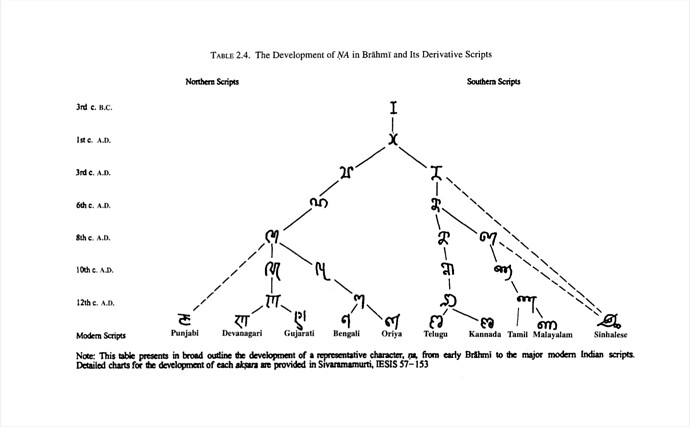 Like Bhante Sujato says above, the Devanagari script has its on evolutionary timeline and not the ‘default’ ( if there ever was) script for Pali.

(Such a cool subject which I have zero expertise in, but super keen to learn

you can select different scripts for Pali on SuttaCentral

(I love this feature! helps me with the pronunciation)

I love these facts so much! Intrigue, drama, nationalistic deployment of niche scripts! I had literally no idea any of this was a thing.

This is very helpful, thanks a lot.

Looks like the script has been classified into different stages…

We have to bear in mind that both Pali and the Brahmi script were changing over centuries; this means there’s not a simple intersection.

The earliest (indisputably dated) and best-known Brahmi inscriptions are the rock-cut edicts of Ashoka in north-central India, dating to 250–232 BCE.

Note that you can select different scripts for Pali on SuttaCentral if you open the “views” panel via the button in the top right corner:

Thank you for that! I’ve never thought to explore by scrolling to the right! There are more wonders to discover!