Link back to Sutta Central?

I’ve noticed that if I’m in Discourse, there is no link back Sutta Central (as in the place where the suttas live), despite the title being Sutta Central. I would have expected to be able to click on “Sutta Central” and see some suttas

You’re right, we’re working on it.

and what about adding share buttons on suttas pages?

or they could be tucked into the slider

Check how CBETA does it: every page serves links for Google, Yahoo, Funp, Hemidemi, and Plurk. No idea what the last three are, but presumably they’re popular in Taiwan. How many times have people shared this page? I’m guessing zero. It’s this kind of undisciplined development that leads to CBETA requiring 120 requests to the server to deliver a page in over 6 seconds; on a comparable page SuttaCentral makes 23 requests and serves a page in a little over a second.

If you want to share a page, copy the URL. Our URLs are awesome: short, consistent, meaningful.

Where this doesn’t work well is on touch devices, especially phones, where copying a URL is not so easy (especially as iPhone hides the URL). In an app, therefore, we might want to include a sharing button. Not sure how iPhone does it, but in Android you can easily put in a little widget that will share with your choice of social media. That way we’re not promoting one social media network over another, but making it easier to use the one you use anyway.

i’m not an expert, but maybe if these buttons are hidden somewhere under the hood, like again in a slider, the existing one or a dedicated one, the loading speed of the sutta page won’t be affected and server requests will only be made once the slider is opened

anyway that was just an idea thrown out there

How many times have people shared this page? I’m guessing zero.

they shared it 47 times 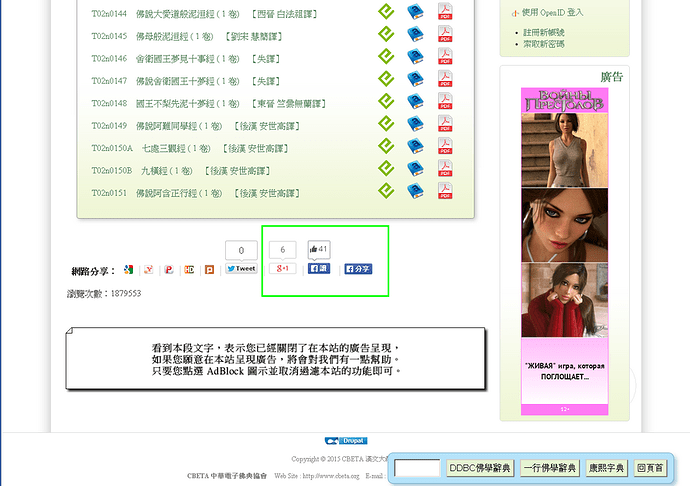 Okay, I’m busted! I knew there were counters on there somewhere, but my adblock or something is blocking them.

But the actual counts just confirm my points. On this page, after, what, nearly 10 years, there’s a few likes on facebook, a few shares on Google+, which no-one uses, and zero tweets. I checked ten of the suttas linked to from this page and there was a grand total of three likes for the lot of them, and zero tweets. Yet the twitter widget is being diligently displayed for each page, taking bandwidth to proudly display a click count of zero. And for what?

Theoretically, yes, you can write some code for the sidebar—which takes time, money, and thought, and has to be loaded each time you load the sidebar—that will pull the sharing widgets in when the sidebar is opened. And congratulations, you’ve succeeded once again in using your time, space, money, and bandwidth to place ads for massive corporations.

Oh, and one problem I didn’t mention earlier: these widgets are a privacy menace. They track your movements across the web, even if you don’t click them.

i don’t think these articles apply to Suttacentral as they mainly deal with the subject from the marketability and profile standpoint, which are irrelevant for Suttacentral

still i acknowledge technical problems their usage may entail

but if nothing else, just one button which brings up a pop-up panel with the sutta name and address for copy and paste elsewhere, could do the job

one button which brings up a pop-up panel with the sutta name and address for copy and paste elsewhere, could do the job

Interesting idea. @blake, what do you think of this? We could maybe do it on right click or something, then create a copyable:

Just bumping this, since it seems strange to be on Discourse and not have a link to Sutta Central itself…

I’ve noticed that if I’m in Discourse, there is no link back Sutta Central (as in the place where the suttas live), despite the title being Sutta Central. I would have expected to be able to click on “Sutta Central” and see some suttas

Thanks for the bump, hopefully @blake can fix this in the next round of bugfixes.

It’s super easy to modify the discourse header, the question is how we want to supplant the existing behavior. By the way, if you add content to the header under discourse customization, by default it forms a second header on top of the existing one; when you scroll down, it scrolls off the top. Here is a quick and dirty example:
https://discourse.suttacentral.net/?preview-style=ee7eb2db-5981-4626-9e22-8abea70d7a9a

I think this behavior is intended so you can add a “domain header” above the discourse “subdomain” header.

Sure, a prettied up version of this would be fine.

Yes, that’s great. It’s odd if you can’t get to SC from here…

I note that this link now exists, and works fine on my laptop.

However, there seem to be some problems on Android and IOS.

On my Android phone the graphic is not showing (shows a broken graphic symbol),

On an oldish IPhone the graphic also doesn’t show, but there is a blank space that takes up most of the screen.

Sorry if this sounds confusing. I’m happy to be more specific if it’s not clear what is happening.

@Vimala, can you have a look at this?

It should be working now … my fault and thanks for spotting it @mikenz66.
Can you please check on your devices?

Looks good on my devices now. Thanks.