It’s just that throughout the day our right hands are usually acting on intention while our left hands are supportive and adaptive. I will eat with my right hand while holding the bowl with my left hand. Sleeping on the right side reverses that daily tendency by making the right side supportive and unfettering the left side. That interpretation works for me but I’m sure there are many other views that would fit.

I see! Sorry to read into your comment. My thinking is that not having access to the right hand in bed was key but for a different reason! Of course there is nothing explicitly stating that in the suttas, but the rules for monks make it clear that the issue was firmly in mind.

the rules for monks make it clear that the issue was firmly in mind.

How interesting! Would you have a reference? I’d presumed that going forth would only be really feasible for those who had made peace with sexual desire, so it would be educational to see how sleeping posture would apply.

In the analysis of the Vinaya rule related to emission of semen we find the situation in which some bhikkhus would place their penis in between their thighs to make easier for nocturnal emissions to take place.
That could happen in any of the side sleeping postures.

On one occasion a monk, aiming at emission, pressed his penis between his thighs, and semen was emitted. … semen was not emitted. He became remorseful …
“There’s no offense entailing suspension, but there’s a serious offense.”

Is it just related to with the right-hand side being the dominant side for most people?

I think that in Ayurveda, lying on the right side is more conducive to calming. It also allows the left nostril to be more open, which, in yoga, is the nostril breathed through for calming. I know both Ayurveda and yoga have roots that reach back to the Buddha’s time and beyond. I wonder if there is any connection between the Buddha’s recommendation of lying on the right side and these Ayurvedic/yogic guidelines.

Not only Ayurveda but all fields of science suggest sleep is the best way of improving the growth of one’s self. Sleep is considered to be the physical tendency of a body at rest mostly in a straight motion. It is the best way to recover from one’s stress and strain. Most of the factors of the body, both physical and psychological are dependant on the individual’s sleep. The best time to sleep is in the nights apart from the small naps in the afternoon which can go upto 10 to 15 minutes. A human body requires at least 6 to 8 hours of sleep daily. Oversleeping also leads to many negative factors. According to Ayurveda the sleeping postures also counts a lot like sleeping on the right side is the most relaxing and good for yoga. On the left, it is most digestive and increases interest in food, sleep and sex.

Sleeping on the back indirectly and on the stomach directly encourages disease. Sleeping with crown of the head facing east and feet into the west promotes the best meditative sleep. It is good to have a wash before bedtime. There are suggestions which states eat light in the night and try to eat earlier. For those who have difficulty in sleeping Ayurveda recommends oil massage especially with aroma oils and also listening to pleasant music helps you to retire with peace. In Ayurveda there is different time which results in varying sleep patterns. From 6 to 10 in the evening Kapha dosha is predominant, which facilitates failing asleep. From 10 o’clock onwards is Pitta time, when mental experiences should be being processed during sleep. Ayurveda - Tripods of Ayurveda

So during my three full term pregnancies, I was told by midwives and in pregnancy books to lie on the left side so as not to put the baby’s weight on the placenta and reduce oxygen to the baby from lying flat on my back and right side. Also far more comfortable with a pillow to support the ever growing bump. These babies are now 31,20 and 15 !

Very nice photos!
They made me think of something: in sleeping outside, on the ground, sleeping on one’s back would be very cold, very unconfortable, and–especially, long-term–could be life-threatening. And curling the body to some degree would be a natural response to the elements in an effort to keep warm–as I think these “outdoorsmen” show. As far as right versus left, at least from my own experience, laying on the left side does hurt the heart after a while. And, if one slept with a wooden pillow (or some other such hard pillow), as the Buddha recommended, sleeping with either side of the head on the pillow is actually the most comfortable.

So I would say that laying on one’s right side, slightly curled, would actually be the most comfortable sleeping posture for a wandering mendicant.

Pillow or headrest? That’s a very interesting concept. Would you use these for the side of the skull (as pictured) or to support the neck? Are the various shapes for the skull or neck?

This nice old wooden headrest from the Tower of London might be particularly suitable for a maraṇānussati meditator. 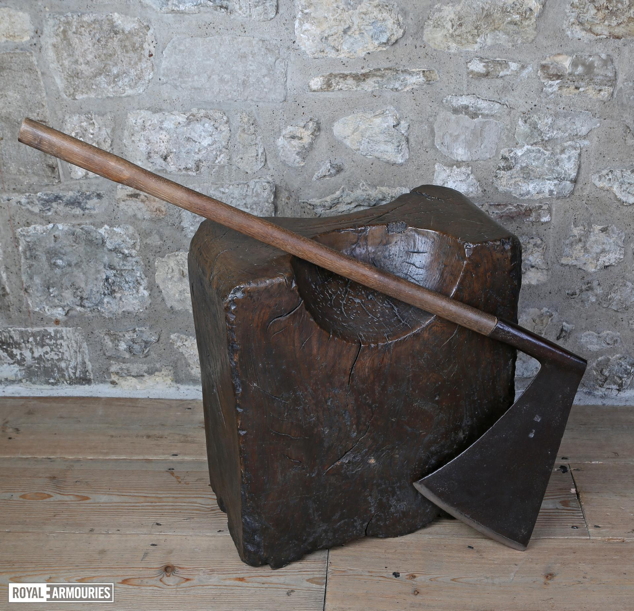 Reminds me of Ancient Egypt, he said as if he had been there. 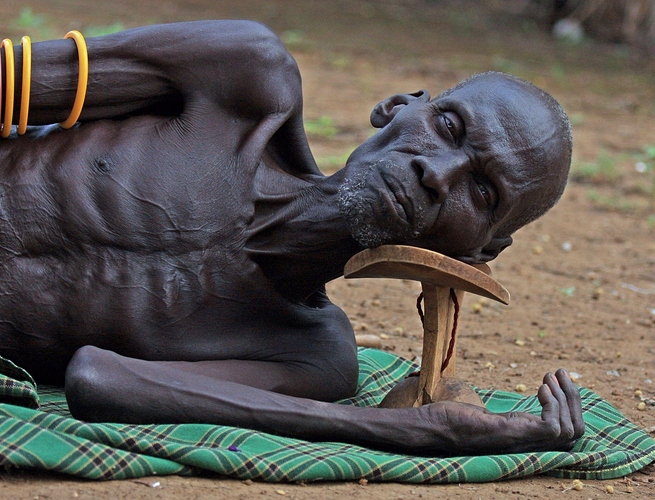 I will only remark that his neck looks to be in quite a crick, but who am I to know, perhaps he is quite comfortable.

And, if one slept with a wooden pillow (or some other such hard pillow), as the Buddha recommended

so i have heard. At one time the Buddha was staying near Vesālī, at the Great Wood, in the hall with the peaked roof. There the Buddha addressed the mendicants, “Mendicants!”

“Venerable sir,” they replied. The Buddha said this:

“Mendicants, these days the Licchavis live using wood blocks as pillows, and they exercise diligently and keenly. King Ajātasattu Vedehiputta of Magadha finds no vulnerability, he’s got no foothold. But in the future the Licchavis will become delicate, with soft and tender hands and feet. They’ll sleep on soft beds with down pillows until the sun comes up. King Ajātasattu Vedehiputta of Magadha will find a vulnerability, he’ll get his foothold.

These days the mendicants live using wood blocks as pillows, and they meditate diligently and keenly. Māra the Wicked finds no vulnerability, he’s got no foothold. But in the future the mendicants will become delicate, with soft and tender hands and feet. They’ll sleep on soft beds with down pillows until the sun comes up. Māra the Wicked will find a vulnerability and will get a foothold.

I hope this is only a legend. Yet I won’t be surprised if it were true.

His father believed, for example, that a warrior should sleep perfectly straight: “If he rolls around in bed like that, he’ll never make a true samurai. Set a sword blade on either side of his pillow.” Keiki learned fast. He also learned to sleep with his right arm beneath him so that, if attacked, he could still fight back with his good arm, even if he were to lose his left.

It may have something to do with keeping elaborate hair intact, as the Japanese Geishas also use something similar. Dukkha dukha dukha

His father believed, for example, that a warrior should sleep perfectly straight: “If he rolls around in bed like that, he’ll never make a true samurai.

By contrast, Clement of Alexandria seems to have taken quite a favourable view of rolling about in one’s sleep. In the chapter on sleep in his Pædagogus, a manual of good Christian living, he advises against down-feather beds not only on the grounds of excessive luxury but also because their softness impedes one’s rolling about, thereby depriving the sleeper of the benefits of a nocturnal workout:

For, besides the reproach of voluptuousness, sleeping on downy feathers is injurious, when our bodies fall down as into a yawning hollow, on account of the softness of the bedding.

For they are not convenient for sleepers turning in them, on account of the bed rising into a hill on either side of the body. Nor are they suitable for the digestion of the food, but rather for burning it up, and so destroying the nutriment. But stretching one’s self on even couches, affording a kind of natural gymnasium for sleep, contributes to the digestion of the food. And those that can roll on other beds, having this, as it were, for a natural gymnasium for sleep, digest food more easily, and render themselves fitter for emergencies.