Looking for guidance on ordination

Ever since I was a child, I have had an interest in going forth as a monastic, even before I had ever heard of Buddhism. After a childhood and adolescence witnessing much old age, sickness, and death I have spent most of my 20’s studying the Pali Canon, learning Pali, meditating, visiting monasteries, and living a simple life, alone with minimal possessions. I have found much peace and happiness in my practice.

Every day for the past seven years the thought of becoming a Bhikkhu has been on my mind. I am now a 28 year old man, healthy and debt free, and feel that the decision to go forth must be made sooner rather than later. I have not accrued much wealth throughout my life, and feel that there are two paths that I could take from here - either going forth as a Bhikkhu, or becoming much more involved in the world, losing some or most of my peace, and going to college, working, buying a house, saving for retirement, etc.

When I think about what I “want” to do, going forth sounds much better. I have little interest in all of the professional fields - I already spent 7 years working my childhood “dream job”, which I found to be very unsatisfactory. Spending my entire adult life working and saving for a house and retirement sounds unpleasant but reasonably within my grasp. The idea of living a virtuous, simple, and community-based life is much more appealing to me.

While I understand that life is uncertain, the idea of stepping into the Bhikkhu life in the modern era feels particularly uncertain. What if the monastery burns down? What if I don’t receive enough support? What if I get cancer at age 40 or need a root canal and the Sangha decides I’m not worthy of support? Spending the rest of my life as a lay practitioner feels like a significant compromise, but seems like the potentially more stable option.

While I have gone on many retreats to monasteries, I often feel like I just see the “lay person” side of things - I don’t really understand how things go “behind the scenes”. I am hoping that someone with a better grasp of modern Bhikkhu life could answer some of my questions.

Thank you to anyone who spent time reading this and can offer guidance. May you all be well.

Should you have any questions, feel free to contact the @moderators.

With Metta,
Alex
On behalf of the moderators

How well supported is the modern Bhikkhu?

Very well, for the most part. We live in extraordinarily wealthy times, materially speaking.

the care they need in times of sickness (particularly in America?)

I try to remember that even a handful of aspirin is better medicine than most kings of old had! And most countries / US states have some form of medicare for the poor and unemployed Bhikkhu.

Does one need to be a “super star” Bhikkhu in order to receive support?

Depends on what level. If you want to build a bunch of monasteries: yeah, that’ll require some charisma! But even the most unsympathetic monks get enough food to eat.

If you stay in the Ajahn Chah tradition especially, you’ll definitely be well supported.

I don’t have the opportunity to train under someone like Ajahn Chah.

Why not? Remember that such teachers are mostly mythologized after their passing. There are certainly teachers around today who will be remembered as fondly as Ajahn Chah.

How do monks fare after disrobing? It seems to me that spending 5, 10, or 20 years in a monastery would render one as an “unemployable nut job” to many employers.

Actually, from the monks I’ve seen disrobe here, it’s usually the opposite. Employers find former monks trustworthy and mature… but it’s the ex-monks themselves who usually find it hard to adjust to the pressure of wage slavery after experiencing the freedom of renunciation.

I think you would be fine in terms of support if you went Ajahn Chah & could die as a bhikkhu as long as you don’t disrobe.

the ex-monks themselves who usually find it hard to adjust to the pressure of wage slavery after experiencing the freedom of renunciation. 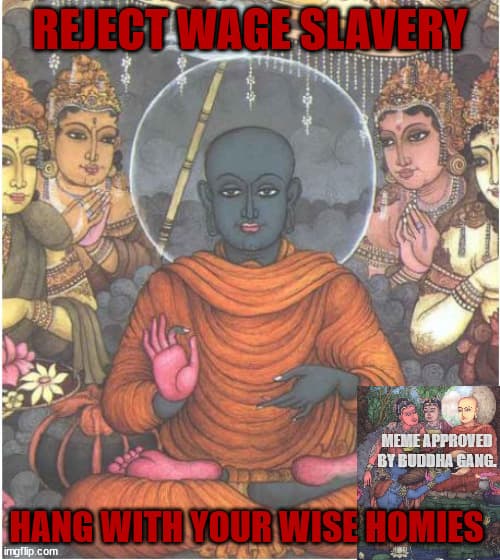 “Layman, I enlighten all sentient beings through skillful memes.”

“Be kind and smart and silly”