Other suggestions are welcome, too.

I’m afraid I have enough to do for SC and Samita, but when you have a site up, let me know so I can see if we can use the materials for SC.
I already tried getting copyrights from Asoka but that proved to be a dead-end street. There is no way I could get those translations from Breet, de Jan & Janssen. So at the moment we only have the translations as listed on the Dutch site: https://suttacentral.net/nl (most of them from Peter van Loosbroek).

Another suggestion: write a little article about what you are doing and place it on https://boeddhistischdagblad.nl/
Another thing: be careful with Dutch and Flemish people doing writing/proofreading: they never agree on the correct translation!!!

I’m afraid I won’t be able to lay my hands on more than you can.
I wouldn’t have expected you (or anyone) to get copyrights from Asoka.
Both you and I are too busy to deal with it right now, but maybe we can think and brainstorm about how we could get complete and uniform translations for the nikayas for the Dutch language.
I don’t know how you see it, but for me, having the scriptures in our native language is of paramount importance.

Thank you for the good suggestion about Boeddhistisch Dagblad!

About Dutch and Flemish people collaborating and writing/translation discussions: I’m from the province that is divided between the Netherlands and Belgium (living in the Dutch part of it) and my husband is Belgian, so I better take care myself to adhere to standard Dutch

We are working on a project here at SuttaCentral called Pootle. Bhante Sujato is translating all the suttas into English and this will be done inside Pootle, matched up with the pali original text. When he is finished, other people can use this system to do their own translations into other languages like Dutch fairly easily.

If they know Pali

Or English, or any other language this particular sutta has been translated in.

No, translations should be made straight from the source language.
No serious, professional translator would consider translating from a “bridge” language. As Wikipedia simply puts it: “The disadvantage of a pivot language is that each step of retranslation introduces possible mistakes and ambiguities”.

That being said, considering the above, of course I do have worries about the quality of the translations into the different languages that will be produced.

Forgive me if it is already mentioned elsewhere, but I think it would be a good idea to have at least a few basic safeguards in place to assure at least a very basic level of quality - though I am aware that such a thing might prove to be quite difficult in practice.

True, but it is very helpful to see how other translators have translated a certain word or phrase, also in another language.

Muslems, Christians can raise enough money to hire professional translators - we should be able too, being a world religion. Or at least we should be able to create a system that educates Buddhists, first of all teaching them Pali of course, but as importantly, teaches them at least basic translation skills. Knowing a language doesn’t mean you have the skills to be a translator.

It will take some time, but the great translations of Janssen and de Breet will be available online! I found this happy news here: 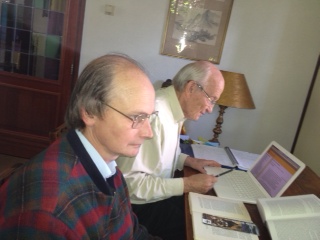