Four years ago I wrote about the kindness that America showed us here in Europe in WWII and thereafter.

It is the morning before the US elections. I put my morning cup of tea down on a sturdy wooden crate next to me. The printing on the side of the crate reads: W.B.R. Welfare Biscuits W.G.C & S (1929) L Packed 10/44 Net Weight 35 LBS This crate was parachuted out near the town of Gorinchem in the Netherlands at the end of the hungerwinter of 1945. It was found by a little boy, nearly 14 years old, who carried it home with his brother. His father had been arrested in September 1943, torture…

Here in the Ardennes around Tilorien Monastery the war is never far away. The scars in the landscape are now overgrown with beautiful forests. But still the bomb-craters are visible amongst the trees, memorials in every village. You come around a corner and run into an artillery gun or parts of a tank, now overgrown with vines, or an anti-tankwall still standing in a field with cows. 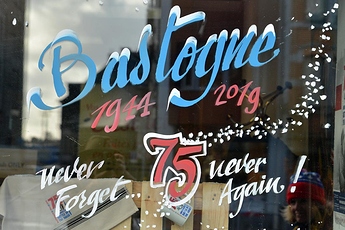 The words “Never forget, never again” are still written on shop windows. But it is so easy to forget, to create myths of heroism out of a devastating war. But when you walk over the endless cemetaries and read the names, and ages, of the countless boys who died here, you see that these were just children, sent to a useless death. And all that because both sides were afraid of the other … 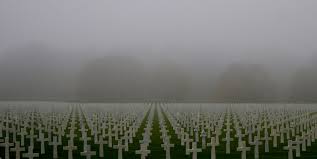 Four years have passed since I wrote this post. And we have come to the same point, now hopefully a little more wiser. The old crate, which once contained food supplies for the hungry people of the Netherlands and which was dumped from a bomber 75 years ago, is still sitting there with Dhamma books inside in Tilorien’s kitchen. I put my morning cup of tea on it and tears fill my eyes when I hear these words from Billie Eilish: “Sitting this one out is not an option. Vote as if your life, and the world, depend on it. Because it does.”

We here in Europe, and most of the world, don’t get to vote in your election. But our fate is in your hands today. So please vote. Vote for love, vote for connection, vote for unity, learn to connect and to embrace, no matter how scary it is. We all depend on it.

Such a beautiful post today, Ayya; thank you for this. I voted yesterday, likely the most important week of voting this country has seen, perhaps just as important as the vote that preceded the entry of the United States into the Second World War, a time when many Americans and one of the presidential candidates (W. Willkie) supported a platform of refusal to enter the War in Europe. Thankfully, FDR was elected, alliances formed with European and USSR allies, Hitler and Mussolini vanquished, all with my Sicilian ancestry grandfather (Ignacio Joseph Matacia Commander I. Joseph Matacia | Mt. Soledad Virtual Plaque ) part of the proud American Omaha Beach invasion at Normandy. That 1940 vote, interestingly, might have changed the future of the world had Willkie ( an isolationist) been elected.

It’s disappointing and peculiar to me that a country with the size and history of the US still elects a single individual that has the singular power of global influence, Congressional veto, and executive orders, such that one person can shape the destiny of a nation, for better or worse. For the last four years, we have been governed by a petty, damaged, mentally ill man who seemingly acts only for his own interests; some of those interests have involved self-dealing with Russia, China and other world competitors to protect his own failing Trump businesses, at the detriment to the country (and rejection of our positive UN relationships) as a whole. His rejection of science in favor of an ignorant and stupifying COVID approach has been surreal. The millions in this country that have supported this Ayn Randian, selfish, stupid “wear a mask?..no one tells me what to do!” approach has been a damaging embarrassment for the entire country.

I financially supported the Lincoln Project and other programs designed to advocate for progressive centrists to vote Biden/Harris this year. I am a Wisconsin resident, so this year, my vote counts. I certainly hope that November 4 of this year, unlike 4 years ago, to not wake up to a jaw dropping shock and deeply depressive day (worry for my kids, country and planet) , such as was suffered 4 years ago.

Dear @UpasakaMichael. I hear the fear, hurt and frustration behind your words as I have heard it from many other US friends. I’ve been trying for the last 10 minutes to write something here but words just fail me. My heart goes out to you all.

Americans are definitely voting this year. The United States Elections Project has already tallied nearly 100 million early votes so far, and a few states have surpassed the totals for 2016 before election day. It’s looking like, despite the pro-Trump commentary and incidents in the news, Americans have come to their senses. COVID gave us a really clear and concrete way to realize we need better leaders.

I always am reminded of this verse from the Therigatha

“‘Jiva, my daughter,’
you cry in the woods.
Come to your senses, Ubbiri.
84,000
all named Jiva
have been burned in that charnel ground.
For which of them do you grieve?”

Pulling out
— completely out —
the arrow so hard to see,
embedded in my heart,
he expelled from me
— overcome with grief —
the grief
over my daughter.

Today — with arrow removed,
without hunger, entirely
Unbound —
to the Buddha, Dhamma, & Sangha I go,
for refuge to
the Sage.

Our hopes and our fears today rest in the hands of our friends in the US. The choices that you make affect us all. Be full of love and peace and remember the best that you can be.

It’s 5:16 am where I live in Massachusetts. I’ve been up for an hour or so. I’ve been waking up every night. My family is trying to carry on in as normal as possible a way. But I feel like this country is on a precipice.

The pandemic is already too much. That we have to ride it out while a megalomaniac undermines basic decency at every turn is far too much.

One of the hardest things for me is that I know this situation has forced me away from progress on the path. Frankly, my heart and mind are filled with anger and sometimes, yes, hatred. My own larger family has suffered horrible rifts because of the few that feel compelled to support the tyrant.

I hug my kid and then I feel ok but I wonder what kind of future we’re handing her.

Today I’m reminded of a phrase Chris Hadfield, the Canadian astronaut, uses to describe orbiting the Earth on the space station and looking down on all of humanity on the planet below.

“We’re all buddy breathing off the same oxygen tank.”

May we all be free of hatred, anger, and fear. May we choose with loving kindness and compassion.