I’m happy to implement this when I’m back next month.

Good idea. What about the lookups, too? I often activate the chinese lookup, then go to another Chinese sutta, and activate it again. It would make sense that these things are activated “globally” until you decide to turn them off.

On staging.suttacentral.net I have made the Textual Information sticky so please have a look and find fault …

The lookups work a bit different so I have to take some time to study it.

Works great. no fault to find!

OK. Try the Chinese to English lookup on staging … (not done the Pali to Language one yet).

@Blake: can you please have a look at these commits too … I might not have the best way of doing this through localStorage. Just to summarize: I have made Textual Info and Chinese to English lookup sticky and this is on the Newdata branch and active on staging.

And if everybody is happy with this, can I move this to Master?

If you and Blake are happy, i’m happy.

The way you are doing it is right.

Done that.
But I noticed that you moved the content of the template sidebar.html to text.html in the newdata branch, while on master it is still in sidebar.html. I have made changes now in master in sidebar.html so something to watch out for when you want to merge the two branches.

@Sujato and @Blake, I did not hear anything any more so I have made some changes to the handling of the textual info stickiness in Master. Now it stays there (with Textual Images visible) so no need to click on it twice again each time you start up.

I found some time for the next and final step of this project:
I’ve also made the pali lookup tool sticky on staging so please go and find fault with this.

did you remove the Chinese lookup tool? it’s absent on both staging and master

did you remove the Chinese lookup tool?

It’s working fine here, it must be a problem at your end. 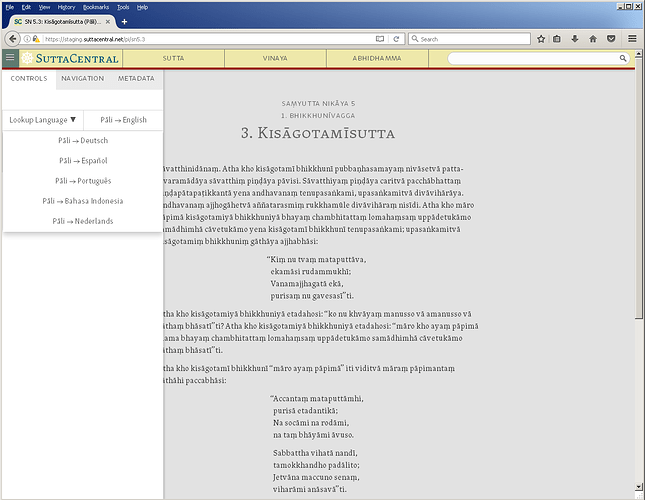 I see what you are on about now

If there are no objections, I will put the “stickiness” of the Pali to languages lookup tool on Master today. So then you also have the Pali to Chinese one there.

true i should have been more descriptive so apology for deception

No worries, happens to me all the time.
I tried putting it on Master but something went wrong … I will look at it on Monday.

Best way to make sure it is not a problem on your side is force the browser to refresh, using Ctrl+F5. Also I strongly suggest cleaning up cache using something like CCleaner.

OK. This is done now on Master also so I can close this issue.