Could anybody suggest some books where the concept of Atammayata is well explained? Thank you

Hello, if you search the term on the website http://www.accesstoinsight.org/
you will find a few useful references, including passages from The Wings to Awakening by Bhikkhu Thanissaro where he comments on the term. His English rendering of the term as non-fashioning, though, may not be accepted by all translators or scholars.

In the late 80s and early 90s, until his health deteriorated too much, Ajahn Buddhadāsa gave regular lectures during the international retreats held at Suan Mokkh and then Suan Mokkh International Dharma Hermitage. As these were given at the end of...


Here is the link to a famous talk by ajahn Buddhadasa.

Both readings have been useful to me. With metta

Atammayatā is a fairly simple word. Even though it’s used rarely, the etymology and contexts make the meaning clear.

So literally it is “not-made-of-that-ness”. More sensibly, “non-identification”. It is one of the many terms used in the texts to refer to “not-self”.

To understand this, consider the two main dimensions of not-self. A stream-enterer has let go of sakkāyadiṭṭhi, “identity view”. This is where we identify ourselves with something, and have an idea or view that that is us. It may be something physical, our body, for example.

A stream-enterer has seen through this and they no longer believe that they have a self that can be identified with anything. But they still have a residual sense of self in a general way. This is called māna, or conceit. Only an arahant has let go of conceit completely. So even though a stream-enterer knows that nothing is their self, they still sometimes unreflectively act or think as if they did have a self.

This can be compared to a phantom limb. Even though you know you have lost an arm, sometimes you forget, and speak or think or act as if it was still there.

The term atammayatā is simply another way of expressing this distinction. It refers to the more basic attachment to self, equivalent or similar to sakkāyadiṭṭhi or eso hamasmi, the identification with a specific thing (tan). In other words, the self is “not made of that” specific thing.

Thus in the few contexts where we find it, it is explicitly identified with not-self (especially AN 6.104), and is treated as the non-identification with specific things, most often with stages of meditation (MN 113 and MN 137).

This can be compared to a phantom limb. Even though you know you have lost an arm, sometimes you forget, and speak or think or act as if it was still there.

Venerable, this is a remarkable simile on anatta and the continued sense of self. I observed that some of your posts/replies here on the forum deserve saving [and I’ve been here only a short time!]: cumulatively they will make up a good publication.

I found ‘Food for Awakening’ by Thanissaro Bhikkhu quite descriptive as well:

Not Made of That

In the Theravada tradition, we’re familiar with the three characteristics of existence—anicca, dukkha, anatta (impermanence, unsatisfactoriness, selflessness). These are “chapter-one, page-one” Buddhism. But the Theravadans also talk about three other characteristics of existence, at a more refined level: suññata, tathata, and atammayata. Suññata is emptiness, which is talked about a lot. That expression, suññata, derives from saying “NO” to the phenomenal world. It’s like saying, “I’m not going to believe in this.This is not entirely real.”

Tathata means suchness. It has a very similar quality to suññata but derives from a “YES.” There is nothing, yet there is something. The quality of suchness is like the texture of Ultimate Reality. Suññata and tathata —emptiness and suchness—the Teachings talk in those ways. But this other quality, atammayata, is little known.

In Theravada, atammayata has been referred to as the ultimate concept. It literally means “not made of that” but it can be rendered in many different ways, giving it a variety of subtle shades of meaning. Bhikkhu Bodhi and Bhikkhu Ñanamoli (in their translation of the MAJJHIMA NIKAYA) render it as “non-identification”—picking up on the “subject” side of the equation. Others have translated it as “non-fashioning” or “unconcoctability”—thus pointing more to the “object” element of it. Either way, it refers primarily to the quality of Awareness prior to, or without, a subject/object duality.

The origins of this term seem to lie in a theory of sense perception of ancient India, in which the grasping hand supplies the dominant analogy. The hand takes the shape of what it apprehends. The process of vision is explained as the eye sending out some kind of ray which then takes the shape of what we see and comes back with it. Similarly with thought: mental energy conforms to its object (e.g. a thought) and then returns to the subject. This idea is encapsulated in the term tanmayata, “consisting of that:” the mental energy of the experiencer becoming consubstantial with the thing being realized.

The opposite quality, atammayata, refers to a state where the mind’s energy does not “go out” to the object and occupy it. It neither makes an objective “thing” nor a subjective “observer” knowing it. Hence “non-identification” refers to the subjective aspect, and “nonfabrication” to the objective.
The way emptiness has been talked about during this retreat has made it very clear that this is a characteristic of Ultimate Reality. But also, when we talk about emptiness or about suchness, in that usage of those words there can still be a sense of an agent (a subject) which is a this looking at a that and the that is empty. Or the that is such, thus. What the word atammayata is attempting to convey is an ending of “that- ness”—a complete abandonment of the idea that there can be anything other than Mind Essence. Atammayata is the realization that, in truth, there cannot be anything other than Ultimate Reality. There is no that. In letting go of that, then the whole relative subject/object world, even at its subtlest level, is dissolved. It is broken apart.

I particularly like this word because of the message it conveys. It may seem very obscure, but sometimes the most abstruse and subtle tools can bring about the most radical changes of heart. Among its other qualities, this concept deeply addresses that sense of always wondering:“What is that over there?” That hint that something over there might be a little more interesting, a little bit more real than what is here. Even the sub- tlest sense of overlooking this to get to that, not being content with this and wanting to become that, is an error. Atammayata is that quality in us which knows,“There is no that.There is only this.” Thereby even “this- ness” becomes meaningless. Atammayata helps us to break the subtlest habits of restlessness as well as stilling the reverberations of the root dual- ity of subject and object. That abandonment brings the heart to a real- ization of a complete spaciousness and fulfillment, a wholeness. The apparent dualities of this and that, subject and object, are known as essentially meaningless.

One way that we can use this on a practical level is a technique that Ajahn Sumedho has often suggested. Thinking the mind is in the body, we say, “my mind” [points to head] or “my mind” [points to chest], right? “It’s all in my mind.” Actually we’ve got it the wrong way round, because our body is in our mind, right? What do we know about our body? We can see it. We can hear it. We can smell it. We can touch it.

We may also use the word cessation, nirodha, here. Along with its more familiar rendition, the word also means “to hold in check,” so it can mean that the separateness has ceased. When we realize that we hold the whole world within us, its otherness has been checked, has ended. We are thus better able to recognize its true nature.

This is an interesting little meditation tool that we can use anytime. It is a very useful device because it is true. Whenever we apply it, it flips the world inside out because we are able to see that this body is a set of perceptions. The world is a set of perceptions. It doesn’t negate our func- tioning freely within it, but it puts it all into context: “It’s all happening within the space of Rigpa. It’s all happening within the space of the Knowing mind.” In holding it in this way, we suddenly find our body, the mind, and the world all arrive at a resolution—a strange realization of perfection. It all happens here.

A side note about my interest: it’s in fact after reading this that I went searching and found this post!

Many thanks @sujato for mentioning the instances where the word is mentioned. I find this section of Ajahn Amaro’s essay absolutely fascinating, and deep in meaning, (sign perhaps: maybe I am reading too much into it! maybe not!) Related inquiry is currently looking around the The Suññata Vagga of the Majjhimanikaya MN121

I welcome any interesting pointers or tidbits you feel I might find interesting.

I’m curious about its mentions in EBT but also what role it’s played historically in Theravada and if its in the commentaries, it should be noted that this talk was given by Ajahn Amaro in the context of a dzogchen retreat with practitioners in the 90’s and then published as this book.

The Island, by Bhikkhus Pasanno and Amaro deal with the subject in Chapter Six: “Atammayatā: ‘Not Made of That’”–https://www.abhayagiri.org/media/books/pasanno_amaro_the_island.pdf

Caution should be exercised regarding premature abandonment and skills in building the raft of dhamma need to be developed first:

"This is the sense in which even the path of right practice must eventually be abandoned, but only after it has been brought to the culmination of its development.

Many people have misunderstood this point, believing that the Buddha’s teachings on non-attachment require that one relinquish one’s attachment to the path of practice as quickly as possible. Actually, to make a show of abandoning the path before it is fully developed is to abort the entire practice. As one teacher has put it, a person climbing up to a roof by means of a ladder can let go of the ladder only when safely on the roof. In terms of the famous raft simile [§§113-114], one abandons the raft only after crossing the flood. If one were to abandon it in mid-flood, to make a show of going spontaneously with the flow of the flood’s many currents, one could drown.

When the factors of the path are mutually brought to a state of consummation, however, there occurs a point of equipoise called “non-fashioning” (atammayata) [§179], in which their contact with consciousness — still fully conscious — naturally becomes disengaged."—Thanissaro

A reconstruction of the raft on which an Australian Buddhist made the hazardous crossing to Asia: 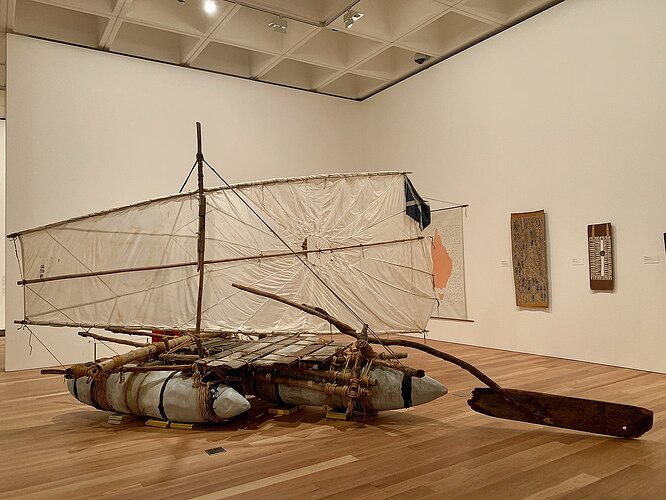 Pardon bhante… it seems that atammaya has the opposite meaning of Papancasannasankha, instead it is seen as having a resemblance to Sakkhayaditthi. Atammaya is a non-proliferative view of reality.