(1) Re: the first photo. So, the reason the Buddha does not accept the milk rice is that Kasi Bhāradvāja chanted over it, right? Do you know why that kind of food won’t be digested? I mean, why would such food sizzle and steam?

I don’t know if I am confused because of my poor English. I would greatly appreciate your help. 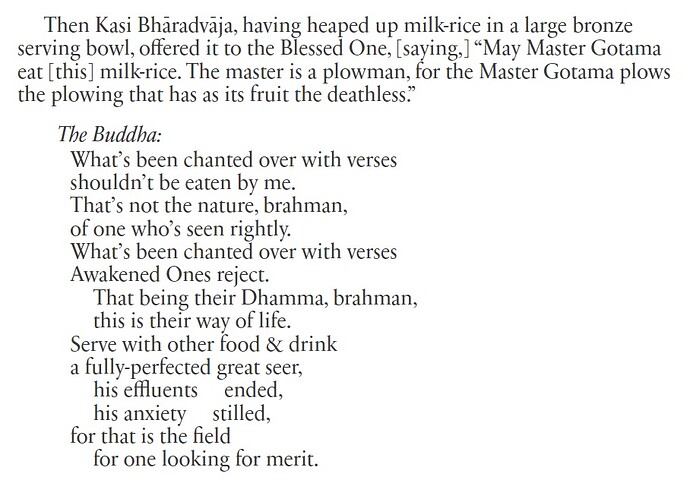 Welcome to the D&D forum! Enjoy the multiple resources here available: may these be of assistance along the path. Should you have any questions about the forum, feel free to contact the @moderators.

Liz
On behalf of the moderators

The first thing to know is that there is a literary device (if that’s the word) going on here.

The Buddha and his arahant disciples are the true brahmins; they have the true veda, i.e. knowledge; they are the truly spiritually powerful ones. This is opposed to the literal brahmanical caste by birth.

So, that in mind, the Buddha is rejecting the milk rice that has been chanted over. In doing so, he is rejecting the brahminical ritual and magical encantations (and thus, in a way, the Brahminical religion and authority of the brahmins altogether, as he often does). The sutta is not denying that these spells work; in fact, a central aspect of the story (as I explain below) is that the milk rice is truly ‘powerful’ in a sense
What is rejected is the superior power of the chants, the allure and prestige of such a Brahminical offering, and the necessity for the Buddha to accept a gift as something valuable for it being Brahminical. When the Buddha rejects the powerful milk rice, he rejects the need for any Brahminical validation and the desire for such objects that would otherwise be extremely special. A normal person would find it a rare honor; the Buddha doesn’t want anything to do with it.

However, because the Buddha and his arahant disciples are the true brahmins and spiritually powerful, there is nobody else who could actually digest such powerful food, not even the brahmins themselves (to whom the arahants are superior)—again, at least symbolically. The Buddha is beyond it and rejects all of its allure, and yet, he is the only one who can eat it because of his spiritual power as an arahant. So, he tells the brahmin to dispose of it. The sizzling of the rice is representative of its magical power.

Hope that helps. It’s a powerful story packed with lots of meaning and deeper messages that recur in the canon!
Mettā

Bhante @sujato wrote an interesting analysis of this sutta just recently which you might be interested in reading.

With the fourth Sutta, we see a return to a brahmanical context, but this time in a more conventional way. The Kasibhāradvājasutta ([snp1.4]), which is found also in the Saṁyutta ([sn7.1]) with a shorter narrative portion, tells us of a brahmin who works as a farmer. To celebrate the sowing season, he distributes food for anyone who comes. The events unfold in the Southern Hills, an outlying district rarely visited by the Buddha and his Sangha ([pli-tv-kd1:53.1.3]; see the discussion on the quo…

Do you know why that kind of food won’t be digested?

The commentary offers two alternative explanations, one long and one short. The long one says that it’s because of devas infusing the food with celestial ojā:

But why is it that no one in all the world including the devas could properly digest it? Because the coarse food had been infused with subtle nutritive essence. For as soon as it was said that this milk rice was intended for the Blessed One, deities infused it with nutritive essence, as was done with the milk rice offered by Sujātā (Ja I 68), with the dish “boar’s delight” prepared by Cunda (DN II 127), with each lump of food received by the Blessed One at Verañjā (see Vin III,6–7), and with the remaining sugarballs in Kaccāyana’s pot of sugarballs in the Chapter on Medicines (Vin I 225).

Since the subtle nutritive essence had been infused into coarse food, the devas could not digest it; for devas have subtle bodies and they cannot properly digest the coarse food of human beings.

Humans, too, could not digest it; for human beings have coarse bodies and they cannot properly digest the subtle celestial nutritive essence.

But the Tathāgata could digest it and properly assimilate it with his natural digestive power. Some say: “through his bodily power and the might of his power of knowledge.”

A disciple of the Tathāgata who is an arahant could digest it through the power of concentration and through his moderation. But others, even those with psychic potency, could not digest it.
(tr. Bhikkhu Bodhi)

The short one says don’t even think about it:

Or the reason for this is inconceivable; this is the domain of the Buddhas.
(Ibid.)

The commentator is alluding to the Acinteyyasutta, in which the “domain of a Buddha” is given as one of the four things not to be thought about.

I mean, why would such food sizzle and steam?

The commentary says that the Buddha made it do so:

Sizzled and hissed and gave off steam and smoke: Why did this occur? Because of the spiritual might of the Blessed One, not on account of the water, the milk rice, or the brahmin, or others such as devas and yakkhas. For the Blessed One had resolved on such an occurrence in order to arouse in the brahmin a sense of urgency for the Dhamma.
(Ibid.)

(1) Re: the first photo. So, the reason the Buddha does not accept the milk rice is that Kasi Bhāradvāja chanted over it, right? Do you know why that kind of food won’t be digested? I mean, why would such food sizzle and steam?

This is how I understand this:

This is another, quite delightful, potential explanation! Thanks

Just so you know, it’s easy to paste in material and have it appear as quotes (like some in this thread have done). Doing this makes the forum more searchable and a bit easier for people on mobile. You can just wrap it in quote tags…

You can also do that by putting > at the start of each line:

But if you pasted because getting Ven. Thanissaro’s verses to appear with the correct formatting, then welcome to the club! It’s such a hard thing to deal with that pasting makes sense if you need to keep it.

Wow! What a blessing I have to have found out this website! I cannot thank enough for all of you including Bhante Sujato.

Oh my goodness!!! It IS packed with so many interesting layers. Initially I thought ‘It might not be too important to my practice anyway’, but I am so glad I that I did ask here. Thank you so very much! I will remember all the help I get from people like you and try to ‘repay’ indirectly to someone else - in case I have nothing to help you with. Please be well, and I hope you make lots of progress in your practice.

Thank you very much! I am overwhelmed by gratitude.

Dear Bhante, I never even imagined that there would be such rich stories going on behind this. I cannot thank you enough for for your kindness to take your time and effort to give me such a detailed explanation. Deep gratitude for teaching me.

Thank you for letting me know! I am new to this website and not tech-savvy anyway.

But I will try next time. Sounds like a very useful method.

You are welcome. Just a few more tips…

When you are writing a post, you can minimize your draft and then go back to the thread, highlight something you want to quote and then hit the “quote” button that pops up. This will put the quote into your draft. That way you can put several responses into one post. Everyone you quote will be alerted.

You can also direct a response to someone by doing this: @Heesoo. Then they will be alerted.

And if you want you can (for a day or so) go back and edit your post if you like.