I have found a book titled Mastering the Core Teachings of the Buddha: An Unusually Hardcore Dharma Book which the author, a Western Buddhist meditation practitioner I think, claimed as an Arahant. 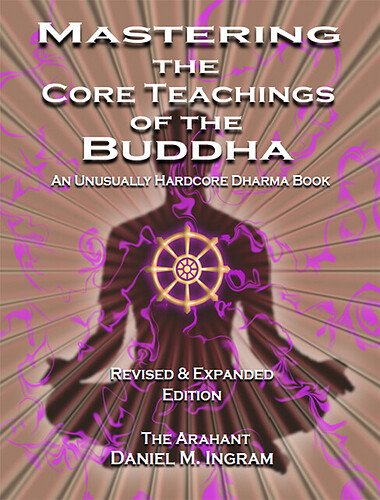 I just read a few of it at a glance. He wrote about method of meditation to attain enlightenment (which is based on Mahasi Sayadaw vipassana method), criticized Theravadin’s 4 stages of enlightenment (Sotapanna up to Arahant) and Mahayanist’s 10 stages of Bodhisattva, but preferred Vajrayana’s 5 stage of enlightenment, and narrated his journey to Arahanthood. Among other things, he also criticized the concept of an enlightened being in Theravada (which defined an Arahant cannot do this and that, as well as he/she should be ordained in 7 days after attaining Arahanthood).

Here is the PDF version of the book: https://daniel-ingram-c4x6.squarespace.com/s/MCTB2-Complete-PDF-Final-copy.pdf

What do yo think? While nowadays Theravadins consider it’s not possible to attain Arahanthood in modern secular age, how about this claim? Thank you.

Possibly true for some, but largely incorrect. It’s considered difficult but not impossible these days.

What do yo think?

This forum has already discussed Dr. Ingram at length in this thread

The mere fact that he criticizes suggests that he is far from being an Arahant.
With Metta

Given that it’s almost consensus this individual is at best a controversial figure, further noise could be avoided by closure or removal of this topic by @moderators.

The fact the referenced material characterises a clear example of parajika offense - i.e. claiming of supermundane attainments - should be more that enough to justify immediate and bold action.

@seniya , just to be clear, I am not accusing you of anything but flagging to moderators that trouble is highly likely to follow what you brought us here.

Thank you for your caution, @Gabriel_L. I didn’t know that this controversial figure is discussed in other topic linked by Bhante @Khemarato.bhikkhu above. For others, I should warn to read this book with caution and should also read the article by Bhante Analayo in the other topic which has good points from traditional Theravada view.

Everybody have the same possibilities to became an Ariya.
But, an Ariya never claimed he/she is an Ariya.
Except, he/she trapped inside his/her own delusion.

Hmm, nothing new here. In light of this book, I’d recommend this one https://www.amazon.com/Halfway-Up-Mountains-Premature-Enlightenment/dp/0934252912

The fact the referenced material characterises a clear example of parajika offense - i.e. claiming of supermundane attainments - should be more that enough to justify immediate and bold action

If not mistaken the parajika offense applies to the monastics only whereas lay peoples not in the picture . Many would admires sumedho as arahant but nobody knows for sure !

If not mistaken the parajika offense applies to the monastics only whereas lay peoples not in the picture .

Also, to clarify even more, the parajika is for knowingly, falsely claiming a spiritual attainment. To reveal an attainment that one honestly believes one has to a lay person is a pacittiya.

This book and its author has been discussed at various times on the Forum @seniya. Here is a list of search results for you to peruse. If you don’t understand the concerns that people on this Forum have you might go straight to this article:

For those interested in how discussion between Ingram and Analayo went, I repost from DhO: EDIT: the forum post from which this link comes: