Please include the other neighboring communities in your thoughts as well

Two other Buddhist communities in neighbouring areas are also affected by the fires - Sunnataram Monastery (monks and peacocks safely evacuated) and Vejjasala Retreat Centre, run by the Association of Engaged Buddhists. (Also empty at this time)

A short article on just how uncertain the situation is:

The monks at Sunnataram Forest Monastery have no idea if their home is still standing.

So many living beings have been affected by these fires. Metta to all!

Good point. I’ve been keeping Suññataram in mind as well (but don’t know the location of the other centre).

Glad to hear the Suññataram peacocks are safe.

Thanks for the link to the other thread, I somehow had overlooked it.

The Morton Fire (a branch from the larger Currowan Fire) which hit the eastern part of Bundanoon and was bearing down on Santi & Suññataram, “has eased” for now, according to the latest update.

The Digital Earth hotspots map, if it can be taken as very precise, suggests that Santi is narrowly spared. But Suññataram may have been surrounded by fire. On this screenshot I’ve marked Santi with a blue smudge and Suññataram with a lavender one.

Santi is safe for the moment. Please see this post:

SANTI IS SAFE That’s the latest news from Ayya Jitindriya and Ayya Jayasara from Santi Monastery—who joined me for pindapata today in Sydney. This news came after the update they posted late on the Santi website last night: https://santifm.org/santi/2020/01/05/update-on-fires-in-bundanoon-and-santi/ They are heartened by all the concern from all those people who have been posting here and elsewhere and asked me to thank you all for keeping Santi in your thoughts. The situation in the Bundan…

Not sure about the other centres yet. Wingello, where Vejjasala is has been devastated by the fires, losing around 10 homes and businesses on the main street.

I’m going to merge the threads for Fires and affected Monasteries, as it is just getting too confusing, to keep track of the changes and to have all comments in one place instead of having to ‘multiple post’ I know it’s not a perfect solution, but I hope it is a bit better than 3 con-current threads

May all fires be extinguished and all beings know the extinguishment of dukkha!

Please be aware that the NSW RFS maps shade in grey all the areas that have been burned during this entire fire season, which has been going on for weeks. To work out where the fires are active it is necessary to to go to their website, https://www.rfs.nsw.gov.au, and check the details. Red, yellow and blue are the colours to be concerned about.

The details are only the best they can give, not always precise. The service is overstretched and the volunteers must be exhausted.

May the fire on the edge of Santi Monastery stay down in the gulley. May it not climb the hill. … May all fires be extinguished and all beings know the extinguishment of dukkha!

Wonderful to hear Santi is safe for now. If you read the reports of what happened that night, a firestorm that wiped out a large part of Wingallo and Penrose and left people running for their lives, it is a miracle that the two monasteries were spared. In fact, the fire left a large gap just where the monasteries are and then attacked north Bundanoon and Exeter on the other side. The fire came right up to the SE boundary of Santi FM in Coal Creek but stopped there.

'We realised we can't stop this': locals flee Wingello fires inferno that...

Residents of sleepy southern highlands town recall a roaring wind, like a freight train, then seeing red sky and embers raining down

'There is a large bushfire coming up the escarpment,' the southern highlands zone commander warns, ordering the immediate evacuation of two streets

Our good friends at Sakyaditha Australia Association of Buddhist Women have launched a fundraising campaign to benefit a variety of organisations in the aftermath of the Australian bushfires.

There’s a lot of other campaigns going around at the moment, so if you’ve been thinking about donating but are unsure of who to support or which fundraisers are legitimate, then this could be an opportunity for you! 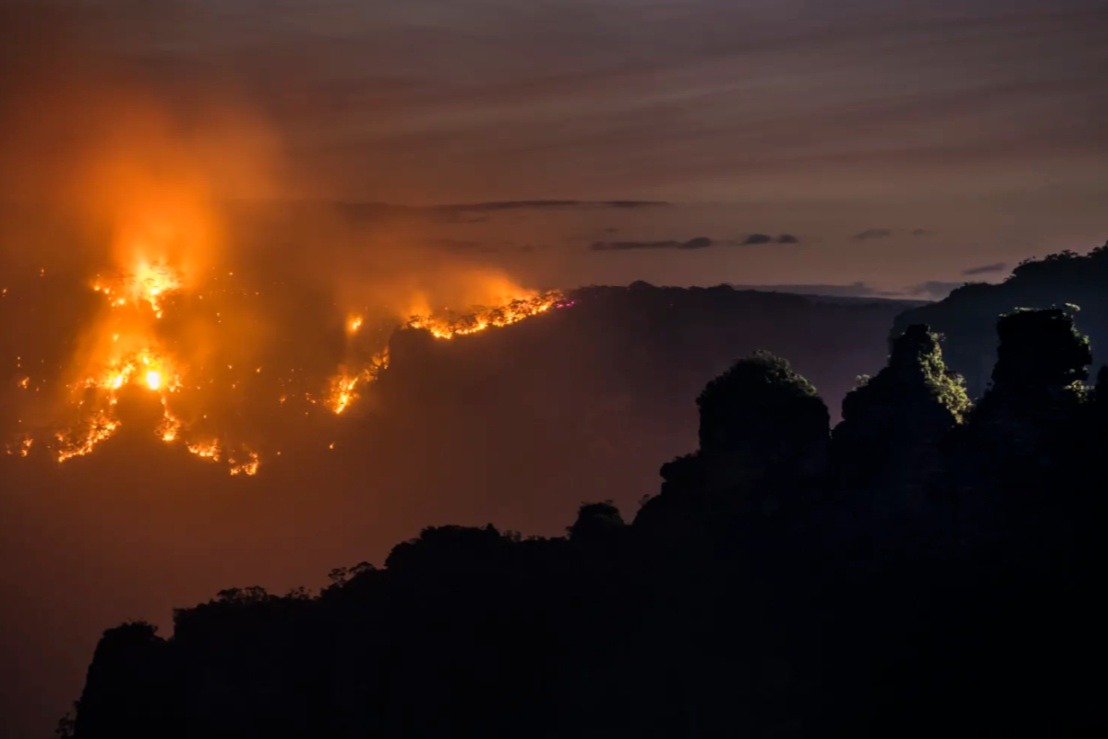 It was at this same time of the year, five years ago, when I took this picture at Santi and made some postcards of it. Back then we had thunderstorms and rain almost every day.

Whether these trees will survive or not—may the path to peace taught by the Buddha never be forgotten in all these disasters which are in fact heartbreaking!

Dear Ayya, is it possible to change the link to the video in your post such that it does not automatically start whenever I enter this thread and scroll down to the end? It is very quiet in my rooms but my loudspeakers are active because I often like to listen to classical music via my laptop and don’t like it when I myself (or my neighbours) get surprised and attacked by that voice ot the officer…

Update from Vejjasala Retreat Centre with a bit about Sunnataram Monastery

The situation at Vejjasala is as follows…
Zach went onto our property and found that the main building is undamaged as far as he could tell.
The large Water Tank is Undamaged
Our powerline is undamaged but of course there is no power in Wingello at present
The Kutis appear to be ok with the exception of the Bush Kuti nelow the main house and in the bush which he thinks is burnt out.
The building we call the cottage (sleeps 6 - 8) beside the Machine shed has burned (I think completely…but it was very hard to hear what Zach was saying as reception there is very poor)
The Machine Shed is fine
Water Tanks behind the Machine shed appear to be fine
Kutis in top field are ok I think
The area where the pine forest was has been burnt completely (which is good for us really and lucky that we removed it or much more may have burned)
All trees around us and on the property have been burned and are very dangerous at present.
You cannot access our driveway at all because of fallen trees.
Forest Road is very dangerous, again because of fallen trees and the danger of more trees falling down at any time.
The RFS and others are trying to clear the Forest road with heavy earth moving equipment making access very difficult.
Unless you are a resident you are not permitted yet into Forest road
There is serious damage along Railway Parade (around the area where the shop is) and cleaning up is in progress
The fire seems to have roared up through Forest road to the main road near the Railway station

His advice is to stay away for a few more days until they get the road cleared and even then when walking around our property to exercise extreme caution because tree can fall down at any time.
Also some trees on the road are still smoking
So that is about all I can tell you for now.

Please do not go near the place just yet.
David our architect will go down to inspect damage later in the week and he has contacted the Wingecarribee Shire Council on our behalf, Thank you to David and to Zach for his great help.

So we have been lucky if Zach’s report is accurate.

When I hear more I will let you know

with much metta and gratitude

The NASA Worldview app provides a satellite's perspective of the planet as it looks today and as it has in the past through daily satellite images. Worldview is part of NASA’s Earth Observing System Data and Information System. EOSDIS makes the...

This is a relief to hear. The forest monasteries have been quite lucky this fire season, having survived the worst (so far): Wat Buddha Dhamma, Vejjasala, Santi and Sunnataram. I suppose they will have to think about how best to deal with what will be an increasingly reoccurring event in future

These are wondeful news, thank you all

Lets not stop meditating for protection until the situation is perfectly safe.

I personally don’t think it was a coincidence, I believe in power of kamma and directed metta.

May all fires be extinguished and all beings know the extinguishment of dukkha!

And lets hope these monasteries will keep helping in this endevour of making beings realise extinguishment of dukkha, without being troubled by fire threats anymore.

Thanks @Vimala for posting these two articles; they deepen even more my respect for the firefighters and for the miracle that appears to have spared Santi & probably most of Suññataram.

Quote from We Realized We Can’t Stop This,

What firefighters had feared for days had come to pass. Once the fire jumped the river, it grabbed hold in the dramatic and dense bushland of Moreton [sic Morton] national park.
It lit up forests to Wingello’s [and Bundanoon’s] south, creating a new bushfire that tore northwards, out-of-control, flamed by strong winds.

“When the southerly [wind] hit, that’s when things really got interesting. It formed pyro clouds…That means only one thing – the fires are moving quickly and burning profusely… It took a run of about 12km [7 ½ miles] in two hours, which is just ridiculous. We have seen it [up north] before this season…but we never thought for a second we’d experience it down here.”

The fire split into two flanks, one to the north hitting Bundanoon and Exeter, and a southern point smashing Wingello, roaring through the state forest with “amazing speed”…

This extraordinary firestorm, of an intensity byond anything the head of the local Rural Fire Service ever expected to happen, “split into two flanks” - as it went around the monasteries. A firestorm so intense it created pyroclastic clouds, moving straight towards the monasteries at high speed, inexplicably paused and split, veering to the right and to the far left of Santi Forest Monastery like a river parting around a large rock.

I attribute this miracle to the presence of the monasteries, to the protective devas, and to well-wishing coming from around the world.

The firestorm’s split also spared most of Bundanoon from harm. It is fortunate to have a monastery nearby.

Seeing the fire maps change configuration a few times over the last couple of days has been interesting! …

If there is a way to donate to these monasteries, please let us know!

If there is a way to donate to these monasteries, please let us know!

For the nuns monastery, Santi:
https://santifm.org/santi/donations/donate-on-line-here/

My past observations suggest that monks often receive donations at a rate of 10 to one over nuns. It’s really helpful to support the Santi nuns right now, when their expenses remain the same or more yet their regular supporters may be focused on donating instead to urgent fire-related causes.