Study of early Buddhism is hampered by the paucity of archaeological remnants from the era. This is partly due to the nature of the culture at the time, with buildings mainly in wood, and monumental and brick architecture coming later; and also because of the generally poor state of archaeology in India. Nevertheless, we do have some evidence. the culture of the time is known as the Northern Black Polished Ware Culture, named after the distinctive shiny, glazed pottery (NBPW). The timing and geographical distribution of NBPW is very similar to the cultural sphere as depicted in the EBTs, and there is no doubt that the culture described in the suttas is, in fact, Northern Black Polished Ware Culture. 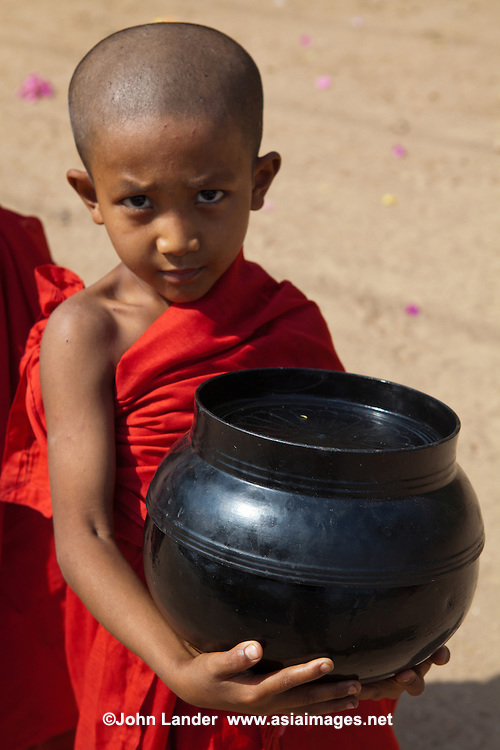 This said, it is curious that it’s not easy to find a direct description of this pottery in the EBTs. Archaeology is a tricky science, however, and what has survived is only a fraction of what was present in the culture; what was important for them may have been quite different from what the archaeologists have found. After all, one of the most lasting cultural artifacts of our time will, in all likelihood, be the collected works of L Ron Hubbarad, preserved on stainless steel plates in titanium capsules, buried in vaults in the New Mexico desert, and marked for recovery by alien vistors. It is a disturbing thought, but you have to admit, it would be fun to see the alien archaeologists of the future trying to reconstruct our society from that!

It occurred to me some time ago that the mendicant’s bowl, which we use to collect alms and to eat from, was likely to have been NBPW, and in this way the glossy black bowls we see today are likely to be a direct cultural continuation.

The Vinaya says that a bowl may be made from either clay or iron, but doesn’t give much more detail than that. These days, of course, almost all bowls are of iron or stainless steel, though clay bowls are occasionally used.

But it seems I was rash to assume that these were NBPW. There’s a delightful passage in SN 21.8:

Then Venerable Nanda, the Buddha’s cousin on his mother’s side, dressed in nicely pressed and ironed robes, applied eyeshadow, took an accha bowl and went to the Buddha.

I haven’t translated accha, because I think this refers to NBPW. The word has the basic meaning of “shining, clear, transparent”, like pure water. It is therefore an excellent description of the glossy black glaze found on NBPW, a refined and beautiful surface that would have been greatly coveted.

Obviously in this passage Nanda is dolling himself up in a way that isn’t appropriate for monks. This suggests that a highly polished bowl was considered as inappropriate as ironed robes and makeup.

As it turns out, this agrees exactly with the archaeologists’ opinions about NBPW. There’s an excellent recent article on the topic, Surface Coating Technique of Northern Black Polished Ware by the Microscopic Analysis by Dilruba Sharmin and Fumio Okada. The researchers analyzed a number of samples, and found that the glaze is produced by applying two layers to the ware. An under layer is of fine clay, which is then fired, and a final layer of organic substance—resin or the like—is applied to produce the final finish. The glaze is so stable that it lasts to this day—unless removed by well-intentioned excavators who wash them! 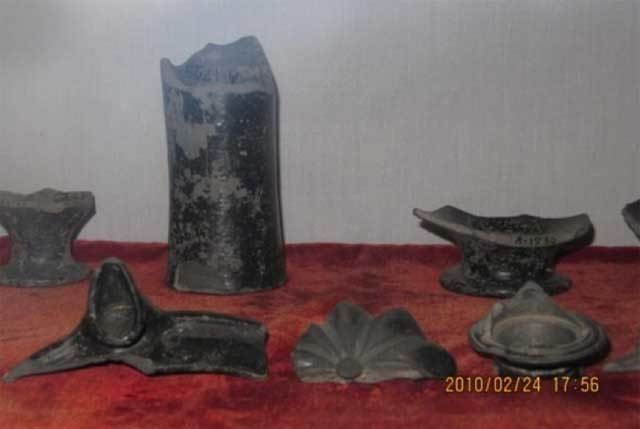 This process is delicate and time-consuming, and must have been developed by specialized craftsmen. So, even though we have access to NBPW due to its durability, it was not a common material in its time. Sharmin and Okada say:

This pottery was a highly valued, deluxe ware, mostly intended for the elite of the society. This is indicated by the limited number of forms discovered and by fragments of specimens (repaired with copper rivets, fillets, or pins). This finding shows that the broken NBPW was not usually discarded; it was continued to be used after being repaired with copper ware as the cost of repair was less than the cost of production and import.

This matches up exactly with the story of Nanda. His glossy, glazed black bowl was a luxury item, while the mendicants would have normally used a simpler glaze. Because they were cheap, and made to less exacting standards, these have largely disappeared from the record, while the luxury NBPW is preserved.

Given this, I think it’s helpful to translate the passage to bring out this connection:

Then Venerable Nanda, the Buddha’s cousin on his mother’s side, dressed in nicely pressed and ironed robes, applied eyeshadow, took a polished black bowl and went to the Buddha.

This, of course, raises a question: should modern bhikkhus and bhikkhunis use shiny bowls, like Nanda? I’ll leave that to you.

As a postscript, there is a further description of a vessel as *accha, found at Theragatha 2.40. The verse is very obscure, but the description of the jar or vase is quite clear:

The idea, reading from the verse and commentary, is that over the years the Buddha has continually filled the jar of the deathless with his teachings, so by now it is overflowing, so there is no excuse for not practicing. Clearly the description of the vase as accha is intended to convey the beauty and preciousness of the vessel, again agreeing with the identification with NBPW.

22 Likes
A mythology of cultural transformation in the Ghaṭīkāra Sutta
Intro to the Archaeology of Indian Buddhism
How big was the Buddha's alms bowl?
UpasakaMichael January 20, 2018, 10:59pm #2

I really enjoy this subject, and it seems a strong case can be made, as was done by Bhante, that the Bhikkhus and Bhikkhunis of the Buddha’s Sangha did not use the highly polished luxury class alms bowls. I took a quick look at the history of the pottery of that time, and stumbled across a few articles. I spent part of the afternoon today watching youtubes ( https://youtu.be/SkUGm87DE0k )on various countries/methods today that produced polished black pottery, as I was curious as to how it was made and fired.

The paragraph below might suggest that the red and black ware culture (BRW) that preceded the Buddha’s time only slightly might have been carried forward as the dominant non-luxury or basic means of firing pottery, for alms bowls. Perhaps most of the alms bowls of the Buddha’s Sangha were of the basic black ware (as depicted below), with Nanda cutting loose with eyeshadow and a NBPW alms bowl. The first fab monk

The black and red ware culture (BRW) is a late Bronze Age and early Iron Age archaeological culture of the northern and central Indian subcontinent, associated with the Vedic civilization.

In the Western Ganges plain (western Uttar Pradesh) it is dated to c. 1450-1200 BCE, and is succeeded by the Painted Grey Ware culture; whereas in the Central and Eastern Ganges plain (eastern Uttar Pradesh, Bihar, and Bengal) and Central India (Madhya Pradesh) the BRW appears during the same period but continues for longer, until c. 700-500 BCE, when it is succeeded by the Northern Black Polished Ware culture. https://www.revolvy.com/main/index.php?s=Black+and+red+ware+culture&uid=1575 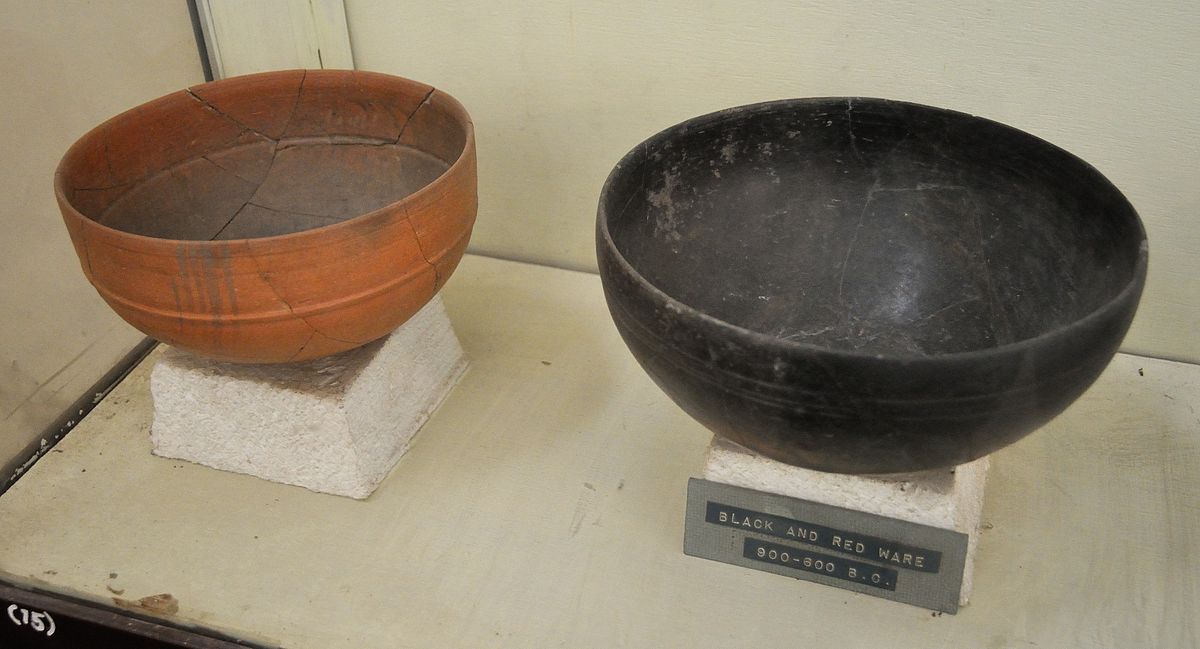 One of the reasons ordinary pottery does not survive is the practical reality, that pottery also get recycled… unless it is high fired ware; that clay has no further rebirths, because it cannot cling to anything!! Vitrification…