The Burmese translation of the Sutta Nipāta has now been uploaded to SuttaCentral:

The Burmese translation of the Sutta Nipāta has now been uploaded to SuttaCentral:

I am attending the http://www.burmaconference2016.com/ next weekend. May I make a few copies to distribute, in whole or in part, or even just the 1st Chapter Metta Sutta? Some of the scholars attending might enjoy seeing this from SuttaCentral…is there a way to download the entire text in pdf so that I can print it? I’ll make copies and note (with permission) with a heading or label that it is from SuttaCentral.

Great idea but please hold on for now. I’m having a meeting with Ayya Gunasari tomorrow about the Burmese texts. She says there are errors in it so I want to see what the extent of these errors is first.

Ayya, of course I won’t do anything until I hear further instruction from you. Thanks for the response.

I have spoken to Ayya Gunasari and it seems that this is a font-issue that only occurs on the iPad (and maybe other Apple products). I have to investigate further but I have attached the snp in pdf format for you to use.
I first tried making it into a LaTex document, but that requires a bit more study from my side to get the font right in there, so the attached is what I could come up with quickly.

The file burmesesnp.pdf is all of them, the rest are the individual suttas. (Metta Sutta = Snp008.pdf)

Hope this helps. Thanks for doing this!

I have also attached some standard front- and back-pages but maybe @sujato has some better idea on making something for this?

Ayya, this is great. Thanks! My hope is to get some of the conference participants to be aware of the great work that Ajahn Sujato, you, and all of the SC translators are doing with the EBTs. If you have any suggestions for me, let me know. My thought was to print a number of copies in a small binder for each, with the cover info you provided. I will do this with with permission from you and Ajahn Sujato, of course as to format. My only thought would be to add the Burmese script to the cover sheet (translating “Sutta Nipata” so that there is the English and Burmese script prominent on the face cover…can this be done?

Just FYI, you can make reasonable PDFs by printing from any SuttaCentral text page. We have a stylesheet optimized for printing, so just ctrl+p and print to PDF.

At least I think that reads “Sutta Nipata” … I will check with Ayya Gunasari later.

I’ve just come back from our Dhamma discussion evening which was all about if monastics should involve themselves with politics and of course the US elections were a big part of that discussion. So then reading your email right after that made me laugh.

I talked to Ayya G about it and we settled on a slightly different frontpage. (see attached). I also added a second page with the meta-data. I think it says something about where this translation is from (i.e. Ministery of Religious Affairs)
front.pdf (38.5 KB)

Really great, Ayya. Thank you for your work on this. Have a very good evening. 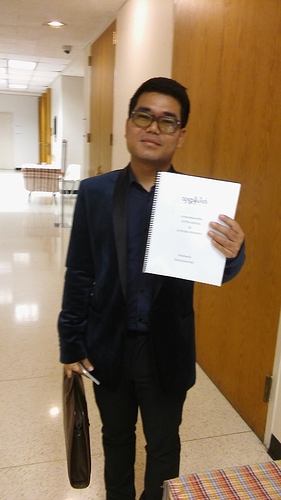 The reception at the Burma Conference so far to the new translation has been terrific.

Gustaaf Houtmann https://therai.academia.edu/GustaafHoutman was thrilled to have a copy. I met and had a nice talk with Australia’s Justine Chambers, who says hello to Ajahn Sujato. https://www.linkedin.com/in/justine-chambers-4582bb4a

The gentleman at the top photo walked past the table I was at, and hovered to read the translation’s cover. He asked enthusiastically to buy a copy, and of course, I told him it was completely free. Well, I did make him pose for a photo, which he was glad to do, and he then had me take a photo of his colleagues with him.

This is so nice, sadhu!

I’m looking forward to the time when all of our texts will be available as printed editions.

This morning was the final panel of the conference. I had an opportunity to meet and speak briefly with Dr. Khin Zaw Win Khin Zaw Win | Heinrich Böll Stiftung , Dr. Nyo Nyo Thinn Nyo Nyo Thin - Wikipedia , and Kyaw Zaw Moe, Editor of the Irrawaddy. Both gentlemen had been jailed by the previous Burmese government for 10 and 11 years, respectively.

I was able to present each of the above panelists a copy of the Sutta Nipata, and each was very pleased to have it. Ayya, I was at Abhayagiri this past weekend, and left for the excellent library there my last bound copy of the Burmese Sutta Nipata. There are some Burmese laity that visit there, and one of LP Pasanno’s resident lay assistants was very glad to help me set this up in the Abhayagiri library for all to see and use.

Sadhu Sadhu Sadhu … I saw the pictures of the new building on your FB.