In one of Venerable Bodhi’s notes on SN 54.12, we have the following. The first two images are his translation of the sutta and the third image is the note that I have a question about. 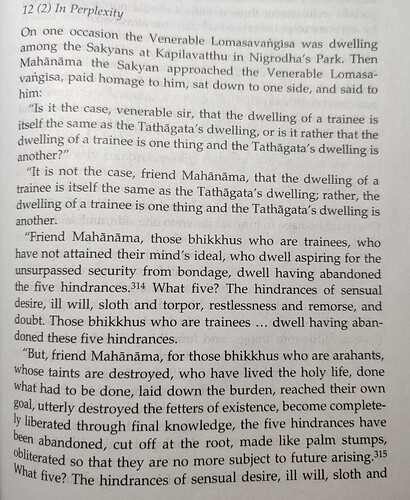 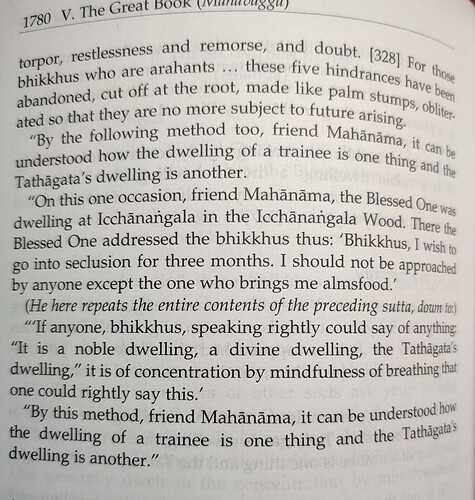 Any thoughts or speculations on this are welcome.

The hindrance of kāmacchanda in its restricted sense is synonymous with the lower fetter of kāmarāga, which non-returners have abandoned.

In its unrestricted sense (see, for example, the Kāmasuttaniddesa) the kāma in kāmacchanda also includes rūpāvacara and arūpāvacara dhammas, not just objects of the five sensory consciousnesses. Consequently, the compound kāmacchanda as a whole also includes the higher fetters of rūparāga and arūparāga, which non-returners have yet to abandon.

Shouldn’t that be six as in Buddhism mind is included as a sense ?

The jhanas involve suppression of the gross fetters (hindrances):

The desire to be born in fine material worlds (rupa brahma loka) means one continues to be bound to the cycle of birth and death (samsara). According to Theravada Buddhist teaching a meditator is able to attain eight stages of deep mental absorption (jhana); four fine material states (rupavacara jhana) and four immaterial states (arupavacara jhana) through the practice of concentration meditation (samatha bhavana) by focusing one’s attention on one of forty meditation objects. As the concentration deepens during concentration meditation, suppression of the five mental hindrances namely, sensual desire (kamacchanda), ill-will (vyapada), sloth and topor (thina middha), restlessness and remorse (uddacca kukkucca) and sceptical doubt (vicikicca) takes place. With the development of one-pointedness on the meditation object and the suppression of the mental hindrances, five qualities or attributes called Jhanic factors; initial application (vitakka), sustained application (vicara), rapture or joy (piti), mental bliss (sukha) and one-pointedness with equanimity (ekaggata with upekkha) also develop."—Ubeysekara

Kāmacchanda is desire for sensual objects:

Not those kāmā whichever beauties world

Not those kāmā whichever are beauties in the world

Since the kāmā here are clearly external sense objects, kāmacchanda cannot strictly speaking be applied to mind-objects. On this basis the 1st Jhāna pericope should read as:

“Here, bhikkhus, secluded from sense objects, secluded from unwholesome states, a bhikkhu enters and dwells in the first jhana, which is accompanied by thought and examination, with rapture and happiness born of seclusion.”

Rather than the standard:

“Here, bhikkhus, secluded from sensual pleasures, secluded from unwholesome states, a bhikkhu enters and dwells in the first jhana, which is accompanied by thought and examination, with rapture and happiness born of seclusion.”

Which is actually based on a definition of kāmehi that is originally found in the Vibhaṅga. This of course then means that Jhāna is an absorbed state, where the 5 senses are not experienced. We can say then that the non-returner has done away with desire for sense objects (kāmacchanda), likely due to having experienced the superior bliss of Jhāna, but still has desire for Jhāna & the formless, which of course have everything to do with mind-only experience. In other words, mind-objects.

Kama means mostly sex and food, and not just any object of the senses. So yes, non returners have abandoned kama. Hence why celibacy is a key factor for attaining non-return, but not once return (as per isidatta the layman sutta)

Kāma strongly implies sexual pleasure (mānusake kāme: S.1.9). There is no other object which so overwhelms a man’s mind as a woman, or a woman’s mind, a man (cittaṃ pariyādāya tiṭṭhati: A.1.1).

But kāma is not just sex. After all, the attractiveness of women is more than their sexuality. It is their wealth, virtue, industriousness, and ability to beget children (S.4.238). And during the pregnancy of the Bodhisatta’s mother, the sensuous thoughts that arose in her mind did not involve men (na bodhisattamātu purisesu mānasaṃ uppajjati kāmaguṇūpasaṃhitaṃ) (D.2.13).

Likewise for men. When a group of young Licchavis discussed the ‘five treasures,’ the Buddha mocked them for their preoccupation with kāma (kāmaññeva ārabbha antarā kathā udapādi), explaining the five treasures as not just the Woman Treasure, but the Elephant, Horse, Jewel, and Steward Treasures (D.2.172).

Those for whom gold and silver are allowed, the five varieties of sensuous pleasure are allowed.

Kāma singular means lust. Kāmā plural means objects of the 5 senses. These are mostly defined as pleasurable sense objects, but in suttas such as MN 38 we also see painful ones:

But they must face cold and heat, being hurt by the touch of flies, mosquitoes, wind, sun, and reptiles, and risking death from hunger and thirst. This is a drawback of kāmānaṁ apparent in this very life, a mass of suffering caused by kāmānaṁ. - MN 14

So, kāmā (plural) just means sense object at the 5 senses.

Right, but in the context of non-return it is referring to lustful objects.

Desire for sense objects, yes. This is likely due to having experienced the otherworldy bliss of Jhāna. I suppose once you have experienced that films, cars and games just don’t compare anymore and so you no longer desire those things. What the non-returner then gets stuck on is desire for Jhāna, or desire for non-existence in the formless. Arahantship then seems to be insight into how even states like Jhāna, lovely and refined as they are, are still anicca, dukkha & anatta and the insight that to turn to the formless, to chase non-existence, just leads to more of the same. This then seems to lead to a state of not intending towards refined existence (Jhāna), chasing non-existence (formless) and no intentions anymore towards 5 sense experience. By not intending anywhere, consciousness is not established anywhere and so nibbāna. Obviously if I am correct this means there can be no awakening without Jhāna, although stream-entry and once-return can occur without it (since they still have desire for sense objects)

There are five varieties of sensuous pleasure.

These however are not sensuous yearnings.

In the [terminology of the] Noble One’s training system they are called the varieties of sensuous pleasure.

Shouldn’t that be six as in Buddhism mind is included as a sense ?

The hindrance of kāmacchanda is the desire for kāmaguṇas. Though there are six āyatanas, only the objects of the first five are kāmaguṇas.

As for the desire for particular dhammas (i.e., the objects of manāyatana) this is not in itself a hindrance, though it may on occasion be the cause for hindrances to arise. For example, a meditator’s desire for the jhāna factors may generate restlessness if the said factors fail to arise.

I would say “sense objects” is a little vague. A non-returner desiring to see his parents or kids, which are sense objects (as in objects of the senses), is possible.

I would say that your second sentence is a little vague. What do you mean by “desiring to see”?

If you mean wishing to visit them out of a compassionate desire, say, to teach them Dhamma or make himself available to them as a field of merit, then this would be possible. It would be “desire” in the sense of kusala chanda.

On the other hand, if you mean desiring the sight of his parents, or their sounds, their odours, etc., then this would be to desire kāmaguṇas and would not be possible for a non-returner.

I would say that your second sentence is a little vague.

On the other hand, if you mean desiring the sight of his parents, or their sounds, their odours, etc., then this would be to desire kāmaguṇas and would not be possible for a non-returner.

This is what I also used to believe in the past, but today I am not so sure about that, as it’s a little more complex. I would say it’s not possible for an arahant, but is still possible for a non-returner.

Let me try to be clearer with four categories, there’s

So yes, for example, a non-returner would still want to see his parents or child’s faces, just because of an emotional connection, and not just any child’s face but their own child’s face.

A face is not limited to the sensual plane, as I believe Brahmas have four faces. So non-returners in the pure abodes have faces.

In the Mahaparibbana sutta only Arahants didn’t weep when the Buddha died, but everyone else, which I believe includes non-returners as well, weeped.

Another sutta to consider is SN 22.87 with Bhikkhu Vakkali who didn’t want to die until he saw the Buddha, and the Buddha told him

“What do you think, Vakkali, is form permanent or impermanent?”— “Impermanent, venerable sir.”…—“Therefore … Seeing thus … He understands: ‘… there is no more for this state of being.’”

Vakkali died an Arahant when he committed suicide, but perhaps before he died he was a non-returner. As a non-returner he still wanted to see the Buddha, in which case the Buddha told him that he is not the body, but the dhamma.