Notes on the translation of Sutta Nipāta

As you are aware, the last two chapters are often claimed to be particularly ancient

Speaking of which, I wonder what venerables Sujato and Brahmali think of these claims that these texts are especially early.

There’s no good reason to think that they are any earlier than the bulk of the prose suttas. I wrote on this in A History of Mindfluness and paste the relevant portions here.

The “gatha theory”, which includes several eminent scholars among its adherents, claims that the earliest recorded teachings that we possess today are to be found primarily among certain of the verse collections, notably the Aṭṭhaka and Pārāyana of the Sutta Nipāta. However, while I agree that some of the verse is early, I do not think that the reasons given suffice to establish that these verses are generally earlier than the prose. To briefly state the case for and against the gāthā theory.

Verse usually tends to be archaic; this could be supported in any number of cases by comparison of verse and prose passages by the same author even in modern times. This may partially be a matter of style, a preference for an archaic flavour, as in English verse one might affect ‘thee’ and ‘thou’. Another factor is that, due to the constraints of metre, it is more difficult to translate verse as compared with prose from one Indian dialect into another; thus even in the later hybrid Sanskrit literature, the verse tends to retain more archaic Prakrit features, while the accompanying prose tends towards more formal Sanskrit. This tells us something about the translation process, but nothing about the relative ages of the different parts of the original text.

This confirms only the chronological relationship in these few cases. In many other cases, verses are tacked on to the end of prose discourses, such as in the Aṅguttara, and there it is likely that the verses were added later. Anyway, there are also prose passages that are quoted or referred to in other prose passages, notably the Dhammacakkappavattana Sutta, which is explicitly or implicitly referred to in several important discourses. The references to the gāthās, moreover, while significant, never declare such passages to be the central message of the Dhamma. The key teachings, extolled over and again in the early texts, are such things as the four noble truths, the 37 wings to awakening, the dependent origination, or the ‘aggregates, sense media, and elements’. None of these topics are prominent in the gāthās. It would be natural to assume that the earliest scriptural body consisted of teachings on just such core topics. Such references may even refer to specific texts where these doctrines are elucidated. The primary source for all these topics is the Saṁyutta.

This argument has recently been repeated by Gregory Schopen, who says that these are the ‘only’ texts that have received commentaries by the time of the earliest known redaction. This seems like a strong point, until we realize that the Niddesa really just applies Abhidhamma technique to poetry, listing synonyms in mechanical style for each word in the verses. It is very similar to the Abhidhamma Vibhaṅga, etc., and must stem from a similar period as a minor spin-off from the Abhidhamma project. The Vibhaṅga is clearly the more important work, and that consists largely of quotations and commentary of central prose passages of the Saṁyutta and Majjhima. In fact there is much ‘commentarial’ material even in the four Nikāyas: the Saccavibhaṅga Sutta is an explicit commentary on the Dhammacakkappavattana Sutta. Much of the Vinaya, too, is a commentary on the Pāṭimokkha.

Again, this is simply part of the normal character of verse. Poetry is for inspiration, not information.

This shift, from the forest life to established monasteries, is depicted in the texts themselves as having already begun within the Buddha’s lifetime, and there is every reason to believe that this was so. It is difficult to live in the forest, and the Sangha must have, before very long, started taking in recruits who were elderly, or infirm, or weak, and who would have required decent accommodation. This plain common sense is confirmed in many stories in the early texts. Here we may point out the parallel with the Franciscan order, which was accused by St Francis himself of backsliding from the rigorous standards he had set. In any case, the prose does in fact constantly refer to monks living in the forest. The mistake stems in part from the failure to distinguish between the teachings themselves and the narrative cladding in which the teachings appear, which must obviously be later. The outstanding example here is the teaching on the gradual training, the main paradigm for the monastic way of life, found in tens of discourses. Although the texts as they are today are set in monasteries, the body of the teaching itself refers simply to the monk, ‘gone to the forest, to the root of a tree, or to an empty hut…’ to meditate, with no mention of monasteries. This is a good piece of negative evidence: we know that later Buddhism was largely based in large monasteries, hence the fact that so many of the teachings extol the forest life strongly suggests these teachings must have appeared before the development of settled monasticism.

I notice you have not included the late Ven. Ñāṇadīpa’s translation.

I don’t think I have a copy, do you know where can I get it?

The Silent Sages of Old Translations

This is a new translation of some suttas from the Suttanipata. The Silent Sages of Old - Suttanipata.pdf (1.4 MB) 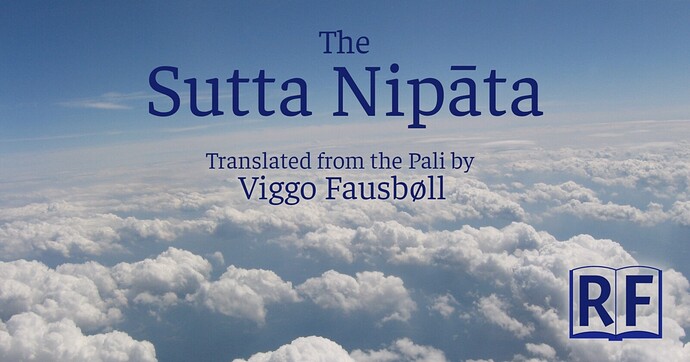 I’ll upload it here. It’s not a complete translation. It contains the Aṭṭhaka-vagga, the Pārāyana-vagga, and a couple of additional suttas. The Silent Sages of Old - Suttanipata.pdf (1.4 MB)

Good luck with this daunting project!

The Cadences are by E.M. Hare.

an ecstatic translation, whose archaic language and lack of precision renders it of mostly historical interest.

The Cadences are by E.M. Hare

Oh, thanks for pointing it out, I’ll fix it.

It’s in iambic trimeter - six-syllable lines of three iambs. He was translating during the Edwardian twilight when the meter underwent a brief vogue, starting with Kipling’s White Man’s Burden. But to get the lines to scan Chalmers ends up taking much greater liberties even than Hare. For example, with the Khaggavisānasutta he translates the rhinoceros refrain only in the first verse. In subsequent verses he reduces it to just the phrase “Go forth alone!” or the single word “Alone!”

Hurt naught that lives; do harm
to none; yearn not for sons
or friends; but live - as lives
th’rhinoceros [sic] - alone!

Alone! Companionships
breed fondness; fondness leads
to Ills as a consequence;
so mark where fondness ends.

Go forth alone! To live
for friends and comrades means
your own weal sacrificed;
beware acquaintances!

There is also a translation made by N. A. Jayawickrama: Suttanipāta: Text and Translation, published by the University of Kelaniya in 2001, 435 pages

Right, indeed, and he also did an extensive historical analysis, which is widely cited by Ven Bodhi and others. But I haven’t seen a copy.

I don’t have the Text and Translation, but his 1947 PhD Thesis (“Critical Analysis of the Sutta Nipāta”) was serialized and published by Pali Buddhist Review, who subsequently made their archives Open Access (so, yes, one can legally share the file).

I’ve taken the liberty of stitching together their serial PDFs into one, merged PDF, here, in case that’s helpful

This is my favorite translation (Ven Ñaṇadīpa’s–it’s only the 4th and 5th chapters and 3 other suttas). It’s very literal and also very readable. He has kept the verse form and amazingly, has also kept the original ordering of lines. I find it a simply beautiful translation. The Pali and his English translation are printed side by side, so it’s a wonderful way to study Pali as well. Highly reocommended!!

Thanks so much for this Venerable!

I have his translation. It’s too much to be scanned completely (435 pages), but if you happen to want to check how he translated some stanzas, I could scan these pages for you.

Bhikkhu Bodhi’s is perhaps even more accurate and literal than Norman’s. Its style is determined by its integration with the commentary, rendering it less readable than I would like.

FYI Bhikkhu Bodhi recorded a series of lectures on the Sutta Nipāta in 2004. If I remember correctly he follows Saddhatissa’s translation but makes many corrections along the way.

It can be found here: Sutta-Nipāta | BODHI MONASTERY

Hi Bhante, here you could find an edition of Ven. Ñāṇadīpa’s translation. It’s a selection, not the whole book.

From the web is possible to get a pdf version :The_Silent_Sages_of_Old.pdf (1,5 MB)

By the way, as an usual reader of Ven. Thanissaro’s translations, could you please tell more specifically why you say that? Because of use of the “&” maybe?

Thank you for the post. Ven Analayo shared that text during his talks on Ven Nanananda’s Nibbana Sermons, when he discussed some of Ven Nananda’s translations. However, the text was just attributed to:

The Translator
From a forest kuṭi in Sri Lanka

I gather he did not want to be identified when it was published, but he passed away September 2020.

Ven Analayo’s discussion is at around 1:13 of Lecture 16

could you please tell more specifically why you say that? Because of use of the “&” maybe?

No, I quite like the ampersand. I gave an example in a subsequent essay.

On befriending the learned: notes on mildly suboptimal translations Essays

When people think of translation, they often seem to imagine that there are hidden truths to be discovered, an unspoken conspiracy to hide the true meaning of the Dhama. Or they think their imagination supersedes the reality of the texts, indulging in creative hallucinations in lieu of linguistic spadework. The reality is much more mundane, and a lot more hard work. Take verse 24 of the Rhinoceros Horn Sutta for example. Here it is with Norman’s literal translation: Bahussutaṁ dhammadharaṁ b…

His eccentric choices of doctrinal terms are well known (“stress”, “unbinding”, and so on), but that idiosyncratic style regularly extends to the “regular” text as well, especially in poetry. If I consult a translation by Ven Bodhi or KR Norman, I can pretty much know what to expect. But with Ven Thanissaro, I never know if I’ll see a baldly literal rendering, or an obscure metaphor, or some insightful rendering no-one else thought of, or just a plain old mistake—we all make them! For this reason I tend to use his translations as a last resort; if I’m unsure how to render a phrase, and if I can’t find anything helpful in other translations, I’ll check his work, and occasionally find a useful turn of phrase.

I wish you the best for your new translation