Oh, vagga numbers, what are we to do with you?

Early Buddhist Texts (EBTs) have a complex hierarchical arrangement, which is similar (but not identical) across the various collections.

One of the most prominent structural elements is the vagga, which is typically a group of ten suttas, and is usually translated as “chapter”.

A common traditional method of referencing Suttas is by “collection, vagga, sutta” (eg. 1.1.1, with possibly other levels of structure as well). On SC, we follow modern trends in simplifying reference numbers. Normally vaggas are not included, but in some cases (eg. ud, snp) they form the first element of a two-numbered reference.

This then leaves up in the air the question of what to do with the vaggas and other structural elements in between the sutta and the main collection. Let’s call them “void nodes”.

There is, to my mind, a definite benefit to excluding the void node numbers: they are confusing. It’s hard to keep track of exactly what number goes where, and what all the different levels refer to. Which is why we keep our main system as simple as possible. So we want to keep the system clean for those happy with our system, but still support those who use the traditional system.

That there is no obvious presentation is clear by comparing the different editions. Let’s look at the first sutta of SN. The relevant structural elements are:

Confused yet? One thing that is fairly consistent is that they have triple-number system, with either a single number in each heading:

Or by extracting the triple number:

Now, to my mind, the method of DN and MN is best for the texts themselves. Keep the collection with the reference number there. The vagga and other elements are not really part of the sutta, they are part of a navigation structure. Of course they are still visible in the breadcrumbs and other navigation.

In this proposal, each sutta heading would have two, and only two, elements.

This makes everything more clean and consistent. Void nodes are all removed.

Okay, coming around to a proposal here.

Create a set of files, call them sectional-numbering (give me a better name!). These would have keys that are identical with our current name files, which include the titles of suttas and void nodes.

We’d simply duplicate these, but put numbers instead. (Note that in such cases, we can’t trivially auto-generate the numbers, because there are always exceptions like skipped suttas, repetitions, ranges, and so on. So they’d have to be pre-generated and hard-coded.)

Probably follow the MS system for how to state the numbers (eg. it does not include the vaggasamutta). But use an “additive” system, which is the normal way to number sections in a document; that way, it’s always clear what level is meant.

Then the numbers can be imported whenever wanted.

Hey, I just found that there’s an ISO standard for section headings! There’s a standard for everything. Thanks, standard-makers, you make life easier for the rest of us.

International standard ISO 2145 defines a typographic convention for the "numbering of divisions and subdivisions in written documents". It applies to any kind of document, including manuscripts, books, journal articles, and standards. The ISO 2145 numbering scheme is defined by the following rules: A table of contents might look like: Division and subdivision numbers are cited in written text as in:

The numbers (1.1.1 …) can become confusing. Regarding SN, I think it is better to just indicate:
the major 5 vaggas, 56 samyuttas, and then the sutta numbers (total of 2862 suttas in PTS).

I like having the Vaggas in the navigation tree, since my phone can’t load every SN sutta on one page

But I agree it’s confusing to have the vagga on the suttas.

In the navigation, it should say what range of sutta numbers are in each vagga (for ease of use), but their id should be a simple number (i.e. I think the Dhp chapters should have simple numbers and not ranges like they do now).

I think it is better to just indicate:
the major 5 vaggas, 56 samyuttas, and then the sutta numbers (total of 2862 suttas in PTS).

Hmm. The problem is, no-one, so far as I know, in the Pali world uses this system. The point of adding these was not to invent a perfect system, but to make available a traditional system that is actually in use.

their id should be a simple number

Again, this is inventing a new system.

Obviously I wasn’t clear enough. We are not introducing a new system that no edition uses. The purpose of my proposal is to introduce a compatibility layer so that users of various editions can reference SC more easily. This is something like the use of PTS numbering, which of course is a eurocentric convention.

Take the Gahapativagga in MN, which is the start of the second fifty. It is numbered 1 in the VRI, MS, PTS, and BJT. It is the sixth vagga of MN, but no edition calls it vagga 6.

The Kandarakasutta, which is the first sutta of the Gahapativagga, is numbered MN 51 on SC. The BJT, which is one of the most widely used editions, numbers it 2.1.1. The VRI and MS editions omit the pannarasa number, so they have 1.1. PTS has both a simple number (51) and, in the header, “II. 1.1. Kandarakasuttam (51)”.

this is inventing a new system

Oh. I was under the impression that the Dhp chapters were commonly numbered. My bad

Thank you for opening this discussion. It’s indeed a complex thing to think about!

Just imagine you want to find SN 1.1 through the navigation and don’t know how it’s called. That is not such an exceptional use case, is it? If I understand your proposal correctly, the user would have the choice between no numbers at all in navigation or an array of numbers that differs from what is on the Sutta page.

Where we currently show the vagga titles on a Sutta page, the vaggas have their own numbers which are not included in the Sutta ID (with the exception of Snp and Ud, as you already mentioned; but there it is the general ID which is the same everywhere). I think reference to the same Sutta should always be with the same ID. (We can include different ones if we make clear that these stem from a different numbering system; but not different numbers on Sutta pages and in navigation.)

Hmm, this is the first thought that comes to mind when seeing this. It certainly has more complex facets.

Oh. I was under the impression that the Dhp chapters were commonly numbered. My bad

No, my bad, yes the Dhp vaggas are commonly numbered sequentially, but this is because there are no other internal breaks. If there are pannarasas, etc., then the numbering is restarted.

So if my proposal were introduced, there would be sequential Dhp vagga numbers.

Someone who is clicking through the navigation in order to find SN 1.1 wouldn’t recognize that this is what they are after. Would they?

Yes they would. Because this is an optional view. Once again, this is for readers of editions that use this system, who want to find a sutta by using this system. They hit a button that displays the numbers for that purpose.

not different numbers on Sutta pages and in navigation.

Perhaps it would be better to leave the sectional-numbers out of the toolbar, just have them in the “nerdy row”, where they can be enabled or hidden.

I’m thinking of making the PTS numbers viewable/hideable too.

Maybe you have an icon in the toobar that has “extra reference numbers” or something like that. Click it, you get two options:

Or more if we get fancy. Then you can show/hide them at will. Personally, I never use the old PTS numbers, except very occasionally looking up a reference, so I’d rather hide them away.

Or more if we get fancy.

In fact, why not simply use the list of references we already have in the sutta texts? That way, people can choose to consistently have the system that they are using in both text and navigation, or not.

It would also mean we could avoid introducing a new set of files: just add the relevant numbers to the bilara-data/reference files.

We can re-use the “top-sheet” UI from the texts to show all the editions. This gives us space to explain the UI.

This would not only give more control to users, it would make the whole thing less euro-centric by not having PTS as default.

Yes they would. Because this is an optional view.

I understood if I don’t enable this optional view, I will just see no numbers at all, only the text of the titles. But this might be a wrong impression?

Perhaps it would be better to leave the sectional-numbers out of the toolbar, just have them in the “nerdy row”, where they can be enabled or hidden.

To be clear what the “nerdy row” is— 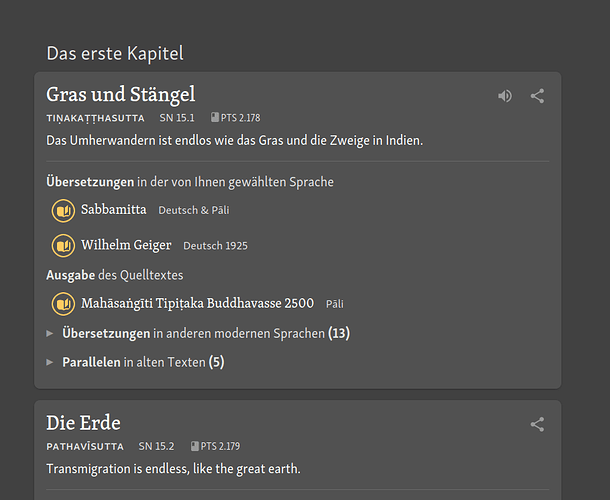 Is it this line?

If now I understand correctly, we would then still see this

but without “PTS 2.178”; unless we enable “extra reference numbers”.

Personally, I never use the old PTS numbers, except very occasionally looking up a reference, so I’d rather hide them away.

a traditional system that is actually in use.

The Pali traditional system for SN is vagga (5), samyutta (56 total), and sutta, which are also the same system as SA tradition (5 sections, 51 samyuktas, and unclear number of sutras: according to CSA is 13412; Kokuyaku Issaikyo is 13444. See note 2, p. 17 in the Choong MK’s Fundamental Teachings of Early Buddhism).

I just use numbers simply for reference and listen to suttas straight through ignoring hierarchy. So I’ll defer to those with richer minds on this issue.

This would to my mind add a lot of extra confusion.

Yes, I certainly agree with this.