On chanting and enchanting

There’s a fairly well known phrase in Pali that’s typically found when the Buddha refused to eat food that had been “chanted over”, or ritually blessed, by the brahmins. (See SN 7.8, SN 7.9, SN 7.11) He’d say he would not eat what was gāthābhigīta, saying that the Buddhas rejected such. Then he’d assert that no-one in the world could eat such food, and recommend that the brahmin toss the food away in barren water. When the brahmin did so, the food hissed and sizzled (with lovely onomatopoeia: cicciṭāyati ciṭiciṭāyati) like an iron plough heated all day. (As pointed out in comments by raivo, not all texts have this part.)

Now, this is a remarkable passage with many interesting elements. Obviously the main thrust is to reject brahmanical magic. However the extent to which the magic is acknowledged to be real is unusual.

The PTS dict, based on these passages, says:

abhigīta: sung for. Only in one phrase, gāthābhigītaṃ, that which is gained by singing or chanting verses 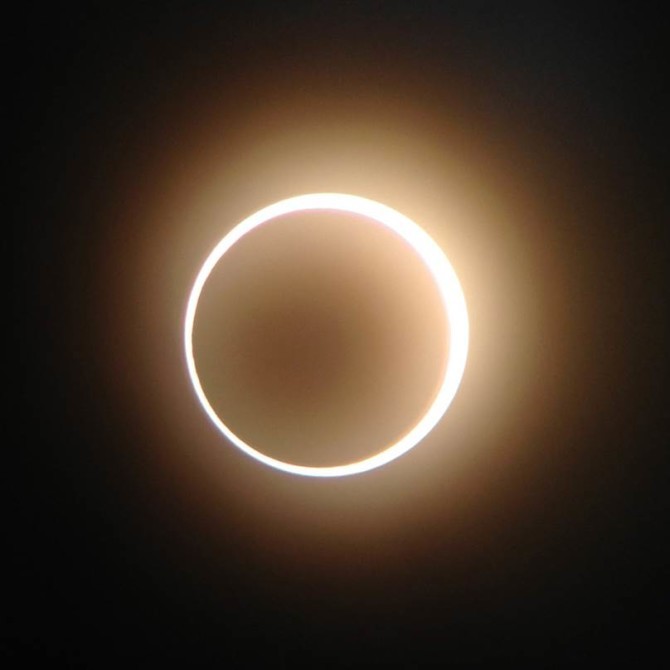 However, this ignores the other occurrence of the phrase, at SN 2.9 & SN 2.10. There, Rāhu releases the moon (from an eclipse) because of the power of the Buddha’s verses, saying that if he did not, his head would explode in seven pieces. Now, the threat of such an exploding head is part of brahmanical magic, and in the Upanishads, it actually happens. Clearly this has nothing to do with obtaining food. The common element, rather, is that of magic potency.

The Critical Pali Dictionary gets it right:

conjured (by a potent spell)

K.R. Norman, in his comments in The Group of Discourses regarding a parallel in Snp 1.7 (p. 160, note on verse 81.), supports the CPD’s reading. Disappointingly, Cone’s dictionary misses this point.

The relation between gīta and abhigīta is, in fact, exactly similar to the relation between “chanted” and “enchanted”. Thus, rendering the phrase with something vague like “chanted over” misses the point. We’re dealing with magic, and we should use magical terms.

My head would have exploded in seven pieces;
I would have found no happiness in life,
if, when enchanted by the Buddha’s spell,
I had not released the Moon.

These verses have, in fact, been used as magic invocations by monks until the present day. While their efficacy in ending the eclipse is doubtful, such things perform a valuable social service. Eclipses are terrifying: they are a random irruption of chaos into the most predictable of orderly events in the world. Imagine this happening in a village; the terror and the panic, the fear that the world was collapsing. The monks call the villagers into the temple, say, “Do not fear, the Buddha will take care of us.” They sit everyone down, do the chant; and lo! the eclipse recedes.

There is, of course, the slight problem that the Buddha consistently rejected magic, and one of the major themes of the EBTs is to displace brahmanical and pre-brahmanical superstitions.

A related point concerns a line that occurs a little later in the stock verse where the Buddha rejects enchanted food. here’s my (current) rendering:

“Food enchanted by a spell isn’t fit for me to eat.
That’s not the way of those who see, brahmin.
The Buddhas reject things enchanted with spells.
Since nature is real, brahmin, that’s how they live.

The line of concern is the last one, in Pali:

The first phrase is a locative absolute, but it is unclear exactly what dhamma means here. Norman takes it as “doctrine” and translates “as long as the doctrine lasts”. But this seems very unlikely. Why would such a practice have anything to do with the existence of the teaching?

Ven Bodhi has “principle” here, which is better. But the overall rendering “As such a principle exists … this is their rule of conduct” seems incoherent; why should a “rule” exist because of a “principle”? And why is the “principle” referring back to something? The Pali is not doing this, and no such principle has been mentioned. The only prior use of dhamma is of the brahmanical practice rejected by the Buddha, which I have rendered “way” above.

The older translation by CF Rhys Davids has “True to the Norm, this is their mode of conduct”, with the following note:

Lit. the Dhamma being there or existing, this is the way of living. Buddhaghosa paraphrases: dhammaṃ apekkhitvā, dhamme patiṭṭhāya jīvilaṃ kappentānaṃ esā vutti: ‘of those who maintain life with an eye to the Norm, established on the Norm, this is the conduct.’

I think the phrase has an echo of the more common idiom diṭṭhe’va dhamme. This is used in the sense of “in this very life”, “in the present existence”. But its real meaning is more like “in the phenomenological world perceptible to the senses” or perhaps “in the empirical realm”. Here the sense of dhamma is that of “knowable” (ñeyya). The idea is that the world operates according to principles of cause and effect, and these form regular patterns of phenomena that can be perceived and understood.

In this sense the idea is similar to the difference between the empirical reality of science and the invisible, irrational workings of magic. And I suspect this is precisely the point being made here. To paraphrase:

The world operates according to observable and rational principles of causality, which form a system of natural principles and laws we call the phenomenological reality or dhamma. Since this is so, we live in accordance with this, not according to your magical enchantments and ritual invocation of deities.

Which is, admittedly, a little clumsy as a translation! However it does make the line actually meaningful in its context. My rendering above is intended to capture this sense, however poorly.

Obviously the main thrust is to reject brahmanical magic. However the extent to which the magic is acknowledged to be real is unusual.

From Bhikkhu Bodhis translation and he’s note on SN 7.9 I got the impression that the problem was with the Buddha’s verses - that the Brahmin only wanted to give him the food after the Buddha had said some nice things and the Buddha didn’t want the monks to start “singing” for their food. I might be wrong but usually in the suttas a dhamma talk is given when the meal is finished, not to earn the meal. Although I wasn’t at all aware of the whole brahmin magic thing, so I might have jumped to some wrong conclusions.

This is the rationalizing explanation. But we’re in a magical context, and we need to think like sorcerers.

If it was just that the Buddha didn’t want the monks to “sing for their supper”, then the food wouldn’t have an intense magico-chemical reaction when placed in water. Nor would the people involved have been to consistently described and being shocked and awestruck by events.

In my White Bones Red Rot Black Snakes I argue that the magical subconscious is routinely suppressed in modernist Buddhism; this would be another example of this.

While the rational tenor of the Buddha’s words tends to bias us, never forget that we’re dealing with a culture deeply imbued with magic, ritual, and superstition. 2,400 years later, a brahmin family looked like this: 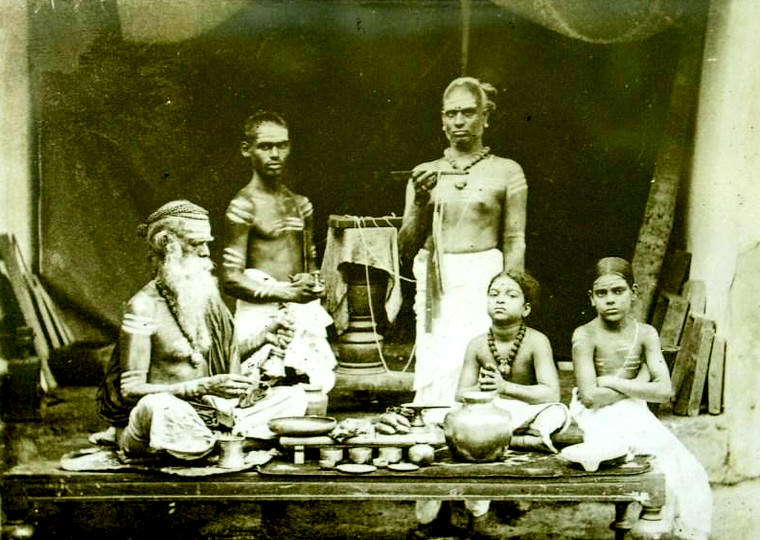 And that, by the way, is in Sri Lanka, after two millennia of Buddhist civilization.

The striking thing is not that there are magical elements in the EBTs, but how few there are.

If it was just that the Buddha didn’t want the monks to “sing for their supper”, then the food wouldn’t have an intense magico-chemical reaction when placed in water.

To me this magico-chemical reaction seems more like the Buddha’s way of showing to the brahmin how powerful he’s verses really were (how worthy of the food he really was). After all he does say:

I do not see anyone, brahmin, in this world with its devas, Mara, and Brahma, in this generation with its ascetics and brahmins, its devas and humans, who could eat and properly digest this sacrificial cake except the Tathagata or a decipe of the Tathagata.

If the brahmin’s verses were really the root of the magic then all the brahmins who usually eat the sacrificial cake would always have problems digesting it.

SN 7.11 doesn’t have the placing in water and sizzling and hissing part at all but the same story in Snp 1.4 does. So perhaps it was a later addition. And even if it wasn’t, I don’t really have a problem with the magic part, it just seems more logical to me that what’s behind the magico-chemical reaction is the Buddha’s magic, not the brahmin’s (or perhaps some devas showing the might of the Buddha to the brahmin).

Anyway, in both cases what the verses seem to me to be about, is “oh yeah…I’ll tell you how worthy of this food I really am”. And after convincing the listener, he’s showing that he didn’t say all those things just to fill his belly. Reminds me of some cases where monks show off their supernormal abilities to laypeople and after that quietly depart from that place never to return again.