There is a stock passage on the various forms of austerities and self-mortification. It’s found in full in MN 12, and fully or partially in several other places. It is a fascinating and vivid account, one of the places in the Suttas where the Buddha’s personal experience is described most fully. As you might expect, there are numerous obscure or problematic terms found in the account. Here are some notes on issues that I encountered. It’s not meant as a full account, just some points of interest.

This refers to situations where a Jain or Jain-like ascetic would refuse to accept offered food. Ven Bodhi translates this as “across a threshold, across a stick, across a pestle”. This translation remains consistent from MN to AN. But it seems highly unlikely. There’s basically no support for the idea that eḷaka means “threshold”. And while “stick” and “pestle” are straightforward, the meaning of the phrases in this context is not. Finally, how did antara become “across”?

The whole translation gives the impression that the Jain rules were weird and arbitrary. However, while they often seem extreme in their application, Jain ethics are in fact highly rational, and follow very explicitly from their core value of non-violence.

Let’s translate according to the ordinary, everyday meanings of these terms.

An ascetic would not accept food:

where there is a sheep kept inside, or a weapon or a club kept inside.

Now it makes perfect sense. A Jain would not want to accept food where animals were kept for slaughter, or where the ownership of weapons showed a propensity for violence.

Having said this, there is another possible reading of musala. In MN 81, the ideal lay disciple Ghaṭīkāra is described in glowing terms, including following a number of monastic rules. one of these is that, even though his livelihood is pottery, he does not dig the earth, either by hand or with a musala. Here musala must mean a pick or shovel of some kind. This would also make sense in the Jain context, as they regarded earth as a living entity and would not harm it. So perhaps they would not take alms at a house with digging implements.

Incidentally, such restrictions are, in one of those lovely ironies of history, why the Jains are today a wealthy community. Unable to farm, they turned to trade, which was a struggle at the time, but in the long term turned out to be much more profitable.

In the same passage we find:

Thusodaka is obscure, and only found in this stock phrase. From the context, it evidently refers to some kind of liquor. Thusa means the husks or chaff of grain. The commentary says it’s a brew fermented from grain. Beer is one of the most widespread and ancient of brews. Often it would be a much coarser thing than we know today, a thick breadish brew.

It’s curious that there’s no common word for beer in Pali, but I think this must be it. Thusodaka refers to that fundamental pillar of civilization, beer.

Some of the most memorable imagery comes when the Buddha describes his extreme state of emaciation due to fasting. You’ve all seen the images. 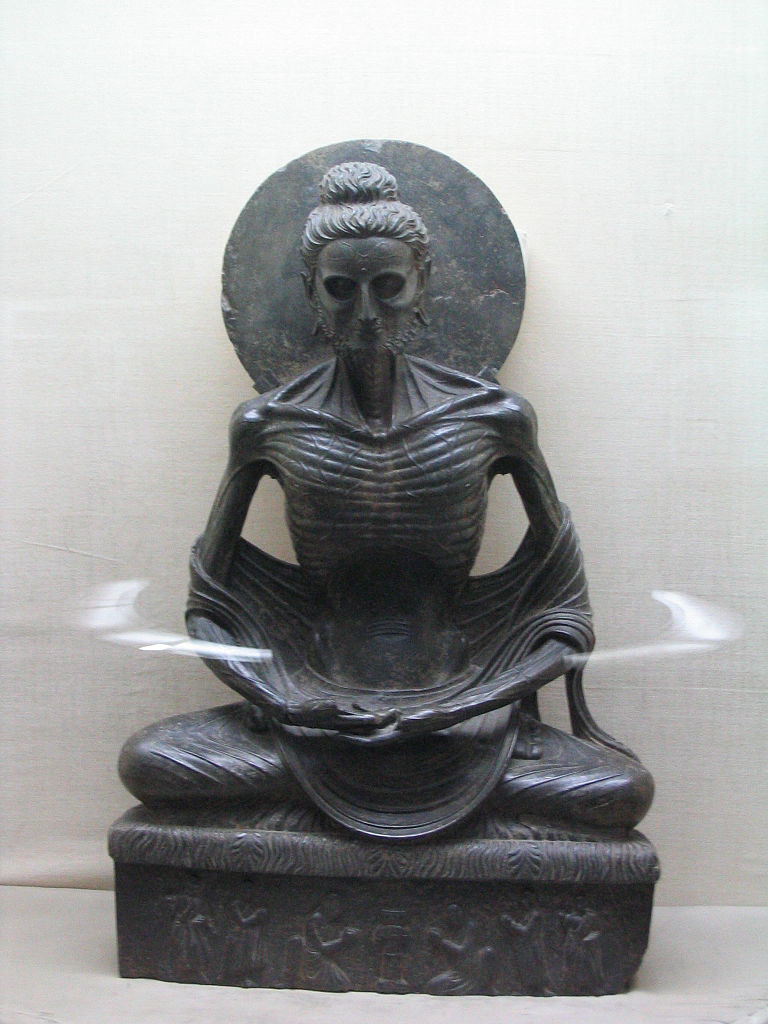 The Buddha gives a series of similes to describe his emaciation, the first of which says that his limbs had become like:

Now, all the sources I have seen agree that this means some kind of creeper. This is not only in the Pali sources, but in the various Sanskritic dictionaries. Ven Bodhi follows this in rendering it as “the jointed segments of vine stems or bamboo stems”. The phrase seems to be very old, since it is preserved almost identically in the Sanskrit parallels.

Curiously enough, though, neither āsītika nor kāḷa is attested elsewhere as a kind of creeper. You’d think that at least one of them would turn up somewhere, but all the dictionary entries hark back to this same passage. They must all ultimately rely on the commentarial explanation.

What’s even more curious is that, as with the “sheep” passage I discussed above, these terms are, in fact, well known, and their ordinary meaning works perfectly well in this context.

In other words, the bodhisatta became so emaciated that his limbs were like:

the joints of a man who was eighty years old or who had died.

As a side note, in the edition I use, a phrase a little further down has been omitted in Ven Bodhi’s translation:

Nice detective work! Of course, it is because we are standing on the shoulders of eminent scholars that we are able to focus on such refined points.

By the way, I took the liberty of adding an end quote in your second paragraph.

where there is a sheep kept inside, or a weapon or a club kept inside.

then curiously only sheep is mentioned, while it must have not been the only livestock specie raised for slaughter
maybe that’s an indication of it being the most common… perhaps thanks to being the source of not only meat but wool as well, which made keeping them more viable

and it follows from your argumentation that the Bodhisatta must have practised austerities of the Jain tradition, did you mean to make such a connection?

the Bodhisatta must have practised austerities of the Jain tradition

Indeed. His practices and ideology in that period were identical with the Jains. While the Buddhist texts do not say that he was a Jain as such, the Jain texts say that he did indeed spend time as a Jain. Possibly there’s no contradiction there. The movement may well have been a somewhat loose one, and ascetics would come and go, with affiliations not necessarily spelled out. But anyway, for all intents and purposes, his practices and beliefs in that time were indistinguishable from Jainism.