We recently had some chat about the number 84,000, traditionally said to be the number of “teachings” passed down by the Buddha and his disciples. I happened to come across this article, which reminded me of some of the implications of such numbers, as experienced in Buddhist communities: 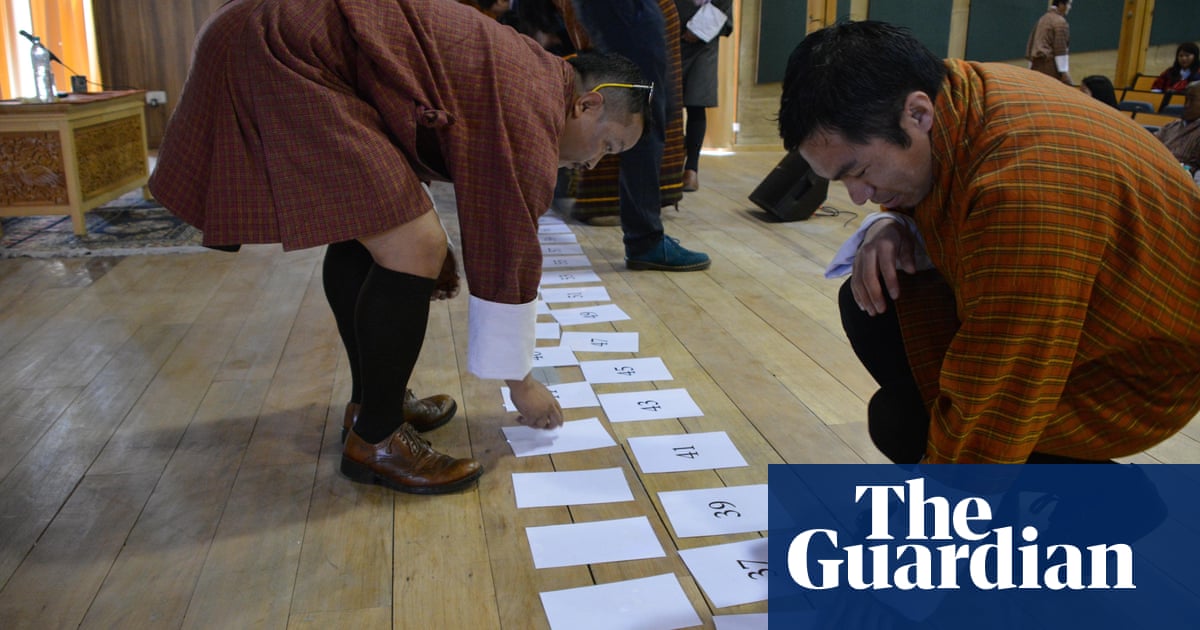 Oxford mathematician Marcus du Sautoy visits the mountain kingdom, which is successfully taking on the challenge of inspiring children to love maths

“Can primes help me to understand the significance of the number 108 in Buddhism?” Kesang, a teacher from the Punakha valley asked me as we broke for a morning snack of momos, a Bhutanese dumpling. Never one to shirk a challenge, I said my first instinct would be to pull the number apart into its prime divisors to see how it is made: 108=2x2x3x3x3.

As it turns out, this does relate to one of the explanations of the significance of 108 in Buddhism. Kesang explained to me that Buddhists believe we have six senses: our five western senses together with the sixth sense of consciousness. These senses can be experienced in three ways: good, bad or indifferent. They can also be internal or external to the body. Finally they can be in the past, present or future. Which gives (2x3)x3x2x3=108 different categories of senses.

As we began to explore the number further, we found more mathematical connections. I’d driven over the high pass of Dochula on my way to Punakha valley and had stopped to take photos of the stupas (dome-shaped Buddhist shrines) that adorn the peak. “You know there are 108 stupas up there,” chipped in another teacher called Chime from Punakha central school. We began to think about how the stupas might be arranged. If one views 108 geometrically then it has nice properties because of its high divisibility. Take a 3x3 grid and in each square, place 12 stupas arranged in a 3x4 pattern and you get a very satisfying arrangement of 108 stupas.

Here we have three aspects of the number 108:

When discussing such numbers, we often end up following the usual path: First someone takes it literally, expecting it to be an actual mathematical count, then we say it’s just a convention or an expression for “very large number”, and there it ends. But the reality is much more complex and interesting.

The first thing to note is that it is not as inaccurate as just “heaps and heaps”. As our discussion on the number of suttas shows, if we really expand all the suttas out, in the 4 nikayas alone we have nearly 20,000 suttas. Add the Khuddaka, the Vinaya and Abhidhamma, and 84,000 seems like a reasonable ballpark figure.

But, like 108, 84,000 is not just a randomly picked number. It’s a higher expression of the number four. Loosely, it’s 4 times a thousand, doubled, and then some. So it’s an abundance, a plenitude, a universe of fours.

Now, four is the basic number of symmetry and balance. As the directions, it expresses a simple but universal harmony, facing each way to cover the whole world. Seeing things in terms of multiples of the number four is a way of expressing a universe that is meaningful, ordered, harmonious. Using a specific, symbolically charged number conveys this sense of order and meaning in a way that “very large” never can.

And while as a specific number this can only ever be an approximation of the teaching, this doesn’t mean that mathematical specificity was neglected. Any time you do any large scale building, you need precise numbers, and in ritual spaces, the symbolism of these is worked out in great detail. The number four and its higher powers, as in the example in Bhutan, have been used to generate aesthetically pleasing stupas, Buddha images, temples, and so on through the whole Buddhist tradition.

When building SuttaCentral, I applied the same principles to website design, building the proportions of the site off a grid based on the ratio 2x3, as derived from the Dhammacakkappavattana Sutta, and especially emphasizing the number four. In our new site we are using Google’s Material design pattern, and I was delighted to find that under the hood that uses the same idea, a grid arranged in specific multiples of 4x4 pixels.

It’s no coincidence that ancient Buddhists and Google use similar principles in organizing space. The use of such simple, balanced, and harmonious proportions is a way of visualizing the idea of a universe that is ordered and meaningful. Whether applied to Google’s data or the dhammas of Buddhism, it helps ease a student into a difficult area, reassuring them that, while the numbers involved may be overwhelming, they may be understood with the help of simple overarching principles.

It would be interesting to read a study of the textual layers of Buddhism that bases itself mostly on the numerologies of different Buddhist texts that come from different times.

If we assume Buddha spent 50 years 300 days per year giving Dhamma discourses every day, it will come only to 15000 Suttas.

That’s why it may not be right to understand what Ananda is recorded to have said in the Thag17.3 as equivalent to an indication of the expected number of suttas:

“A wise person would not make friends With a slanderous or hostile person, With a miser, or one who delights in the misfortunes of others; Association with a bad person is harmful. The wise would make friends With the faithful, the pleasant, Those...

Mind that Ananda is above recorded to have heard 82,000 and 2,000 dhammas from Buddha and the bhikkhus, respectively.

While it makes sense to translate dhammā as “teachings” here it may not be necessarily correct to expect tha 84,000 recorded discourses (suttas / sutras) would be found in the Tipitaka / Tripitaka.

Okay, but most suttas are pretty short. A typical AN or SN sutta would only take ten minutes or so to deliver, so he could easily teach many each day!

In fact, if we take the above math seriously, and allow for the Buddha to teach, say, five to ten suttas each day, we’re back in the ballpark of 84,000. Again, not to insist that it’s meant as a literal number, but it doesn’t seem to be completely unrealistic.

I have found this from http://www.academia.edu/3575775/Sacred_Numerology_and_Axial_Thoughts_of_Ancient_India:

The number 84 says Elliot[*], corresponds to historic reality and is attested in all Indian traditions and ancient thoughts whether Hindu, Jain, Ajivikas or Buddhist. The idea is to express completeness of universe as understood by Vedic Aryans and ancient thoughts of Metaphysics. The number 84 represents the product of 7 (Number of known planets in universe in ancient time) and 12 (the number of months in a year for moon to complete the earth’s rotation). This represented a total universe in their thought and explained the linkage of astronomy that is also based on similar thoughts and observations.

As I know, 84K means so many not exact 84K. I don’t have reference for this. Hope my answer can help you Bhante…

In fact, if we take the above math seriously, and allow for the Buddha to teach, say, five to ten suttas each day, we’re back in the ballpark of 84,000.

I do not think Buddha was like a local radio station talking non-stop whole day.

I am with you. But it is reasonable to assume that except for when he would go into silent retreats (which was not uncommon as Sutta and Vinaya texts suggest) people would come to meet him at least 2 - 3 times a day. It seems as well that on Uposatha days large crowds of laypeople would come to wherever he and the Sangha were staying as well.

If we acknowledge that Ananda was alluding to teachings instead of full on discourses (as the Pali says), it is reasonable to assume that at least two or more thematic teachings could come up in each interaction or conversation.

Mind that the figure attributed to the Buddha is 82,000 and not 84,000. Ananda is quoted to refer to 2,000 as the number of teachings he heard from bhikkhus.

So, the ballpark maths would be:

Here the assumption is Buddha taught something new all the time.
Buddha’s teachings are very reptishes.
So you have to discount your figure by a substantial percentage.

It all boils down to how one defines dhamma as found in the aforementioned and quoted quote from Ananda.

If we equalise it to a teaching event, even if it was about a recurring theme and basically a repetition of something said to someone else, then the maths holds true.

Nevertheless, it’s much more likely that the 82,000 and 2,000 figures are just idiomatic superlatives (like gazillion).

Above all, for the sake of Buddhanussati, we’re free to believe whatever inspire us the much!

As @Sylvester pointed out in the newly uploaded Ekottarāgama 8.1 this number appears.

… When the Buddha, the Blessed One, resided in the park of Anāthapiṇḍada in Śrāvastī, he said to his bhikṣu: O bhikṣu! No one can be larger than the King of the Asura. He measures 84,000 yojana. His mouth is 1,000 yojana wide. …

If we equalise it to a teaching event, even if it was about a recurring theme and basically a repetition of something said to someone else, then the maths holds true.

I agree .
I generate at least four posts in average in their Dhamma discussion group according to Dhamma Wheel. It is not surprising Buddha generated 84000 verses in his lifetime as Buddha.

Eighty-four thousand is treated as a magic number in several suttas and for several things:

DN 2 (Discourse on Fruits of Contemplative Life) and MN 76 (A Sandaka) use the eighty-four thousand to refer to the great aeons.

Considering the false suttas, plus the repeated ones, plus the reiterations of the same, which reflect no more than mnemonic exercises without more utility than help to remember, in the end the number of basic suttas from which everything is revealed are only 9.
And other 9 generators of minor themes.

From those 18 and using the beloved combinatorial adding mnemonic techniques the 11500 suttas that populate the four canonical nikayas.

The Buddha could expose the entire Dhamma in two or three days. The rest, with thousands of scholastics over thousands of years, is more than enough.

Interesting!
To me 84,000 was just the gazillion of those around the Buddha in his days!

Hmm, as an old statistician I feel tempted to compare this to the (monstrous) saying: “You should only believe in statistics that you doctored yourself.” (which, ironically, has itself a history of fake authorships…)

I found 80000 from Buddha in Agamas for me it’s a indication that the 84000 is later tradition from around when Mahāyāna started to use because the extra 4000 is because of their Sūtras are considered also Buddha’s words? But indication also can be for us that that Ānanda verses in Pali was added later

Venerable Ānanda has also said, “Venerable friends, I have received eighty thousand teachings from the Tathāgata and have memorized them without forgetting them, [but] that for that reason I might become conceited, that is not the case.” That Venerable Ānanda [is able to] make such a declaration, this is said to be an extraordinary quality of Venerable Ānanda.

I wonder if in Ghandhara the amounts are mentioned.

Here there are 84,000 great eons. Both the foolish and the wise are continuously reborn until the ultimate limit of suffering.

It about how humans create these statements.