On the politics of a particle

In MN 36 and related passages, after the Buddha wasted his time with self-mortification, he reflected on his failure, leading to his deepest insight:

‘Could there be another path to awakening?’

Then it occurred to me:

‘I recall sitting in the cool shade of the rose-apple tree while my father the Sakyan was off working. Quite secluded from sensual pleasures, secluded from unwholesome qualities, I entered and remained in the first absorption, which has the rapture and bliss born of seclusion, while placing the mind and keeping it connected.

Could that be the path to awakening?’

Then following on that memory came the realization:

‘That is the only path to awakening.’ (eseva maggo bodhāyā’ti)

Obviously this passage directly contradicts the basic thesis of the vipassanavāda, the idea that it is possible to get awakened without jhana. This passage is hardly alone, as jhanas are an essential part of all presentations of the Buddhist path. Still, it is a powerful rhetorical statement, placed at a crucial juncture of the Buddha’s spiritual journey.

While the overall meaning of the passage is beyond doubt, the particle eva in the last line is open to interpretation. It is used in a variety of ways, usually indicating emphasis, definition, or singularity. Thus is can be translated as “really”, “indeed”, “quite”, “just”, or “only”, depending on context. Often it is not translated at all.

Recent translations have followed the latter route, with both Vens Bodhi and Thanissaro following Ñāṇamoḷi in rendering it: “That is the path to enlightenment.” Earlier translators incorporated the particle, with Chalmers saying “true” path, while Horner says this is “itself” the path.

Now, the Sri Lankan lineage of translators was strongly influenced by the vipassanavāda. Obviously it would be wrong to say that the particle was suppressed deliberately, but it is the kind of subtle shift in emphasis that easily and unconsciously slips by, shaping the way the suttas are received.

While there are no linguistic grounds to decide which approach is correct, the exact phrase is used in Dhp 274, where it must mean “only”:

Eseva maggo natthañño
This is the only path, there is no other.

This makes perfect sense in the context of MN 36. The bodhisatta is emerging from his prior practice, rejecting the mistakes in his past practice, and realizing that there is only one way forward. Ven Ñāṇatusita—so I noticed after writing the initial draft of this essay—makes exactly (eva) the same point (private document), noting that the phrase is echoing the question earlier of whether there might be another path.

Of course, it is perfectly possible that the same phrase has a different nuance in the two contexts. But given that there is a strong connection between the contexts, surely the default position is to accept that they have the same meaning, and to differentiate them only if necessary.

In this case, as in a couple of instances I have noted before, the oldest translation, by Chalmers, is the most accurate.

This is a welcome and interesting essay. Myself, being a bit cynical and irritable from jet lag today, might even believe that some translators did intentionally bypass the singularity of “eva” in order to leave open the Dhamma door to multiple paths to awakening, including vipassanavada. But, on so many levels, the subordination of jhana in Buddhism seems to me so wrongheaded, and the centuries of suppression of jhana as a fundamental practice in Buddhism strikes me as a serious mistake. Read a current copy of a Buddhist magazine, and the word “jhana” won’t appear. I get that jhana is a difficult concept and realization, and why the cultivation of jhanas might be forsaken through the years the way that exercise is forsaken by Americans in favor of diet pills. It’s easier to teach a path to awakening that doesn’t require effort or adherence to the texts; it’s easier to cultivate disciples when not much is asked of them in terms of right views, effort, or renunciation.

Obviously this passage directly contradicts the basic thesis of the vipassanavāda, the idea that it is possible to get awakened without jhana. This passage is hardly alone

Indeed AN 6.70 is crystal clear on this matter:

Bhikkhus it is impossible that a bhikkhu, without concentration that is peaceful, sublime, gained through tranquilization, and attained to unification, with the destruction of the taints, could realize for himself with direct knowledge, in this very life, the taintless liberation of mind, liberation by wisdom, and having entered upon it, could dwell in it.

It also seems that the first jhana is not enough, and that the second jhana at least is required, as indicates the expression “ekodibhāvādhigatena”.

some translators did intentionally bypass

I don’t think it really works like this. Sometimes, people might change things, not because they want to distort the teaching, but because they want to guard against what they think are misinterpretations. And that is fair enough in some cases. We always have to check how our own perspective is shaping our choices.

Incidentally, as I work closely with these translations it is clear how strongly Thanissaro was influenced by the Ñāṇamoḷi/Bodhi translations, as he regularly adopts interpretations and even exact wordings. That’s not to say that he was blindly following them, obviously his was a new translation in that tradition. Everyone—including myself—builds on previous work. But it is interesting to use the translations from a separate lineage to shake up expectations and look at different ways of approaching things.

It also seems that the first jhana is not enough, and that the second jhana at least is required, as indicates the expression “ekodibhāvādhigatena”.

that’s what i get from reading that as well, 2nd jhana is the minimum. how does this square with AN 9.36, where from first jhana, one can, (while in jhana), realize nibbana? Ven. Thanissaro takes that to mean first jhana is sufficient to attain liberation. i’m not so sure. i take that to mean someone with strong quality jhana, can realize nibbana while they’re in lower quality attainment than what their “base level” or highest level of samadhi is. An example: Ven. Ananda on the night before the first council lying down to take a rest and attaining in that lying down posture, perhaps in a first jhana.

Eseva maggo natthañño
This is the only path, there is no other.

Bhante, I agree there’s ample justification for your translation of “eva” as “only” with other passages like above and AN 6.70, AN 9.36, etc.

Thanks for correcting me on this, Bhante. I should have been more clear in alluding to, perhaps, the historic Sri Lankan or my imagined Burmese translators that may have hypothetically tangled with this issue, and certainly not Ven. Bodhi or Ajahn Geoff. No more rants from me until I’m over this jet lag…

Oops, thanks for that, it’s fixed now.

I’m rethinking my solution on this now. The problem with translating particles is that, in trying to make them clear, you end up over-determining the text, turning a nuance into a bludgeon. I’m wondering whether, rather than translating with a word, we could simply use emphasis:

That is the path to awakening.

No, it’s better. I thought using ‘only’ was just a bit too much (not that I disagree that jhana is essential to awakening). When I think of this passage and the context, I imagine the Buddha exclaiming in surprise, hence the emphasis with eva. After everything he went through with the austerities, he must have been rather shocked to realize that there was a type of pleasure that could be wholesome, i.e. the wholesome pleasure of jhana, and actually lead to awakening. Like ‘wow, so _that i_s the path’,

It’s no new revelation that the suttas are not completely congruent, they overlap, agree and disagree with each other. Thus the legitimacy of a correct path cannot be established on basis of a single sutta. So Bh. Sujato has been inspirational in his books drawing from the whole sutta pitaka. Has there been a recent scholarly attempt to prove on basis of the suttas that the vipassanavada is a legitimate path to nibbana?

It’s no new revelation that the suttas are not completely congruent, they overlap, agree and disagree with each other. Thus the legitimacy of a correct path cannot be established on basis of a single sutta.

I think a theory’s illegitimacy can be established by one sutta, provided there is no special reason to believe that sutta is inauthentic. However, we generally find hints of the same idea in other suttas, which is the case here, for example between AN 6.70 quoted above and MN 36 in the O.P.

I think in the case of vipassanavada, the confusion comes from a definition of the first jhana which according to those who defined it, can only be attained by one in a million. Some people started thinking that was unfair and that it didn’t sound like the Buddha’s teaching, but instead of questioning said definition, they invented a doctrinal workaround that is inconsistent with the suttas.

So either the Buddha’s path is indeed reachable only by one in a million or the Vsm got it wrong somewhere, which proves its opinions are questionable and must be compared with the suttas, and rejected if there is obvious contradiction (such as MN 78 in case of the Vsm definition of jhanas).

I think a theory’s illegitimacy can be established by one sutta, provided there is no special reason to believe that sutta is inauthentic.

I beg to differ in this point. Suttas are no philosophical treatises, in fact sometimes they are maddeningly short in describing unusual ideas (take the few kasina-suttas for example). Even in the best case, i.e. that two suttas in question are both authentic, it is possible that they seem irreconcilable, simply because they don’t explain a shift in perspective. Let alone early redactions with unknown adjustments. So personally I try to refrain from backing an argument with a single sutta and find it more convincing when broader cases are built.

Has there been a recent scholarly attempt to prove on basis of the suttas that the vipassanavada is a legitimate path to nibbana?

There is a Ph.D Thesis from Tzungkeun Wen on the concept of “pure-insight” meditation in Theravada Buddhism from 2009: 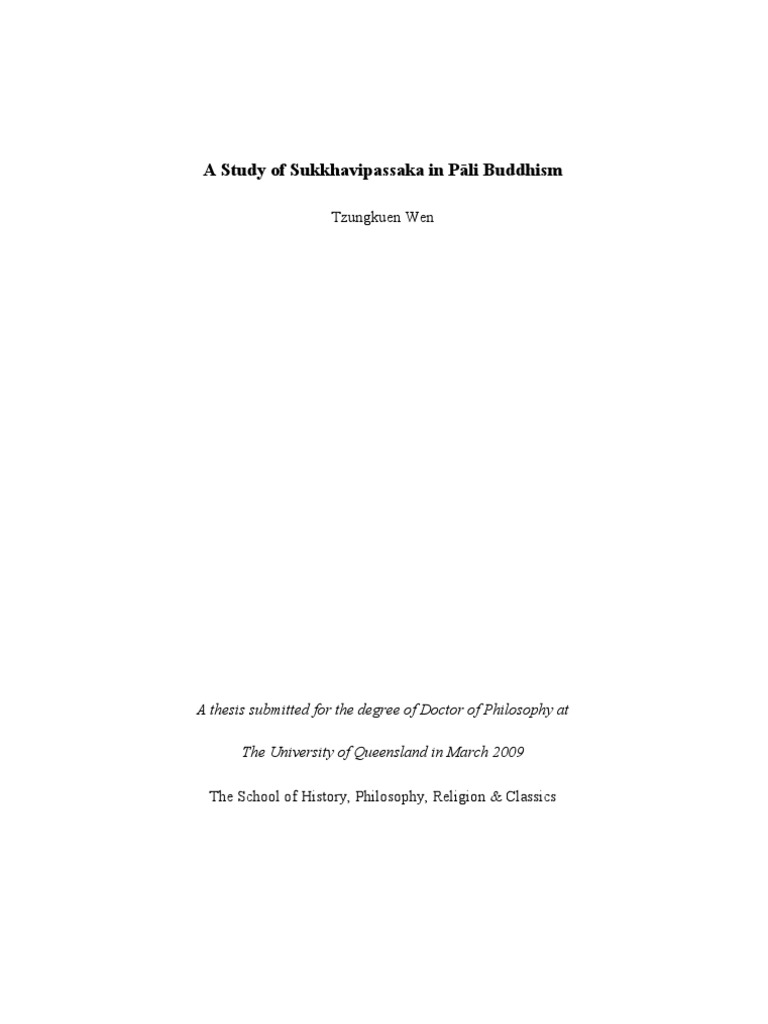 A Ph.D Thesis from Tzungkeun Wen on the concept of "pure-insight" meditation in Theravada Buddhism.

That is the path to awakening.

either way is defensible. however “only path” does look like you’re translating in reaction to corrrect biased previous translations by dry-vipassana schools.

if it was me, i wouldn’t have a problem of stepping on their toes. my only reservation would be not knowing for sure whether a simple emphatic or strongly exclusive “only” was truly intended by the Buddha, in which case the meek version seems “safer”. Linda’s interpretation makes sense too.

i wouldn’t have a problem of stepping on their toes

Well, I’ve already argued that the Satipatthana Sutta is a fake, so it’s too late to be worrying about that!

But yes, I think I’ll go with the softer version, for now at least.

Perhaps, “Just that is the path to awakening”?

It’s fine, but it doesn’t ring that well to me.

Good observation, by the way. I mean spotting the eva and taking it into account.