On the travels of the gods and the sun and moon

In our latter days, we have become so inured to centuries of theological abstraction that it is hard work to rediscover how concrete the ancients often depicted the gods. It is very widespread to find a relation between the gods and the “heavens’, i.e. the sun and moon, stars, comets, and other celestial phenomena. This correlation is a crucial aspect of Indian cosmology. As a rule, then, it is a good idea to render such ideas in the most concrete sense possible, without imposing an metaphysical abstraction to divinity, unless, of course, the context requires it.

In MN 49 we have an exchange between the Buddha and Brahmā. This discourse is one of the most theologically and philosophically daring in the whole canon, and raises all kinds of interesting issues. However, I will restrict myself to clarifying one small exchange.

When Brahmā tries to intimidate the Buddha, he responds by claiming to know just how far Brahmā’s power extends. Now, the language he uses is precise, and its implications have not well been captured.

The word juti has been rendered as “sway” (Bodhi) or “splendour” (Horner, Thanissaro). The PTS dictionary recommends a different reading (cuti) to avoid the term altogether.

But the meaning of the term is clarified in the verses below. There are two distinct criteria for judging a Brahmā’s power: the distance their domain encompasses (gati), and the spread of their light (juti). This corresponds, in the case of a minor Brahmā, to a thousand solar systems, i.e. a “galaxy”. Since this is clearly based on the idea of literal light, it’s best to keep the metaphor clear.

The verse that follows is difficult, and it is a bit of a job to figure it out. The syntax and vocabulary is unusual, as is common in verse, and while the general sense is clear enough, the exact nuance is elusive.

One problem is that the exact same passage is found as prose (AN 3.80, AN 10.29). Given that the syntax is odd, it’s likely the passage originated as verse, and is perhaps quoted as a saying. Compare with how we might quote or use a saying of Shakespeare in conversation, perhaps not even realizing it.

I find the second line here problematic. Disā must be accusative plural, and bhanti is a poetic term meaning “they shine”. Virocanā has evidently been interpreted as an adjective qualifying disā, but it bothers me. It’s an unusual term in Pali, and rarely occurs outside this context. However, in Sanskrit, while it may be an adjective, it is also recognized as a substantive, “the shining one(s)”, i.e. the sun and moon. Reading in this way makes for a more obvious reading: it becomes the subject of bhanti.

Now, Ven Ānandajoti informs me that the term candimasūriyā in the first line of the verse is, in fact hypermetrical. This strongly suggests that it was a later addition to the verse. However, if we remove it, we have no subject. Except hang on: we just solved that problem! The subject is virocanā. Presumably, as this is an unusual, poetic term, candimasūriyā was added to clarify the subject in prose. Perhaps it was later added by mistake to the verse.

In any case, we may translate:

The sun and the moon are both fair to see,
radiating as far as they revolve.
Those shining ones in the sky light up the quarters,
dispelling the darkness as they traverse the heavens.

To return to the cosmological theme, note that here the same two aspects are emphasized: travelling across the sky, and the radiance of their light. It seems that these two qualities of the heavenly bodies especially impressed the ancient Indians. The gods were like jet-setters who had slipped the surly bonds of earth.

See, too, the famous story of Rohitassa (AN 4.45, AN 4.46, SN 2.26), AKA the first astronaut, whose accomplishment was to travel on an amazing voyage across the galaxies. His story, in fact, should be regarded as the progenitor to all space operas. It’s not just that he traveled across the stars, but that he learned the essential lesson of all such journeys: your real truth lies within. There is a direct line from Rohitassa to the moment Luke Skywalker sets aside the targeting computer in Star Wars.

Just as we might be impressed by a ship that can do the Kessel run in 12 parsecs, the ancients found the magnificence of the heavenly bodies, and the gods associated with them, not just in their light, but also in their travels.

Is the word “revolve” here indicating the sense of geocentric astronomical concept where the sun revolves the earth or heliocentric where the sun is revolved by the earth?

Good point, I was thinking of mentioning this.

In fact the verb pariharati is a little vague, and could just mean “move about”, though the fact that it parallels anupariyanti in the other verse I discussed tends to confirm the idea of “revolve”.

But in any case, yes, these phrases clearly indicate a geocentric orbit. The motion of the sun and moon is always described in identical terms, as that is how they appear from earth. I haven’t researched this point, but it would be interesting to see whether the concept of a heliocentric orbit was ever developed in India.

It may be significant that the line is apparently a saying originally from verse; perhaps the Buddha is merely echoing a common saying.

Once I was a seer named Rohitassa, a student of Bhoja, a powerful sky-walker. [an4.45]

A long time ago in a galaxy far far away, indeed.

Despite issues like the one raised above about orbits, the ancient Indian cosmology is often surprisingly close to modern science.

I didn’t realize Thanissaro used that, I like it! The Pali is vehāsaṅgamo so it’s a perfectly literal rendering. I might just borrow it …

it would be interesting to see whether the concept of a heliocentric orbit was ever developed in India.

I think in Indian cosmology, especially Buddhist cosmology, heliocentric orbit is unknown. I have done a little research on this based on DPPN entry on cakkavala and Wikipedia page on Buddhist cosmology and found that according to ancient Indian cosmology which has been used in Brahmanism/Hinduism, Buddhism, and Jainism, the sun, the moon, and other celestial bodies revolve around the mount Sineru/Meru as the center of cakkavala or lokadhatu.

Here is a rough picture of Buddhist cosmology: 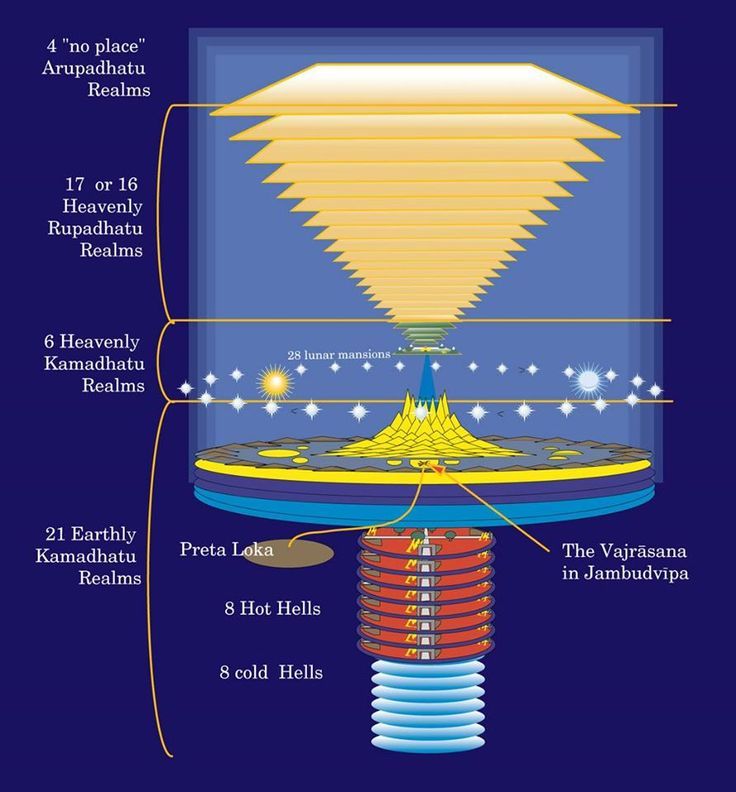 Yes, that’s the standard cosmology. But still, India is a big place, and 2,500 years is a long time. According to Wikipedia:

Indian astronomy has a long history stretching from pre-historic to modern times. Some of the earliest roots of Indian astronomy can be dated to the period of Indus Valley Civilization or earlier. Astronomy later developed as a discipline of Vedanga or one of the "auxiliary disciplines" associated with the study of the Vedas, dating 1500 BCE or older. The oldest known text is the Vedanga Jyotisha, dated to 1400–1200 BCE (with the extant form possibly from 700–600 BCE). Indian astronomy was in...

Aryabhata (circa 500 CE) explicitly mentioned that the earth rotates about its axis, thereby causing what appears to be an apparent westward motion of the stars. In his book, Aryabhatiya, he suggested that the Earth was sphere, containing a circumference of 24,835 miles (39,967 km). Aryabhata also mentioned that reflected sunlight is the cause behind the shining of the moon

Nilakanthan Somayaji, (circa 1500 CE) in his Aryabhatiyabhasya, a commentary on Aryabhata’s Aryabhatiya, developed his own computational system for a partially heliocentric planetary model, in which Mercury, Venus, Mars, Jupiter and Saturn orbit the Sun, which in turn orbits the Earth

However, true heliocentrism seems to have been unknown until the modern era, under western influence. Also, it should be borne in mind that Indian astronomy has been influenced from the West, possibly since its inception (imported from Babylon?), but certainly later. There is a text on Greek astrology in India dated 4th-6th century CE.

This isn’t to marginalize the work of the Indian astronomers and mathematicians, but to understand that they didn’t work in isolation.

Thank you, Bhante, for this valuable information

I heard that Ven Ananda asked the Buddha the shapes of the world and he supposedly said that it was shaped like to Dana bowls placed on top of each other, facing each other to make a sphere. I have not found this in the suttas. Have you seen this anywhere in the texts?

No, we don’t find this in the Suttas. If you find a reference, it would be interesting to see.

I can recommend Joel Brereton’s “Cosmograpic Images in the Brhadaranyaka Upanishad”, academia.edu

Nice article, thanks. It reminds me how powerful and complex the Vedic imagery is, and how little I know of it.