I have a question about a translation of gokāṇā as the nilgai antelope in DN 25. What was the basis for making this connection?

I ask because in DA 8 the Chinese translation seems to literally match the usual reading as “one-eyed cow” (瞎牛). It gives us a little context saying that this cow “chases what it sees on one side (only)” (偏逐所見), which I guess could be a roundabout way of saying they run in circles. Chinese translations are often confused about Asian fauna and flora, though, so I was wondering if this does in fact describe the nilgai rather than a literal one-eyed cow.

But this one-eyed cow apparently only sees in one direction.

Random fact learned while researching: There’s a wild herd of nilgai in Texas because they were brought America in the early 20th century. When I read the name Nilgai literally means “blue cow,” I laughed because in American folklore, there’s the myth of the giant Paul Bunyan who had a blue ox named Babe. Yes, America is officially old enough to have a mythology now.

Here’s a local bit of statuary illustrating the American god Paul Bunyan and his Blue Ox (found in northern Minnesota): 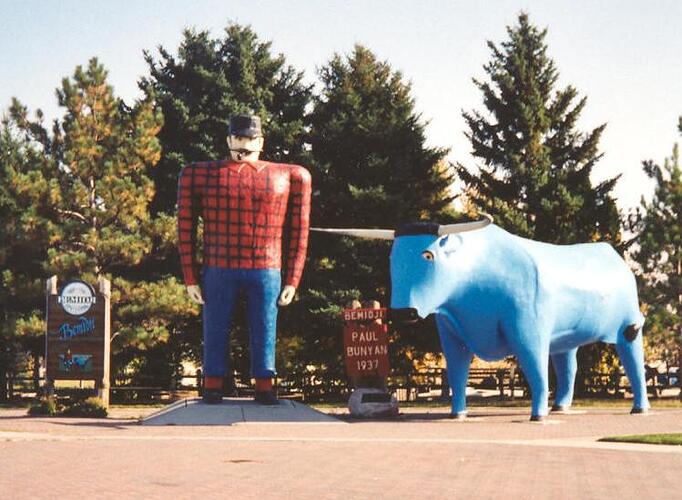 Somehow, I suspect the Nilgai and Babe are related.

Somehow, I suspect the Nilgai and Babe are related.

Lol. Wow, I had totally forgotten about Babe the Blue Ox! That’s a blast from the past.

Chinese translations are often confused about Asian fauna and flora

I wonder if the Chinese of that time knew that the translations were off? Or did they really believe there were one-eyed cows in India? If so, they must have had a really strange picture of India.

Gokaṇṇa. Nilgai, also called gokānā, Boselaphus tragocamelus (Ja.III,76; V,406). The Pāḷi name means ‘cow ear’ while the Hindi name from which the English comes, means ‘blue bull’. Looking like a cross between a horse and a bull, the nilgai is India’s largest antelope. It has an iron-blue coat, high shoulders that slope down to a low rump and the male has short conical horns. The nilgai is most often seen at dusk lurking in the jungle bordering fields in preparation for raiding them when darkness falls. Because the Buddha stood aloof from debates, at least at some period of his career, he was accused of lacking the confidence to participate in such events. The ascetic Nigrodha said of him: ‘As a nilgai circling around keeps to the fringes, so does the monk Gotama’ (D.III,38).

From: Ven. S. Dhammika’s Nature and the Environment in Early Buddhism

I wonder if the Chinese of that time knew that the translations were off? Or did they really believe there were one-eyed cows in India? If so, they must have had a really strange picture of India.

Well, the Chinese term 瞎 is usually applied to people, like a someone who has lost an eye, or they are blind in one eye. Also, the Sarvâstivāda version of DN 25 is in their Madhyama Agama (MA 104), and it uses the same translation. To top it off, the New Concise Pali Dictionary says gokāṇā means a one-eyed cow, too. So, then I’m wondering what is happening with this word.

I could imagine it could just be a folksy way of explaining an animal’s behavior: “Oh, they run in circles like they can only see with one eye.” Then they get that nickname. But as a translator, I try to track the connections down and figure out objectively (if I can) what seems like the best reading.

even worse than one-eyed cow