Monastery’s Announcement on FB (Edit: in Sinhala and English)

He was gentle and wise, always willing to serve the community, though in recent years due to debilitating illness he kept a low profile.

Photos of him live-streaming from the monastery with Sri Lankan Pāli chanting (on YouTube)
[Edit: at this moment they’re showing his body in casket as people come to pay respects ]

Thank you for sharing the information, Ayya.

Bhante Piyatissa was good to bhikkhunis.

When I was staying in Sri Lanka, some laypeople in Greenville, SC, USA, invited me to return to the 'States to keep open their little house-temple (Carolina Buddhist Vihara), after they had gone through several bhikkhu residents in a short time. I agreed. Then I researched and learned that this vihara had been founded a few years earlier not as an independent centre, but as a branch of the renowned New York Buddhist Vihara.

I informed the laity that they’d need permission from Bhante Piyatissa to put a bhikkhuni in residence. To shift a monastery from male to female (or vice versa) would be a big deal under any circumstance, but we female-monks were much more controversial back then.

On new and full moon days, we bhikkhunis have the duty and the right to request a teaching, called Ovāda, from the most revered bhikkhus. But there in Greenville, SC, I lived far from any English-speaking elder Theravada bhikkhu; the closest lived in Atlanta. So I telephoned my teacher Bhante G in West Virginia. He was willing to go along with phone-call Ovāda exhortations. But over time, I found him often out of town or not answering the phone that day. A few times when Bhante G wasn’t available I tried calling several other monks in the USA, without success, as they either weren’t senior enough or didn’t want to get involved. (When I had asked a group of bhikkhunis in Sri Lanka whether phone call Ovādas may be okay in my large country where monks may not be found for hundreds of miles, they scorned me with laughter.) One day I decided to try Bhante Piyatissa.

Ven Piyatissa was held in great esteem, and I hadn’t yet met him in person. My hands literally shook as I phoned and asked his permission to do this thing. Bhante kindly agreed!

For the next half-dozen years or so, he always kindly accepted my calls every two weeks. We hardly ever missed a moon day (a few times it slipped my mind so I phoned too late at night, and a few other times he was out of town, but that’s probably all that we missed.) He gave encouraging exhortations, usually related to meritorious deeds, and he often reminded me how precious it is to get to live the holy life. He always ended by reminding me to seek to attain Nibbāna, then chanting a blessing for me. His participation helped dignify my living of the holy life.

Whenever I went to NYC (regularly invited by a Vihara near his that would record my Dhamma talks for a cable TV show), I would always visit Bhante’s large vihara, where he welcomed me warmly like an old friend, not just a very junior monastic.

Over the years, Bhante’s strength deteriorated; an attendant would bring him the phone when I called, as he could no longer walk well. His voice also slowly deteriorated, becoming soft and distorted, making it hard to understand by phone. The sad day came, about 5 years ago, that I failed to understand anything he had said to me in greetings and in his Ovāda talk. Not a word. (I tried to respond appropriately by guessing what he was saying, and said thanks at what I hoped was his ending pause and not somewhere midway.) That was our last call.

(Around the same time, I learned that some of my sister bhikkhunis were joining together on Skype conference calls to receive the twice-monthly Ovāda talks from Bhante G, and I soon joined them.)

May Bhante Piyatissa attain Nibbāna without returning to the suffering of this world!

Thank you very much for sharing this story of generosity.

Further benefit to many!

Beautiful story, Ayya, thanks for sharing. 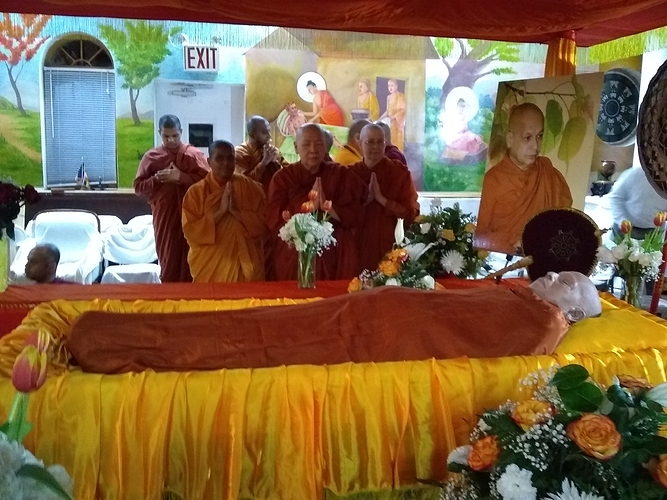 Until Ven Ayya Gotami spoke at yesterday’s service for Bhante Piyatissa to inform the gathered crowd that he was wonderfully kind to bhikkhunis, I hadn’t known that he also was behind the establishment of her centre, the Boston Buddhist Vihara. Ven Sudarshana also came to the service, flying in from Florida to pay her respects to our great kalyana mitta. 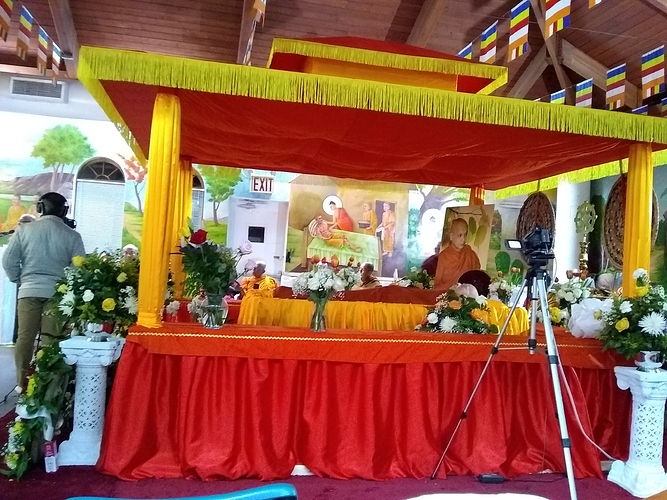 IMG_20191016_2100528503264×2448 2.2 MB
I managed to go to NYC for the main services yesterday evening for Bhante. (Thanks so much to the friend who purchased my last-minute plane ticket!) Eighty monks (80!) were there to pay last respects. They included my heroes Bhante G and Ven Bhikkhu Bodhi, and monks I’ve known over the years who have been specially kind and encouraging to me such as Bhante Kondanna and Bhante Uparatana, and Sri Lankan monks from all over the northeast region of the USA (as he was personally instrumental in their having gotten established here), and monks and nuns of various other Buddhist schools.

Many, many people from various walks of life spoke of Bhante’s extraordinary life of service and humility, mentioning countless lists of selfless work he performed for the Dhamma and for others - any one of which may have been the crowning achievement for an ordinary person.

His work on behalf of the tsunami victims, his work long ago in London that still makes positive impact, his spearheading the successful push to make our holy day of Vesak a UN recognized holiday, his interfaith outreach to other Buddhist monastics and creation of the New York Buddhist Council, his active support of the Bangladeshi community, his gentle kindness to neighbors… the list went on and on. 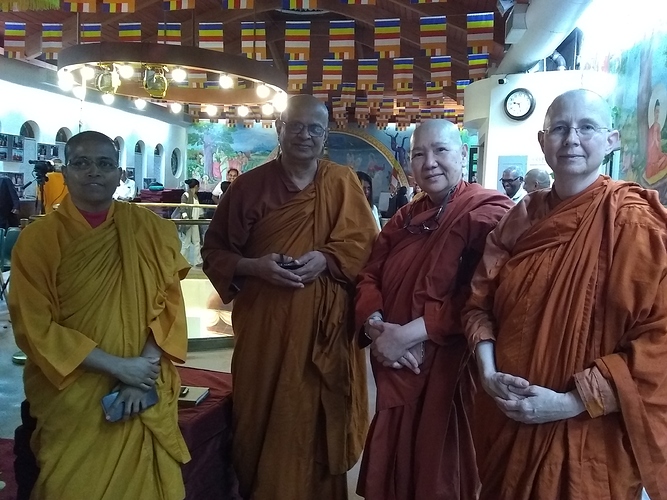 Interesting coincidences that I just realized yesterday: Ayya Gotami, originally from Thailand, became interested in the Dhamma only after she had established her career (as a psychiatrist) in the USA. I too found the Dhamma in USA after having begun professional work (as an attorney).

Bhante G (Henepola Gunaratana Nayaka Thero) gave me novice ordination in 1999, back when no one else I knew in the USA was both qualified and brave enough to do so. (He actually got death threats for ordaining his 1st female novice sometime around the late 1980’s or early 1990’s. I read the letters myself, on file in the Bhavana Society office; I put them in a separate file fervently hoping no one would throw them away.) Bhante G played an instrumental role in Ayya Gotami receiving upasampada, overcoming obstacles that had arisen, lending it credibility with his presence, and helping make sure it was a Theravada-accepted ceremony that was held in Taiwan.

Ayya Gotami landed at a Vihara with the help of Bhante Piyatissa Nayaka Thero; so did I. 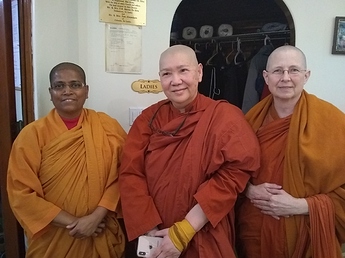 Anyone reading soon after this is posted, there will be more live-streaming soon, not sure what time, but the final pre-cremation ceremony before closing the casket will be at 10:30am EST.

Thank you for sharing this story. It’s so important that these stories are shared and those of these brave Bhikkhus and Bhikkhunis. I sometimes feel that the only way I learn of these great and kind monastics is at the time of their deaths. These stories of the great monastics in our midsts need to be told. Sadhu!

@Charlotteannun Ayya Sudhamme,
Dear Ayye, thank you very much for writing up this ever so meaningful and true memorial reflection, reminding me, with so much gratitude, of these years past. And thank you for sharing this beautiful photo–it is quite touching to see you, Ven Sudarshana Theri and Ven Gotami Theri all standing together.

Thank you Ayye! It was a deeply moving experience just to be there, and unexpectedly connecting with these two respected bhikkhunis whom I hadn’t seen in years - and had never seen together - was something beyond words.