Past Buddhas, where in time and space do we place them?

So that means that if there is truth to the account it must have happened somewhere else, not on this rock.

If there is no truth to that account then what is the explanation? Some crazy monks sneaked into the sutras a bedtime story? Can we find evidence that that was part of the mythology back in the days when the suttas were written down?

I have no bias here. Just trying to make sense of what we find written down!

I think it is safe to say we don’t have to take this material to seriously. This may be a reason this thread was shifted to the water cooler?

Like the Jataka tales there may be a moral to the story? If they were set in a realistic time-frame then fine! They may have just messed up on the time-frame. The motive behind these stories may not be hard to recognise - Buddha’s in the mix as long as the universe endures?

It could have been an attempt to produce a cosmic relevance to Buddhism when in fact it is something that happened here on Earth among human beings. Human beings are an Earth related species. These Buddha’s from the past look pretty much human - Indian in fact! Life on other planets may not look like it does here given the different conditions. A Buddha from another planet may be difficult to recognise as ‘one of us’.

The Jains and the Hindus also have stories of their tirthankaras and their avatars reaching back into the distant past. In India in the good old days if you did not have an account of your tradition on a cosmic time-scale you would not be able keep up with the competition.

Is it the case the idea of past Buddhas reflects some sort of cross pollination between Early Buddhism and Jainism?

The reason I ask it is that in Jainism there is the a concept similar to the one of past/ancient Buddha’s. They call them Tithankara: In Jainism, a tirthankara (Sanskrit: tīrthaṅkara; English: literally a 'Ford-maker') is a saviour and spiritual teacher of the dharma (righteous path). The word tirthankara signifies the founder of a tirtha, which is a fordable passage across the sea of interminable births and deaths, the saṃsāra. According to Jains, a tirthankara is a rare individual who has conquered the saṃsāra, the cycle of death and rebirth, on his own and made a path for others to follow. After understanding the true Accor...

Interestingly the dating of the immediate predecessors of Mahavira (normally identified with Nigantha Nattaputa) is less extreme than in the case of Buddha Kassapa. Jain sources place him between the 9th and 8th century BC, and historians state he may have lived in 8th or 7th century BC: Parshvanatha (Pārśvanātha), also known as Parshva (Pārśva), was the 23rd of 24 Tirthankaras (ford-maker, teacher) of Jainism. He is the earliest Jain Tirthankara who is generally acknowledged as a historical figure. His biography is uncertain, with Jain sources placing him between the 9th and 8th century BC, and historians stating he may have lived in 8th or 7th century BC. Along with Mahavira, Rishabhanatha and Neminatha, Parshvanatha is one of the four Tirthankaras who attrac Parshvanatha is sa...

According to the Buddha the tradition we call Jainism was part of an earth-bound lineage that predates his dispensation. The Buddha said he had been one of them in a past life. He was the only one he new of that had finally woken up! He seemed to find their practices and beliefs pernicious. I don’t think they had much time for him either!

Dear gnlaera, it is also interesting that the language used in your post on Jainism is so similar to the Buddha’s - crossing the water to the other shore - whether it is an ocean or a river. The Tirthankaras are also liberated by themselves - they are not shravakas etc. They do not rely on the grace of a Guru or Deva! The Buddha may have been particularly conscious of the Jain Dharma when establishing his own. He was offering to deliver what the Jains could not? We may owe a lot to the Jains for the kind of language the Buddha used to elucidate his Dhamma? The stories of ancient Buddha’s may have been an attempt to ‘Keep up with the Jains’s’?

I met a Jain in one of their temples in India and he was quick to point out how Buddhism was a copy-cat religion that was modelled on a Jain template. If they did have a similar model in their Dhamma - if only superficially - and they used it first then, there might be something true about what the Jain told me?

Interestingly the dating of the immediate predecessors of Mahavira (normally identified with Nigantha Nattaputa) is less extreme than in the case of Buddha Kassapa. Jain sources place him between the 9th and 8th century BC, and historians state he may have lived in 8th or 7th century BC:

But the guy before him was 30 meters tall and 1000 years old, so we’re back to magical numbers territory. The EBT’s also mention humans having lifespans of tens of thousands of years at the time of previous Buddhas so placing them billions of years in the past is not the only thing that doesn’t fit with our current understanding of the evolution of life on Earth.

I guess if you believe in devas you could imagine some sort of “humans” with mind-made bodies messing around on earth millions and maybe even billions of years ago. But I think these big numbers have most likely creeped into the EBTs after the Buddha to impress people at the time. It seems to me the Buddha would rather use similes to drive his message home when talking about things we would nowadays measure in millions and billions.

I think they also had an enormous number of ribs - the ancient Jains! The Buddha was not averse to big numbers. Big numbers were all the rage in ancient India - the Brahmins were particularly fond of them.

Ultimately there are no hard facts or evidence to prove what is being discussed- but I can saw the ability to give rise to awe is a sign of a healthy mind. The subject matter doesn’t have to be religious- it can be the nature of the material universe or biology, but there are many awe inspiring phenomena out there. Being cynical or having a silo mentality is a sign of a unhealthy mind or at least an unimaginative one, and neither of these states are conducive to development of a mental state conducive to joy and the path.

The London Hammer (also known as the “London Artifact”) is a name given to a hammer made of iron and wood that was found in London, Texas in 1936. Part of the hammer is embedded in a limy rock concretion, leading to it being regarded by some as an anomalous artifact, asking how an obviously man-made tool could come to be encased in a 400 million year old rock.[1][2]

The London Hammer (also known as the "London Artifact") is a name given to a hammer made of iron and wood that was found in London, Texas in 1936. Part of the hammer is embedded in a limy rock concretion, leading to it being regarded by some as an anomalous artifact, asking how an obviously man-made tool could come to be encased in a 400 million year old rock. The hammer was purportedly found by a local couple, Max Hahn and his wife, while out walking along the course of the Red Creek near the to...

J.R. Cole (of the National Center for Science Education) states: “The stone is real, and it looks impressive to someone unfamiliar with geological processes. How could a modern artifact be stuck in Ordovician rock? The answer is that the concretion itself is not Ordovician. Minerals in solution can harden around an intrusive object dropped in a crack or simply left on the ground if the source rock (in this case, reportedly Ordovician) is chemically soluble.”

Do you think this is evidence of something else?

was watching Ancient Aliens and went over the story of that hammer and I remembered that topic.

An out-of-place artifact (OOPArt) is an artifact of historical, archaeological, or paleontological interest found in an unusual context, that challenges conventional historical chronology by being "too advanced" for the level of civilization that existed at the time, or showing "human presence" before humans were known to exist. The term is rarely used by historians or scientists. Its use is largely confined to cryptozoologists, proponents of ancient astronaut theories, Young Earth creationists, ...

The bridge was first mentioned in the ancient Indian Sanskrit epic Ramayana of Valmiki.[4] The name Rama’s Bridge or Rama Setu (Sanskrit; setu: bridge) refers to the bridge built by the Vanara (ape men) army of Rama in Hindu theology with instructions from Nala,[5] which he used to reach Lanka and rescue his wife Sita from the Rakshasa king, Ravana.[4] The Ramayana attributes the building of this bridge to Rama in verse 2-22-76, naming it as Setubandhanam, a name that persists until today.[6]

The Bhagavad-Gita, Oppenheimer and Nuclear weapons

It’s actually an example of how foolish ideas get uncritically passed on. 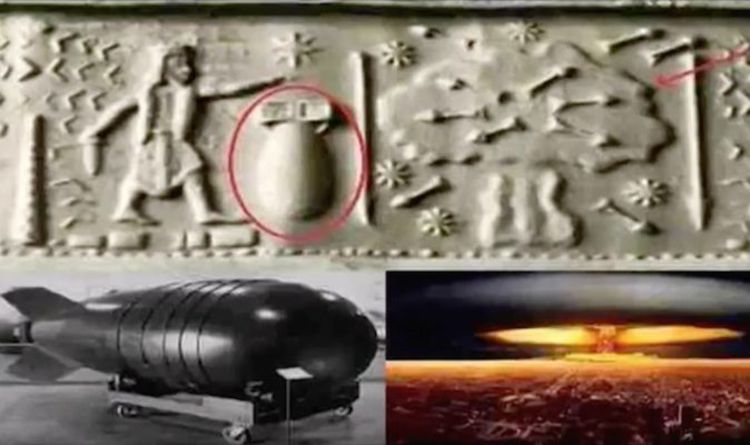 A NUCLEAR bomb blast killed half a million people in India 12,000 years ago, according to shocking claims being made. The facts behind an urban legend claiming a nuclear war in India some 12,000 years ago.

I’m afraid this sort of thing is akin to conspiracy theories & alien abductions, and it’s embarrassing to see people believe this sort of tabloid garbage.

many people think so about religions.

“this sort of tabloid garbage.”

…so what? That doesn’t change the content, nor the applicability, of the substantive criticisms I’ve cited.

A 9.7-million-year-old discovery has left a team of German scientists scratching their heads. The teeth seem to belong to a species only known to have appeared in Africa several million years later. A 9.7-million-year-old discovery has left a team of German scientists scratching their heads. The teeth seem to belong to a species only known to have appeared in Africa several million years later.

Will 10-million year-old teeth crown Europe as the ‘cradle of humanity’?
Discovery in Germany raise big questions about the the forebears of mankind. 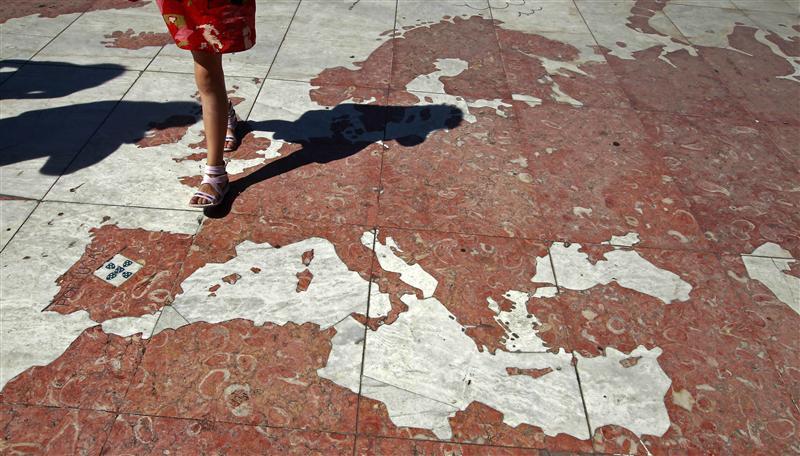 Will 10-million year-old teeth crown Europe as the 'cradle of humanity'?

Discovery in Germany raise big questions about the the forebears of mankind.

Another recent discovery in India:

Early Middle Palaeolithic culture in India around 385–172 ka reframes Out of...

Lithic assemblages from the archaeological site of Attirampakkam, India, document processes of transition from Acheulian to Middle Palaeolithic cultures and substantial behavioural changes around 385,000 years ago and thereafter.

Morality: we don’t really know much… the more we look, the more questions are raised. I’ve been interested by science and the past for a long time, but now I came to a point in my life were I realized that the quest for understanding the external world (i.e. science) is endless and ultimately quite frustrating, leading me to a thirst for internal knowledge.

Still, it would be nice to have some amazing discoveries about our past in the near future!