I just read this now from one of the most important researchers in the recent history of Burma. Please excuse me if this passage, or this research, is already known to you. I know that there has been a lot of research and examination of the matter of Bhikkhuni ordination, including the historical dimension of it. However just in case you didn’t already know about this, i have to say that Professor Than Tun (d. 2005) was one of the most eminent researchers in Burma, with his PhD done at London University, and long time visiting professor in Japan and USA. The text below suggests that he knew much more than just this passage, regarding this matter, and I am tempted to investigate if he had written about the historical presence of Bhikkhunis in Burma in more detail. Here is the quote:

There is another important point in the Buddhism during the period under survey [AD1000-1300]. That is the presence of ‘bikkhuni’ in the Order then. According to tradition there have been no female ascetics in the Buddhist Order since AD 456. But we find epigraphic evidence assuring their presence even in the 13th century. I am sorry that I do not gave time to go into some details of this very important point. The following are a few popular names of the ‘bikkhuni’: Phun-mlat-so Uiw Chi Taw, Skhin Uiw Kram Pan San, Uin Chi Up Ni, Skhin Brahmacari, Phlun-mlat-so Uih Tan San, and Skhin Uiw Pam.
_p. 44. Essays on the History and Buddhism of Burma. by Professor Than Tun. Kiscadale Publications. 1988.

Thank you, Bhante, for sharing this information!

Indeed, yes, this is fascinating, and more information would be lovely. I have previously seen reference to a royal edict from the 19th century that referred to bhikkhunis in Myanmar. But it is hard to confirm such things or, without relevant experience in the field, to assess their importance.

There should be no surprise to see such materials from time to time. We are not the first generation to think that it’s a good idea to treat women with common decency and kindness!

The professor Than Tun seem to have had access to historical documents in this case, with the specific names of bhikkhunis and all. What is also note worthy is the early date given here, 13th century CE. And this is the date of the recorded events in the documents, not that of the establishment of the Bhikkhuni Order, which who knows how far back in time it stretches; 456, AD, perhaps?!

We are not the first generation to think that it’s a good idea to treat women with common decency and kindness!

This immediately reminded me of that: 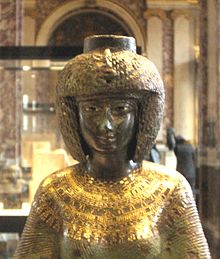 K. Meritmut, high priestess of ancient Egypt. Nothing so unique about her except that this wonderful statue of her survived nearly intact all that time. But to be a high priestess in as early as 3000BCE, was very common. A high priestess is like an Abbot of an important temple, with responsibility for the training of many monks and nuns and novices under her.