I hope I have posted this topic at the right place…

Has anyone tried offline suttacentral.net on an iPad? I figured it would only be possible with application such as localhtml or sites-2-go-lite. With the free versions, I could only test it with a very small subset of the offline files. To do a full test, I need to buy the app. I didn’t want to pay before I know it will work.

Appreciate any ideas you may have.

You should be able to download and run the full site from our downloads page. Using a tool such as you mention may well work, too, but I haven’t tried.

As far as apps go, there’s no official SuttaCentral apps for iOS or Android (only an unofficial and broken Android app). If we do ever make an app, however it will be free. There’s nothing, in theory, that prevents a thrid party from making a paid SC app, however most of the translated texts are released under non-commercial licences, so they couldn’t be included.

Thank you for your reply.

I tried downloading the zip file with Safari in Ipad mini and it gave me an error : 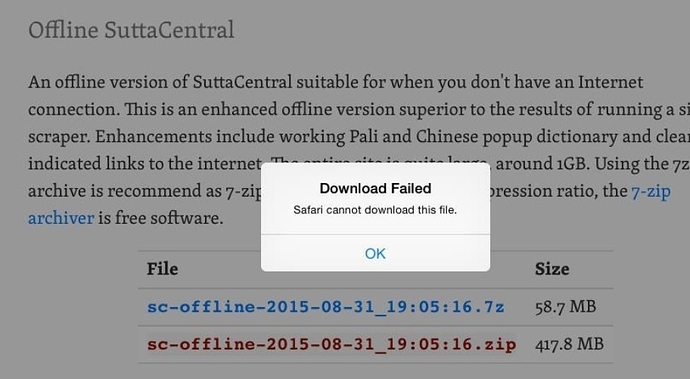 I tested with a paid version of localhtml and wasn’t successful. I contacted the developer and he/she said the biggest site tested was 700 MB and suggested I broke the site to smaller ones… Maybe I will try one day…

For Android users, no problem of running the offline site. For IOS, I think an app would really help those without decent internet connection if we couldn’t get the offline site working in IOS without using a third party app…

Hi ph_k, sorry about not responding sooner, I must have missed this message.

Unfortunately I don’t have any experience using iOS so I can’t say what the problem is. Perhaps other users can help?

Just having a quick look, articles such as this seem to suggest that it is necessary to install an unzipping app to handle zip files.