Violating my earlier promise to myself of leaving the place just to post this. Feel free to remove. 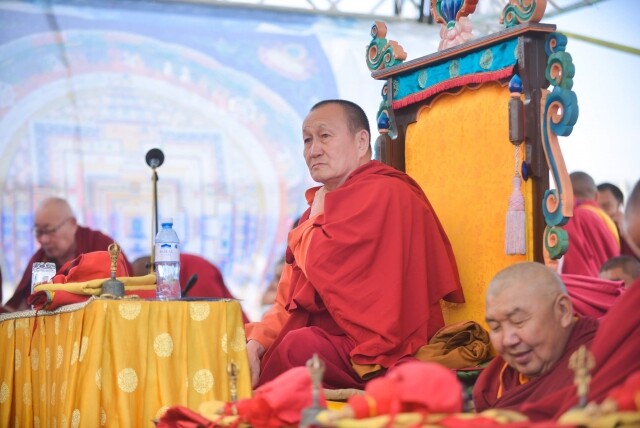 “Buddha is with us” - the head of the Buddhists of Russia about the special operation (aka war with Ukraine)
ULAN-UDE, March 3, 2022, 12:24 — REGNUM The head of the traditional Buddhist Sangha of Russia, Khambo Lama Damba Ayusheev, said that he was praying for the military personnel participating in the special military operation (this is how by law this war must be referred to in ruzzia - my note) in Ukraine. At the same time, he urged Buddhists to maintain harmony and calmness, according to the portal Infpol.
According to the clergyman, Buddhists must maintain peace and harmony, but they live in a single Russian state and must protect the interests of the country against which a dirty information war is unleashed.
“We must have a strong and reliable rear. With us are our sahusans (deities, defenders of Buddhist teachings, approx. IA REGNUM), with us are our great Hambo Lamas, with us is the Buddha, ”he stressed. 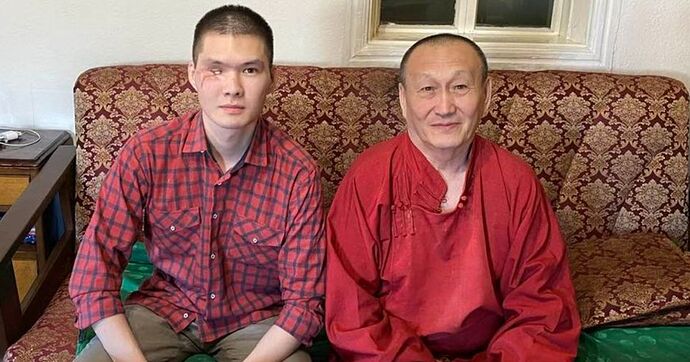 Lama Damba Ayusheev’s nephew returned wounded from a special operation (aka war) in Ukraine
Buryatia, 2.07.22 (IA Teleinform), - The head of the Buddhist traditional sangha of Russia, Pandito Khambo Lama Damba Ayusheev, posted on social networks a photograph where he sits next to his cousin’s son who was injured in Ukraine and was left without one eye.
“The cousin’s son Chingis Daindarov is on leave from the 37th brigade due to injury sustained during the special operation (aka war) in Ukraine ,” that’s how Lama Damba Ayusheev captioned the photo on Facebook (a social network recognized as extremist in Russia), published on June 30, 2022.

Members of traditionally Buddhist Buryat and Tuvan minorities have been prominent participants in the first stages of the war, as well as perpetrators of war crimes.

To my knowledge no Buddhist in russia publicly denounced the war.

My letter to the office of Dalai Lama with request to condemn participation of russian minorities, traditionally considered Buddhist, in the war was not answered

" Not all Russian Buddhists share the same sentiment. For instance, the Buddhist journal Buddhism of Russia, founded in 1992, issued a series of statements condemning the war in Ukraine and called its readers to sign anti-war petitions. Its editor, Russian Buddhologist Andrey Terentiev condemned Ayusheev’s position, contrasting it with the Dalai Lama’s and saying that “Buddha is with everybody who is against the military action.”—BYU Law

“for many young Buryats in Russia, joining the Armed Forces is the only way to get a stable income.”—Free Buryat Foundation

“As well as releasing videos in which Buryats condemn the Russian invasion of Ukraine, the group provides legal advice to Buryat servicemen who do not want to fight, and monitors the number of Buryats killed and wounded in the ongoing conflict.”

• Racism against Buryats in Russia:

"And the deputy head of the Free Buryatia Foundation Viktoria Maladaeva, received hundreds of insults and threats because of her ethnicity when she won the 2014 Mrs. St. Petersburg beauty pageant.

“Living in Moscow and St. Petersburg, we encountered racism on a daily basis,” said Garmazhapova, which is why she has been particularly angered by Russian claims to be “de-nazifying” Ukraine." 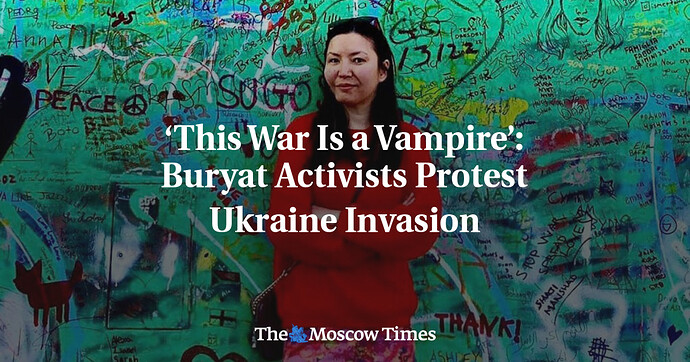 ‘This War Is a Vampire’: Buryat Activists Protest Ukraine Invasion - The...

“When Ukrainians talk about Russian troops, they always mention Buryats and Chechens,” one activist said. “We do not want this reputation.”

This illustrates how in practical matters secular groups are more reliable and active than organized religion.

Given the intense censorship in Russia at the moment, I think this is about as much as they can do. He’s highlighting the human cost of the war with that photograph and called for peace within the confines of what he’s allowed to say… Not everyone is so brave as to face jail, and for the leader of an already-persecuted minority in an oppressive regime, it can be dangerous to your entire community to speak too-plainly.

Not everyone is so brave as to face jail, and for the leader of an already-persecuted minority in an oppressive regime, it can be dangerous to your entire community to speak too-plainly

Facts. People who complain about what others do not say inside the belly of the beast are usually the ones who aren’t in danger of being disappeared.

I have as much sympathy for people in Russia, especially minorities who are being thrown into the military meat grinder, as I do the Ukrainians

Bhante, this is undoubtedly a noble way to think, but I watched quite a number if interviews and talks with thia lama. He’s quite sincere in his words, trust me. There’s no double entendre or subtle condemnation.

Which I think is a pity, because I believe you may have different opinions and points if view on anything, including this war, but the Buddha was unequivocal in his strong condemnation of violence, especially in Dhamma contexts. So, the smart way for a Buddhust clergyman, even if he considers himself a Russian patriot and supporter of the war, would have been to keep noble silence. Alas, this is not what has happened.

Thanks for speaking out, and for doing what you can.

So, the smart way for a Buddhust clergyman, even if he considers himself a Russian patriot and supporter of the war, would have been to keep noble silence.

I agree whole-heartedly. Silence sends its own message.

Since it apparently needs saying, let me say it.

The Russian invasion of Ukraine and the ongoing war of attrition is a genocidal war of imperial ambition. There are no “both sides” in this war. There was no provocation by Ukraine, and no justification, even if one was to follow a just war doctrine (which I do not). The entire responsibility for the war rests on the shoulders of Vladimir Putin and those who have voted for him and otherwise supported and enabled him. Putin is a brutal, murderous, psychopathic despot devoid of morality. He has engineered the degeneration of the Russian state to an instrument of evil. If he is not stopped, he will do it again, and worse. He, and many of those fighting his war, are guilty of terrible war crimes and must be prosecuted for them.

And I give thanks that I live in a country where I can speak the truth without fear of the consequences.

Religion always been a political tool

To my knowledge no Buddhist in russia publicly denounced the war.

Ven. Bhante Kittisaro, a theravada buddhist, in straight and tough words condemned the war, the russian government in his Facebook. That proclamation has been there some period of time. Later he restricted the reading of his page for all. Despite the fact that it was only on Facebook and the page was not seen open for a long time, I think that he did a very courageous act, given that the authorities in Russia give prison sentences and huge fines for such posts on social networks.

All this only shows once again that it is Theravada Buddhism that is on the bright side.