Many congratulations to the bhikkhunis who were ordained this past weekend at Santi Forest Monastery; namely, Ayya Vajirā, Ayya Dhammavatī, and Ayya Santacārī.

You can read about the beautiful ordination here:
http://santifm.org/santi/2016/09/07/first-bhikkhuni-upasampada-for-santi-and-for-nsw/

Also, congratulations to the wonderful Ayya @Vimala on the occasion of her upasampada in California last month!

Also, congratulation to the wonderful Ayya @Vimala on the occasion of her upasampada in California last month!

i just recently wondered why Ayya Vimala was still a samaneri

Thank you, @Brenna, that we may all rejoice in the going forth of these bikkhunis! May they all attain the fruits of the path in this very life!

Cool, I was going to post the same thing, but now you’ve done it!

i guess there should be a video somewhere 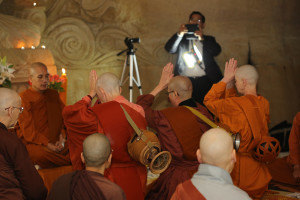 About Us
Samita ASBL> About Us

In 2010, Margo (now Samaneri Vimala) and a friend had the idea to start a forest monastery in the Theravada tradition in Europe.

the description needs an update

Thank you so much for sharing! Sadhu! Sadhu! Sadhu! It’s so wonderful to see the Bhikkhuni Saṅgha thriving and continuing to grow. May more women find the opportunity to go forth. So inspiring:slight_smile:!

Here is a follow up with photos from the Bhikkhu’s Confirmation ceremony at Bhodinyana.

Ayya Vajira took some video too, but I don’t know if it’s online. It was a lovely ceremony so I hope it can be shared.

The video from the Santi side of the ceremony has just been uploaded.
You can find it here YouTube