sabbe sankhara anicca…
Unfortunately while attempting to perform your search the server encountered an error, this condition should be temporary so please try again a few times.

If the problem persists then an error report will be automatically sent to the Sutta Central developers who will fix the problem promptly.

unluckily this causes unavailability of the Pali dictionaries

am i correct that the Pali dictionaries here aren’t accessible by themselves at a designated URL and only work in conjunction with texts?

Thanks for the heads up, we’re looking into it. Sometimes it takes a little while to respond because of time zones: I’m in Oz, @blake is in Europe.

As far as using dictionaries, you’re correct, there is only the search interface. However the dictionaries are available elsewhere.

I don’t know if anyone is else is having this problem: on my iPhone when I access Sutta Central through Safari I am incapable of searching for any term and having it wield results. For instance, I searched for Buddha, Dhamma, Sangha,
dawn, & satta, and each query results in a failed search.

I know that Sutta Central isn’t necessarily designed to be optimized for every search engine – but I at least though you should be aware of the problem.

May you be well.

The search engine is broken right now, and @blake seems to be away from his computer for a couple of days, but we’ll get it back ASAP.

Thanks for the update. SC search is a valuable tool, I use it almost daily in preparing my videos. Hope to see it back up soon!

Search is back up now. There might be some stability problem so I’ll keep an eye on it.

edit: I believe I also determined the underlying cause.

and so does autofill

Thanks, we’re looking into it.

The Discuss and Discover link is also missing from the sutta sidebar. 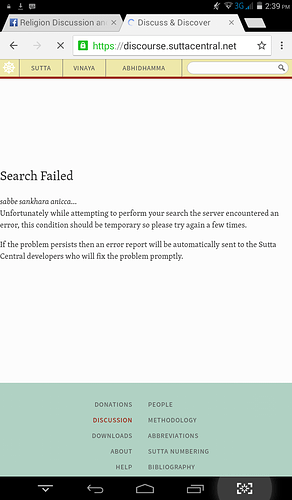 I have no problems with it at the moment …

It was broken for me a couple of hours ago, now it is fine, but the autocomplete is off.

yes, search is up at the moment but autocomplete is indeed down