Branching from the discussion Errors and omissions in Ven. Thanissaro's translations:

Am I right to think that the green D&D link is being referred to here? 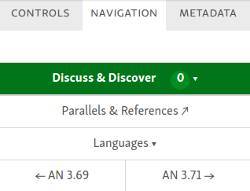 If so, I’d considered mentioning earlier in the week that this doesn’t appear to be working (in that instance I was looking at AN 8.64). I’ve tried in both Firefox and Chrome on Linux Mint.

If not, where do the comments show up?

Do you mean how do you get the menu to come up? If so click on the ‘hamburger’ symbol in the top left:

But as mentioned in my original post, I don’t think this function is working properly at the minute.

Thanks, Aminah.
Yes, I can’t see ‘hamburger’ symbol on my screen.

Hmmm, right, well in that case I can only think of two things: 1) you’re using a device I’ve absolutely no clue about - sorry

, or 2) you might need to scroll up for the top menu bar to display (SC does a neat ‘auto-menu-bar-go-away’ trick to get rid of screen clutter while one is reading).

Never mind!
Now, I got one less thing to worry about.

It is quite ok.
I have no clue for myself.
I have Windows 10.
It does it’s own thing as it wishes.
The good thing about this is it gives me answers when I ask questions.

Well now I’m really stumped - it should be basically as pictured above. I just used a Windows 10 / Edge simulator and it appears just as it does for me.

In any case, I quite appreciate the giggle.

Yes, I can’t see ‘hamburger’ symbol on my screen.

Maybe you are not in the right “view”. You have to open a sutta text first before the hamburger icons shows. It should have nothing to do with your browser or operating system. It does not show on the homepage or in the sutta-lists.

Am I right to think that the green D&D link is being referred to here?

Thank you for pointing this out! Yes, you are right and as your screenshot shows “0”, which should mean that there are no references to that sutta. However, when I click on MN10, the Sati­paṭṭhā­na­sutta, I’m sure there should be some at least so I think this function is broken. @Blake, can you have a look at this?

Maybe you are not in the right “view”.

Thanks, I got it.
It seems to be a great feature.

so I think this function is broken. @Blake, can you have a look at this?

only appers when you’re on a sutta and either at the top of the page or scrolling up; if you’re scrolling down the whole “navbar” (hamburger included) disappears, for readability I assume.

Thanks so much @SCMatt. I’ve got the ‘navbar’ set to stay put but I didn’t realize the ‘hamburger’ only shows up when in a sutta which of course makes sense. So, it’s working fine on my sytem.

FYI I’m working on this. It appears that a Discourse update has caused the Discourse-side plugin to stop working, altough it silently fails to return anything rather than failing with errors.